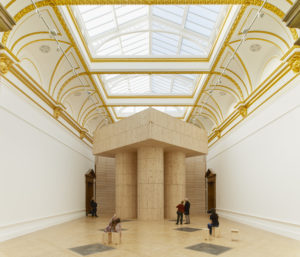 Here is a great idea for a show. The Royal Academy of Arts has invited seven international architects to transform its main galleries with site-specific installations. The goal, in the words of Kate Goodwin, the RA’s Drue Heinz Curator of Architecture, is “to heighten our awareness of the sensory realm of architecture and thereby encourage the creation of a more rewarding built environment.”

In the first room, Chilean duo Pezo von Ellrichshausen have assembled a towering, bastion-like structure from prefabricated sections of untreated pine board. Think Fort William Henry as if flatpacked by IKEA. The result is uplifting, literally so: you can ascend either via one of four spiral staircases built into the tubular supports, or by the enclosed ramp at the back. The viewing platform at the top, almost level with the skylight, affords not only rewarding close-ups of the Beaux Arts angels under the roof, but also, if you are tall enough to see over the parapet, a sweeping panorama of the main gallery.

Very different is the next installation by Kengo Kuma, which takes its inspiration from Japanese temple ceremony and is all about scent. Here, in two darkened spaces (one of which I seem to remember used to be the Small Weston Room), he has built fragile structures from slender bamboo strips soaked in essence of cypress and tatami and bent into shapes which mimic flickering tongues of fire. The effect is transcendental and more than a little eerie.

Kuma’s delicate tracery is as solid as the Great Pyramid of Giza compared with the next piece, a rickety cage of polypropylene panels jammed into the junction between adjoining rooms. It is the work of Diebedo Francis Kere, whose office is in Berlin but who hails from Burkina Faso, West Africa. Kere’s avowed aim is to compel us uptight Westerners into close proximity through group exploration (he obviously hasn’t been on the rush hour Tube recently). Visitor involvement is further encouraged by the opportunity — which kids are going to love — to poke brightly colored straws into the honeycomb structure. Expect log jams at this point.

Meanwhile, at the other end, both of the show and of the sensory spectrum, Dublin’s Grafton Architects explore the effect of light and dark in adjoining rooms. In the first, suspended interlocking panels rain down shafts of natural light; in the second, they send your eye soaring up into a murky void, to what seems like an impossible height. The effect is pure Indiana Jones and the Temple of Doom, and it’s easy to forget that it’s just an illusion conjured up from MDF, calico, mortar sand, and household emulsion paint.

For me, though, the best piece in the show was the installation created by Chinese architect Li Xiaodong. You begin in a labyrinth formed from four metre-high tiers of hazel sticks, weirdly uplit by white acrylic panels set in the floor, which Li says was inspired by his memories of walking in forests in the snow. After wandering for a while in a daze of disorientation and discovery, the space suddenly opens up and you’re in a mirrored zen garden, crunching across its stone-covered floor. In looking for reasons as to why this works so well, it’s probably because Li’s contribution seems more grounded in the real thing — less of a jeu d’esprit — than the rest of the show. His design for the Liyuan Library near Beijing, completed in 2011, uses the same firewood material as cladding, and for a practical reason as well: to channel light.

Although the accompanying “architectspeak” occasionally grates (“Space for an architect does not exist, so we design the limits that give the impression of space”), this is a refreshing departure from the traditional format of the architecture show, with its elevations, models and isometric projections. It may all just be smoke and mirrors, but it does make you rethink our built environment, and if nothing else it’s a fun escape on a fogbound and dreary London day.