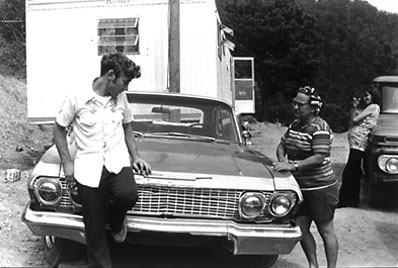 Sandra Phillips, curator of photography at the San Francisco Museum of Modern Art, has once again mounted a noteworthy exhibit, this time the first survey of the work of William Gedney (1932-1989). Gedney, while not an unknown – he had a one man show at New York’s Museum of Modern Art in 1968 – is surely little known. This handsome exhibit and a recently published book should help, deservedly, to bring Gedney’s work to a wider audience. There is also a superb website at Duke University, whose archives are the major repository of Gedney’s photographs and papers.

Gedney, who died of AIDS, was never openly gay in his life, and, according to his friend Maria Friedlander, he was a very private person who tended to compartmentalize his relationships: no one seemed to know the whole man. (In a 1969 self-portrait his head is completely hidden, lending new meaning to "self-effacement.") For the viewer, though, Gedney’s work tells a great deal about the man – the body of work after all tells us what he wanted us to know, if not sometimes a little bit more. Gedney was not a sensationalist; his images tend to find people in quiet, often isolated moments, with a repeated sense of separation, even within the crowd. There is a gentleness, a sympathy, and a nonjudgmental eye behind these glimpses into varied, but, more often than not, marginalized lives.

In the late 1960’s Gedney was drawn to the Haight-Ashbury district of San Francisco where his camera observed the lives of hippies, that great blossoming moment of experimentation with drugs and sex and ideals of peace and love and communal living. Couples clinging together, people sleeping on bare mattresses, crowds of faces at a concert – Gedney’s pictures reveal the many-faceted complexities of that moment in human experience, including both the joy and the underside of seamy disillusionment.

Gedney spent time in Kentucky in the early 1970’s where he was interested in the lives of coal mining families. While the trailer or shanty housed miners lived in conditions of poverty, Gedney focused on the more positive side of their lives. The women may be pregnant, the kids look underfed, but a palpable sense of warm family connections emanates from these pictures. Their shiny Chevrolets become a symbol of pride, the one possession conferring a modicum of material dignity.

There are pictures from a trip to India and there are pictures of New York as well, including the brilliant Brooklyn streetscape included on this page: a curtained window in the foreground adds mystery to a dark street, one shop window brightly lit, two solitary figures making their separate ways in an otherwise deserted urban setting. It’s an Edward Hopper moment, but it’s all Gedney, too. And it relates to another street scene – a girl sleeping in the foreground corner of a dark Benares street lined by classical columns. A portrait of a sloe-eyed Indian boy hugging his arms to himself echoes in another portrait of an American boy in a denim jacket, arms crossed, and yet again in a portrait of another boy playing a harmonica.

Gedney’s work isn’t edgy or gimmicky. It is the work of an observant and perceptive artist who saw the world from his own distinctive point of view – knowledgeable, sophisticated, informed, humanistic – and presented it in quiet, unsentimental images that have cumulative power.