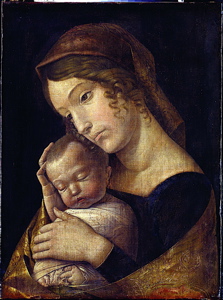 Andrea Mantegna, The Virgin with the Sleeping Child, 1465/70. Oil on canvas.

The exhibition with the unwieldy titleThe State Museums of Berlin and the Legacy of James Simon, currently at the Legion of Honor in San Francisco, is as much a case study in late 19th century and early 20th century European art collecting as it is an art show. The exhibition is an illustration of one particular collector’s lifelong fever of buying and foraging for great art, and by extension a curious presentation of some of the cultural inclinations of his time.

It is best to embrace the exhibition’s sense of breadth rather than to go looking for depth; quality there is, but it is the realization that this is a relatively small sampling of the sheer quantity of James Simon’s possessions that will stagger you in the end. The exhibit is but a swig from the keg you would find if you were to visit Berlin, where the State Museums house the massive donations that James Simon made to the city that was his home.

James Simon (pronounced Zee-MONE in German) was born in 1851 into a prosperous German Jewish family. His father ran a successful textile business in Germany, called Simon Brothers (Gebrüder Simon), which had the good fortune and business savvy to capitalize on the abrupt decline in cotton production in the United States during the years of the Civil War and its aftermath. The company’s cotton wholesale business soared, and Simon Brothers became a merchant prince success story.

It appears from biographical data that James Simon would have preferred an academic career (of primary interest was philology), but succumbed to familial obligations when he took over the family business in 1876 with his cousin Edouard. The business thrived, and Simon took a lot of his personal wealth and put it where his heart lay, into the acquisition of works of artistic and cultural merit. Thus began a vocation that took up the rest of his life and resulted in a massive art collection, much of which he eventually donated to Berlin’s museums.

Simon’s patronage knew no bounds. His collecting career started with the purchase of Dutch paintings of the 17th century, but quickly branched out to other countries, other centuries. The exhibition does a good job of recreating this buying frenzy in what it has chosen to display, and how. Each room is a smorgasbord of artistic samples from different continents and different eras, from the ancient Egyptians to the East Asians, from early Renaissance to late Baroque. In the final three rooms filled with European works, many of the master artists are gathered—Andrea Mantegna, Andrea della Robbia, Bernando Strozzi, Gainsborough, Renoir.

Scattered about among the masterworks and not so major works of second-tier artists, are some very beautiful examples of wood sculpture. Reading the descriptions of these various pieces, one is reminded of a vast orchard of trees, and how Germany at one time was covered with forests. Names on the title cards mention applewood, pearwood, lindenwood, oak, walnut. Unlike the marble statues of the Italians, these carvings are dark and heavy; their earthbound beauty suggests how the quality of a land’s material might infuse and reflect the spirit of its people.

There is an aimless quality to Simon’s art collecting, but his foray into antiquities produced a prodigious amount of archaeological treasures, and it is his greatest achievement. Simon financed several now historic expeditions to the Middle East, where excavations in places like Amarna and Mesopotamia unearthed some of the most rare and important art works from antiquity. It is these treasures that grace the first rooms of the Legion of Honor’s exhibition, and the sheer force of their power will affect even those who normally nod off at the first sight of anything before the rules of perspective came along, or at least anything before the Greeks. As we make our way past the exhibit’s welcome card, a bust of Nefertiti (not the famous one, which didn’t make the trip from Berlin, but still a charming likeness of the swan-necked beauty), we find encased in a glass box a bust much smaller and yet far more intriguing. Not much larger than the head of a Barbie doll, the figure is of Queen Tiye, who was Nefertiti’s mother-in-law. Queen Tiye was the wife of Amenhotep III and the mother of Egypt’s most powerful pharaoh Amenhotep IV, otherwise known as Akhenaten (r. 1353-1336 B.C.). In this rendering, however, she looks like an ordinary middle-aged woman, still beautiful but showing signs of age and fatigue. She also looks black, which should not have surprised me, since Egypt is a part of Africa. The facial features were so recognizable that I was struck by the realistic portrayal. Here is a woman whose power and influence, and progeny, shaped a civilization, and she looks like someone you might see walking down the street today. She could be mistaken for Beyoncé’s mother. That the bust dates back to 1345 B.C. adds another dimension to the feeling of timelessness one gets when gazing into those black eyes.

The cuneiform tablets in the next room accentuate the light-headedness that such mental space-time travel provokes. They date even further back, to the 6th century B.C., the time of Gilgamesh and the first urban centers of civilization. The wedges in these stones were chiseled over 7,000 years ago. One feels humbled when contemplating such a dateline. It is no doubt some of the oldest writing most of us will ever see. A visit to the exhibition is worth it just for this.

Also in the room is one of the most famous discoveries from the Simon excavations, the one that unveiled the ancient city of Babylon. Against the wall are two lions made of glazed bricks, one a replica and the other a restoration made from thousands of original glazed brick fragments found at the excavation site. It is one of several hundred lions that decorated the processional way heading to the great Ishtar Gate, the gigantic entrance to the ancient fortress of Babylon.

Less famous but no less informative are the acquisitions from expeditions Simon financed that followed the path of the famous Silk Road. They are contained in a room separating the ancient world from Europe, and walking through this room is to be reminded of how Europe’s business acumen and the lust for riches paved the way for its cultural curiosity, a healthy human trait that nonetheless encouraged the pillaging of other cultures’ artistic heritage. All of Europe took part in this “relocation” of art. James Simon just happened to be especially good at it; so good that he almost single-handedly brought Berlin up to the measure of Paris and London through his large donations to the city’s museums.

In fact, this rather unassuming exhibition in San Francisco is a strong enticement to visit Berlin, where a huge replica of a portion of the Ishtar Gate, as well as the more famous Nefertiti bust, awaits us. For those aesthetes of ancient civilizations who will never get to Berlin, one lone lion and Queen Tiye will have to suffice.

James Simon may have been one of Berlin’s greatest benefactors, but he was also a German Jew, and during the Nazi Occupation, the memory of Simon’s legacy was erased from public record. It was not so long ago that his name was resurrected when an auctioneer rediscovered him by accident. And now, Berlin is finally paying him the respect he is due. The State Museums of Berlin will have a new James Simon Gallery by 2012, which will be the central fixture of what will become the largest museum complex in the world. It’s a fitting exhumation of someone whose own life was dedicated to exhuming the cultural heritage of other lives, other times.