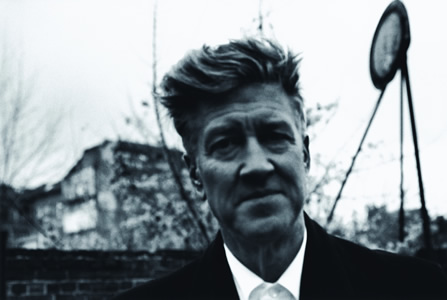 You know what to expect with David Lynch. The Air is on Fire is the first significant exhibition of his visual art, certainly the most comprehensive. The entire Fondation Cartier in Montparnasse has been given over to a display painting, drawing, photography, sculpture, and interior design by David Lynch, with a small cine-theatre in the lower level showing his experimental short films in a continuous loop.

The first thing that hits you though is the sound. As a film artist Lynch has consistently affirmed the power and presence of the aural. More than an underscore, more than a narrative aid, sound and music are active, living forces in Lynch’s films, shaping and reshaping the experience with, against, and parallel with the image. It is just so at the Fondation Cartier, where passing through Jean Nouvel’s great steel and glass wall immerses you in a typically Lynchian soundscape, resounding with seemingly arbitrary portent: clanking, thumping, low-frequency throbbing, footsteps, industrial sounds. As part of the exhibition there are a number of so-called ‘Trigger Points’ at which you, the visitor, may press a small red button to activate even more noises, and send some new aural element clanking and clunking its way around the building.

The constant soundtrack is entirely appropriate to the complete David Lynch experience, which is otherwise primarily visual. Though the large scale paintings which dominate the Ground Floor to the left on entry are of the Jackson Pollock/Francis Bacon/Lucien Freud variety and thus beg touch to appreciate their texture, such a thing is, of course, entirely interdit. Yet Lynch’s incorporation of objects and thick application of paints to grotesque subjects such as Do You Want to Know What I Really Think? (2003, 152.4 x 296 cm) featuring an open shirted, bespectacled male figure wearing actual jeans and a belt wielding an actual flicknife aimed at a partially disrobed female figure with the partial texture of a melted doll seating on a photo-realistic couch, or the similarly styled Well… I Can Dream, Can’t I? (2004, 152.4 x 296 cm) featuring a recumbent female figure whose mouth and face mirror her open vagina (with eyeholes to the left of the vaginal opening) and with real purple panties suspended half way down one leg, invite you to reach toward them, as if touching them might help to make sense of their being. These paintings are also arranged in a kind of spiral, inviting but not confining the visitor to skirt the fringes then delve into the eye of the storm, where you will find the daunting Rock with Seven Eyes, 1996 (127 x 152.5 cm) staring through glass eyes embedded in black paint at Bob finds Himself in a World for which He has No Understanding (2000, 168 x 168 cm X 2) with its nightmare of twigs and doll parts.

The sketches in the space to the right of entry on the Ground Floor are very different. Safely ensconced behind glass are napkins, hotel notepads, corporate stationery, note pads – anything really that seemed to be on hand at the time, including, in one case, the cover page of the script for Blue Velvet, on which Lynch has created various doodles throughout his life. The material here stretches back to his student days, much of it resonant with twentieth century painting, particularly Mondrian, Kandinsky, a touch of Escher, the inevitable Picasso (or possibly Cocteau), but most of it really just playful scribbling, half-realised reflections of the mental patterns forming in his head as he works on scripts for films or, presumably, carries on conversations with friends and family by telephone. There’s even a snatch of one panel from The Angriest Dog in the World (1983-1992), Lynch’s all-too short-lived comic strip. It is a treat to see all of this, and testament to his obsessive personality that he seems to have thrown nothing out, no matter how seemingly trivial. It is typical of how Lynch constructs his cinematic world, sending you scrabbling to the corners looking at details, knowing he put them there on purpose, but not necessarily for a reason. Their inclusion also testifies to the comprehensiveness of the exhibition, its reach across time and media to give a powerful and concrete sense of the artist that sometimes his films, by their nature as an aesthetic experience, are ephemeral, often flitting away before a solid response is properly generated.

There is a tactile, agreeably solid feel to all of the work here, and it is nice to be able to experience each element at a pace set by you rather than Lynch and his editors. A special treat is the marvelous little room constructed in the Small Gallery on the Lower Level from a Lynch drawing. For those eager to actually step into Lynch’s world, here is your chance: a kind of Alice in Wonderland dimensional cheat which has you move through one doorway and out another past actual furniture on a Lynch-designed multiple-patterned carpet. You’re not quite the bunnies in Inland Empire, but with the ever-present soundtrack to set the mood, you pass through this living sketch into an exhibition simulacrum of a Lynchian space, and, as with much of the exhibition, you can’t help but smile.

This was probably the thing that struck me most about this exhibition – the reactions of those attending. Most people, including elderly Parisian ladies, were smiling. No one was running away in terror, no one was screaming their objection. The paintings, drawings, and especially the photographs, are tremendously disturbing. Almost all of the large scale art works are both violent and sexual and frequently both. His collection of vintage erotica photoshopped into a digital pornography of mutation and dismemberment under the umbrella title Distorted Nudes are the kinds of things you would imagine you might find decorating serial killers’ rec rooms. The pervasive sense of sinister gloom radiating from several of the regular black and white photographs (hotel bedrooms, broken windows, bits of equipment and technology, abandoned and forgotten corners of nowhere spaces) and the almost oppressively dark series of paintings primarily in blacks and greys (Billy Finds a Book of Riddles Right in His Own Backyard, 1992 168 x 168 cm depicting a triangular stick figure scratched into a black landscape revealing the board underneath, Suddenly My House Became a Tree of Sores, 1990, 168 x 168 cm featuring a dimly seen house swathed in a muddy brown and grey skyscape with a distorted tree/figure in the foreground) suggest not so much an art exhibition as a cry for help.

And yet everyone, especially the clearly enthusiastic student helpers wearing the de rigeur exhibition t-shirts, is smiling – amused, titillated, tickled by the ironies, getting the joke. Again, you know what to expect when you go in, and you get it. All of the darkness in David Lynch comes with the classic surrealist kick in the pants that is the sense of humour: that knowing acknowledgment of both the absurdity of the world and the evident, driving necessity to represent and address it. The Air is on Fire is full of this kind of internally self-referring black comedy, and this too shows Lynch’s kinship with many of the artists whose names leap to mind as fellow travellers on the surrealist road to social and political deconstruction.

Notably absent are some of Lynch’s commercial, plastic arts, like the Fish and Chicken Kits; though you can buy the David Lynch Expresso Kit in the giftshop, along with an amusingly overpriced limited hardback edition of his collection of Snowmen photographs. There are one or two sculptures dotted around, women’s shoes with modifications and extensions sitting on podiums. These seem more decorative than anything else in the exhibition though, and may well really only represent spatial punctuation in the overall work of psychic sculpture that is the exhibition itself, which is marvelously presented throughout the building. The exhibition catalogue is expensive and heavy, weighing in at about 2 kilos and $70, but well worth it, featuring not only everything on display, but collected images from the feature films and an interview with Lynch and Kristine McKenna recorded in LA in 2006. There is also a DVD of a concert with Marek Zebrowski held at the opening of the exhibition, and this plays constantly in the giftshop, which becomes the final stinger in the exhibition, a collision between the performative and the commercial as you select your t-shirt and return to a much more drab exterior world. Mind you, you’re still in Paris.