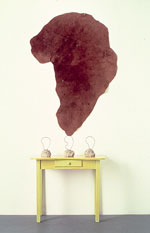 David Ireland displays his influences on his creative sleeve, like a long-experienced sergeant sporting multiple chevrons. He pays tribute to Marcel Duchamp (1887-1968), the originator of the Found Object as art. Ireland’s Duchamp’s Tree is a collection of split logs with his initials branded into the ends, mounted on a steel bottle rack; it’s a direct homage to the granddaddy of conceptual art.

Any number of other works in this, the first ever (and overdue) retrospective of Ireland’s work, are direct Duchamp descendents. Ireland seems incapable of throwing anything away. A three-legged chair found in the home he bought in San Francisco’s Mission District is mounted on a pedestal and enhanced with a small loose-leaf journal, attached with a chain. Was the journal found that way, with the chair? Or, more likely, was the juxtaposition the creative fillip of the artist? (Does it really matter which way it came about?) The total image stimulates the viewer to respond to the ambiguities of the combined elements, infused with a mild sense of mystery. It’s the very spirit of Dada: playful, intuitive, accidental, a sculptural free association.

Yves Klein (1928-1962), whose artistic heyday was during the 1950’s, is another in the line of conceptual artists who explored the very nature of what art is about and expanded the range of artistic expression. Klein created what has come to be known as "International Klein Blue," an intense ultramarine color that became his trademark. Ireland’s Cake Dome Vitrine uses Klein blue to color an amorphous mass made of Fixall, a cement-like substance. Displaying the blue mound in a household cake dome generates (with remarkable simplicity and economy of means) the tension of multiple contradictions–the ordinary containing the strange; the known contrasted with the mysterious, the light and transparent holding the weighty and opaque, the pristine display of the vaguely scatological. Another work in Klein-blue Fixall, called Y.K.’s Corner, is an elongated blob mounted high in the corner of a gallery. (Tom Friedman has used the same technique–mounting high in a corner, forcing a change of perspective–except Friedman mounted a tuft of hair.)

Other artists in the lineage of minimalism and conceptualism have been important to Ireland’s thinking, if not directly alluded to in his work. Sol Lewitt, an articulator of the theoretical underpinnings of conceptualism–the centrality of the idea to the work of art, the separation of the artist from the object, the negation of the importance of the object–certainly paved the way for artists like Ireland.

In a less theoretical vein, Ireland is an admirer of Van Gogh, some of whose powerful colors find their way into Ireland’s more often monotonic palette. A piece called Three Attempts to Understand Van Gogh’s Ear in Terms of the Map of Africajuxtaposes an actual elephant’s ear (the shape of which is remarkably similar to the outline of the continent) with three variations on the ear-like shape made from wire and anchored in globs of concrete which are neatly arranged on a simple table, painted in a bright, Van Gogh yellow. Making literal sense of this assemblage isn’t the point, but the way it puzzles and challenges is surely intended; there’s a sly wit at work here.

While Ireland’s work fits squarely in the conceptual tradition, he brings to it his own unique set of experiences and interests as well as a paradoxical combination of modesty and showmanship. His years in Africa, his Victorian residence, his fascination with Zen Buddhism–all come into play as he explores the nature of artistic expression and communication. Ireland’s "dumbballs" are simple spheres of concrete that are made by tossing a wet lump of concrete back and forth between the hands until the material dries into its natural form. If the resulting product is of unremarkable appearance, the process, which takes a startling twelve hours, is pure Zen — in-the-moment, meditative. He enshrines a dozen and a half of these in a handsome, lit display case (Dumbball Box), giving the humble material the dignity of Tiffany jewels. Or he randomly scatters them in an installation (79 Dumbballs with Carriers) as a tribute to John Cage, another Zen adherent.

The imaginative range of Ireland’s techniques is another reflection of his exploration of expressive processes. Handsome monotypes from the 1970’s show his experimentation with the lithographic press and the influence of his mentor, Nathan Oliveira, as well as the multi-paneled works of Brice Marden. Ireland put the paper through the press folded and crushed in various ways, producing a richness of texture in otherwise carefully understated blocks of subdued color.

In complete contrast with the unassertive modesty of some of his work, Ireland explodes into unabashed theatricality and uninhibited scale in the 1996 Angel-Go-Round, an installation in which a gray fiberglass angel, motorized and suspended on a cable from the ceiling, circles continuously over a mass of concrete statuary (nymphs, maidens, Michelangelo’s David) laid out flat on the floor (seemingly randomly, but forming a perfect circle) like so much cultural debris. As with the best of Ireland’s work, it intrigues, it teases, and it suggests a plethora of interpretative possibilities, virtually coercing the viewer into considering its technique, its purpose, and its artful ambiguities.