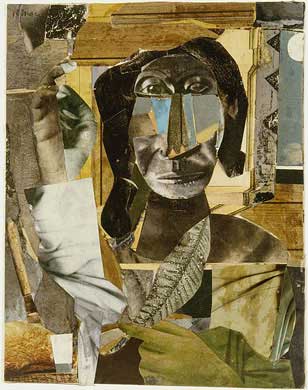 Romare Bearden (1911-1988), a leading African-American artist of the mid-20th century, showed in his early work a wide diversity of styles and influences as he searched for his own voice, a voice that, regardless of its particular forms of expression, was consistent in expressing his ethnic roots in the South, Harlem, and the West Indies.

A broad retrospective exhibition, organized by the National Gallery in Washington, DC, includes 140 works in a wide variety of media including oil paintings, watercolors, photomontages and, Bearden&#146;s greatest achievements, collages. Some 70% of the exhibit consists of works borrowed from private collections, providing a rare opportunity to see Bearden works not normally available to the public.

Bearden studied under George Grosz at the Art Students League in New York where he was exposed both to the techniques of old master European painters and to his German instructor’s own Dadaist and social/political interests.

Bearden’s early works, before his career was interrupted by service in World War II, are represented by a series of large gouaches, paintings with a religious subtext, conveyed in images of African-American figures, partially abstracted but clearly recognizable. The influence of the Mexican muralists is palpable. If otherwise unremarkable, these paintings do establish Bearden as a strong colorist.

After the war, Bearden continued seeking his own voice, always keenly observing other modernists. His Madonna and Child (1945) is a direct reference to Picasso as is Now the Dove and Leopard Wrestle (1946).The subject matter of the latter is drawn from a Lorca poem, but both its energetic semi-abstract style and its content are also heavily Picasso influenced. Other Bearden works draw on Miro and Matisse.

But it is one of his early collages, Harlequin, in which Bearden’s vision, while still keeping an eye on Picasso, starts to evolve into something unique. In Harlequin, the artist achieves his cubist fragmentation of the commedia subject by constructing it out of various papers and adding paint and ink, the whole coming together in a warm medley of oranges, pinks and deep reds. There’s a freedom and energy in his use of collage here that retains its freshness.

While many 20th century artists worked with collage, Bearden went on to develop a highly personal style and worked on a scale rarely seen in the medium. His 1964 Conjur Woman (left) was an early iterationof a series that continued for many years, reflecting Bearden’s interest in Black Haitian ritual. Powerfully composed and in a limited palette, the central face once again projects a Cubist flavor, which in turn was based on African masks.

Made in the same year, Evening Meal of Prophet Peterson brilliantly juxtaposes a variety of magazine picture cutouts in a scene rich with detail of both the domestic interior and the figures of Peterson and (presumably) his wife, the latter’s face built up of three separate images, including, mysteriously, a smiling Caucasian child. For all the complex multiplicity of shapes and textures here, the arrangement is brought together into a strong composition. As he continued to cultivate his collage technique, the size of the works grew; Tomorrow I May Be Far Away (left), which draws on his North Carolina memories, measures nearly four by six feet. Contrasted with earlier works, this collage is broken into relatively more pieces, resulting is a dense, quilt-like texture. It retains a strength of composition with the pensive central figure functioning as a fulcrum for the energized patterning swirling around it.

The growing size of Bearden’s canvas climaxes in the seven-panel mural-sized (10 by 16 feet) Berkeley–The City and Its People, a commissioned work from 1973 which hung in the city’s council chambers. A departure from his usual subject matter, this pieces impresses with its sheer size and virtuosity of technique, but it lacks the resonance of works drawn from his own experience and the sheer size of it seems to drain away its energy.In many smaller (but still large) later works, such as Captivity and Resistance (1976), he simplified, placing his cutouts on broad swaths of unbroken background which has the effect of devitalizing the impact of those works, too. Sometimes, on the other extreme, such as the small Madeline Jones’ Wonderful Garden, his collages are so richly textured as to surfeit the eye, without a sufficiently strong focus to unify the visual experience.

Still, Bearden is never less than interesting, especially in the expression of his cultural heritage, all too widely ignored elsewhere. From the rural south to big city jazz to voodoo spiritualism, he consistently incorporated the images and themes central to his experience into a lifetime of work, achieving a unique brilliance in the best of his collages.

(18810)
$6.99 (as of January 25, 2021 - More infoProduct prices and availability are accurate as of the date/time indicated and are subject to change. Any price and availability information displayed on [relevant Amazon Site(s), as applicable] at the time of purchase will apply to the purchase of this product.)

(8037)
$9.49 (as of January 25, 2021 - More infoProduct prices and availability are accurate as of the date/time indicated and are subject to change. Any price and availability information displayed on [relevant Amazon Site(s), as applicable] at the time of purchase will apply to the purchase of this product.)

(4469)
$8.98 (as of January 25, 2021 - More infoProduct prices and availability are accurate as of the date/time indicated and are subject to change. Any price and availability information displayed on [relevant Amazon Site(s), as applicable] at the time of purchase will apply to the purchase of this product.)
related posts