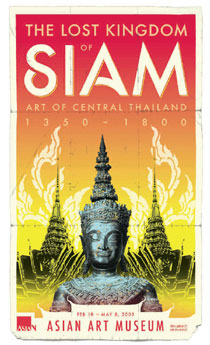 The Sage Vidhura carried through the air holding the tail of a demon&#146;s flying horse; a scene from one of the last ten previous lives of the Buddha (detail), approx. 1700&#150; 1750. Pigments on cloth. Asian Art Museum of San Francisco

The Kingdom of Siam, which was based in Ayutthaya for more than four centuries, is so little known to the lay Westerner that it takes on an instant aura of romantic exoticism. In this first exhibit of classical Thai art in the United States in over three decades there is nothing to disabuse the visitor of that impression. From a world that seems so very distant, both geographically and temporally, curators Forrest McGill and M. L. Pattareatorn Chirapravati have gathered 89 objects, drawn from collections in Thailand, Europe and the United States. It is a handsomely mounted exhibition of objects of exquisite workmanship and refined artistry.

As seems often to be the case with cultures from the past, what survives are the expressions of religion and the artifacts of the ruling class. The religion throughout the kingdom’s history was Buddhist and the exhibition has many Buddhist images, including the small, elegantly composed Seated Buddha (to the right) which was excavated from a crypt in 1956 and is typical of the early period.

The western year 1458 was the year 2000 in the Buddhist calendar, accompanied by all the misgivings and worries witnessed recently with our own Gregorian year 2000. There was a resolve in Siam to record the previous lives of Buddha so that they would not be lost in the uncertainties of the millennium. Many works were devoted to retelling the lives of Buddha (the stories called jakatas), including several bronze crowned heads in the exhibit. The jakatas remained a constant source of material for Siamese artists over the centuries, in painting and in manuscripts as well as in sculpture. These images often have a somewhat naive, almost cartoonish quality to the Western eye, but that in no way detracts from their artistry. These works also seem to radiate a gentleness and a subtly wry humor, a combination of factors that seems uniquely Siamese.

Siam was a prosperous and cosmopolitan kingdom over its centuries and international trade was extensive. Within its borders were people of varied ethnicities–Chinese and Cambodian, for example, in addition to Thai. But artifacts from other parts of the world are here, too, testifying to the many trading partners of the Siamese: China, India, and the European countries as well. A sword has a Dutch steel blade, dated 1575. There are colorful, elaborately designed textiles that were made in India specifically for the Siamese market.

Although Buddhism was the dominant religion, the royalty of Siam didn’t hesitate to associate themselves with Hindu gods, gods who preceded the arrival of Buddhism. Thus the bronze image of Parvati (wife of Shiva) is very much in the Indian style–a posture markedly more relaxed than the typical Siamese sculptures of the period and distinctly sensuous.

The exhibit includes architectural fragments, cabinets, wood carvings, illuminated manuscripts, and jewelry, too. But it also points up that the kingdom was conquered and destroyed by the Burmese in the 18th century. The objects on view represent a gleaning from exceedingly rare surviving artifacts of the period. As a result little is known of the texture of the day-to-day lives of the people of the Siamese kingdom. There is a poignancy to seeing these remnants, as beautiful and intriguing as they are, without access to a more fully realized human context in which to place them.