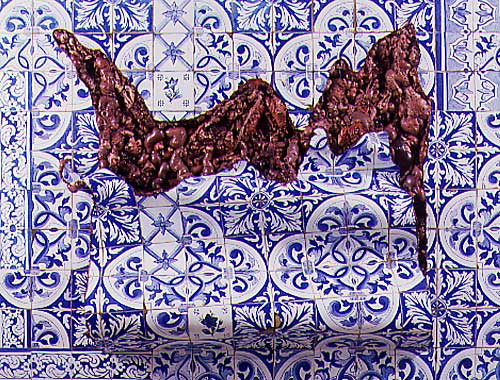 "Baroque," to those of us with just enough education, calls to mind the sculptor Bernini and the painters Caravaggio, Rubens, and Vel�zquez–17th century artists who portrayed high drama in complex compositions full of movement, emotion, and tension. In Latin countries, where the church was the single strongest institution and the people deeply religious, the style of the Baroque took on an added level of exaggeration. It was also the style linked to the period of the colonization of Latin America where cross-cultural influences included not only the Spanish and Portuguese colonizers and indigenous peoples, but also input from African and Asian immigrants and trade.

Somewhere along the way there, the descriptive term "baroque," with reference to Latin American art, reverted to its earlier meaning of overwrought or florid and took on a disparaging tone. Ultrabaroque, an exhibit of contemporary Latin American art now touring North America, attempts to reappropriate the word as a positive–as an umbrella term to cover wildly diverse styles from the Latin regions that don’t necessarily follow in the tradition, but surely draw on it as a cultural underpinning, reinterpreted by a young generation of post-modernists.

In some of this work, there is a direct and deliberate play between traditional, religious-based art or artifacts and a sophisticated contemporary viewpoint. Einar and Jamex de la Torre, brothers born in Mexico and working now both in Mexico and in California, use blown glass and a wide variety of other materials in their assemblages which draw directly on images from popular culture and religious iconography, such as the crucifix. But Jamex’s crucifix, Serpents and Ladders, superimposes images based on a children’s game and has a bird nesting on the top of the cross and a pile of empty tequila bottles at its base. Their art is rooted in the kitsch of the local gift shop combined with images from contemporary life, all transformed by an ironic twist..

Rochelle Costi, a Brazilian, offers a series of large color photographs, all of bedrooms in and around S�o Paulo, ranging from a street person’s flimsy shelter to a fabric draped fantasy. The approach here is cool and reportorial, perhaps too much so to sustain interest.

More intriguing is another work, I�igo Manglano-Ovalle’s Paternity Test, which consists of 30 panels, each a digitally produced blowup of the DNA analysis of a member of the board of trustees of the San Diego Museum of Contemporary Art, which commissioned the work. Visually, it is a handsome, glossy, color-field abstraction, but conceptually it is a group portrait–a direct descendant of Rembrandt’s Staalmeesters–with a scientific overlay in the uniqueness of each individual’s DNA. Questioned as to whether a viewer would get that message from the art itself (as surely the Rembrandt speaks for itself) or would it really be necessary to have the "setup" information to know the intent, articulate curator Victor Zamudio-Taylor defends the former position suggesting that we know how to "read" the Rembrandt from centuries of cultural experience; in time Paternity Test will find its message directly understood as well.

Perhaps. But is it DNA individuality that makes people interesting? Or is it the acquired characteristics of human experience–which Rembrandt captures so perceptively in his characterful faces–that give portraiture its real fascination? To this viewer, Paternity Test ends up being a conceptual conceit–with an interesting point to make–but not a "portrait" in any meaningful sense. And that may be just the point the artist wishes to make.

Less literal is a massive eruption of a wall sculpture by Nuno Ramos which is made up of mirror, fabrics, plastic, glass, metal and paint mounted on wood. Pipes crisscross at odd angles; colors–reds, greens, yellows, lead the eye through this enormous assemblage. It’s an energetic and energizing visual experience–essence of baroque in the modern vernacular.

Adriana Varej�ostarts with a piece of linoleum that has a pattern of Portuguese blue and white tiles, then peels back a section of the tiles to reveal organic innards with a vague look of intestines, creating a clear historical reference and powerful drama. Ruben Ortiz Torres indulges in bilingual puns and appropriates popular cultural icons–he morphs Bart Simpson into a cubist Bart S�nchez, commenting on the erosion of cultural borders and the pervasiveness of television imagery. Meyer Vaisman does a series of works based on medieval tapestries, with their lush colors, floral details, and elegant figures, on which he paints a Disney-esque Mother Goose and Jiminy Cricket. Lia Menna Barreto creates a series of assemblages in which she irons and melts plastic dolls, flowers, leaves and such onto large swaths of silk, a sheer fabric that allows layers to be seen. These are at once beautiful and strange, surrealistic bouqets with an undercurrent of decay.

Ultrabaroqueat once trumpets the excitement and energy of contemporary art in Latin America and demonstrates both its international, multi-cultural nature and its acute awareness of its own predecessors. The variety of media and techniques and the disparity of styles and viewpoints highlights the enormous creative vitality bubbling up south of the (eroded) border.