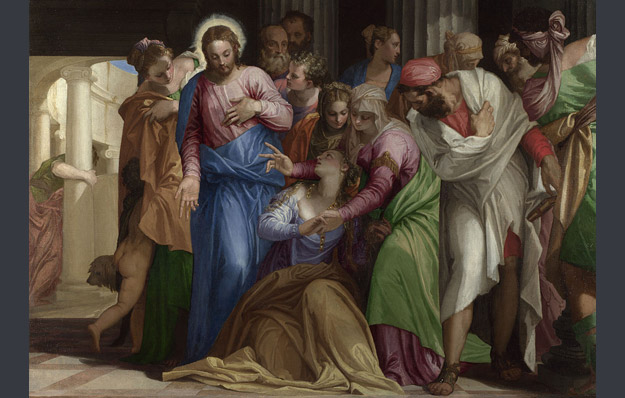 For several weeks now, the National Gallery has been a hive of activity as preparations were made for this new show — the first ever in the UK — on the great Venetian painter Paolo Veronese. Rooms have been closed, temporary screens erected, and world-famous paintings — including two Michelangelos! — have been relegated to the nether regions, in order to clear space in the permanent galleries. There hasn’t been disruption on this scale since 2006, when the entire 19th-century collection was moved out for the Velasquez exhibition. Expectations, then, are understandably high for this show on the artist who, together with Titian and Tintoretto, dominated the art of sixteenth-century Venice.

Practical as well as aesthetic considerations, curator Xavier Salomon explains, have mercifully ruled out the gallery’s usual exhibition space, the dungeon-like basement of the Sainsbury Wing. Many of Veronese’s works are so vast — the “Martyrdom of St George” from Verona, for example, is over 14 feet high — that they will only fit in the main galleries. The “St George” altarpiece is one of no less than 40 spectacular loans that the gallery has been able to add to its own 10 Veroneses for this show. Others include the Louvre’s “Supper at Emmaus,” never previously loaned, and another huge altarpiece, “The Mystic Marriage of Saint Catherine,” which leaves Venice for the first time since it was painted in the 1560s.

With so many great paintings on display, one can easily appreciate the qualities that earned Veronese such renown in his lifetime. These can be summed up in one word: opulence. Everywhere you look, extravagantly dressed, aristocratic figures swagger around in grand architectural settings, as if they were taking part in a series of lavishly staged theatrics. He developed a distinctive feminine type — blond, regular-featured, statuesque — that he applied to Madonnas and courtesans alike. As the art critic Marco Boschini wrote in 1660, “there certainly never has been seen among painters such regal pomp and circumstance, such majestic actions, such weighty and decorous manner!” In 1573, famously, Veronese’s taste for the dramatic got him into trouble with the Inquisition, which wanted to know what place “buffoons, drunken Germans and dwarves” had in a painting of the “Last Supper” (not exhibited here). To which Veronese replied briefly, “We painters use the same license as poets and madmen.”

The exhibition is organized chronologically, starting with Veronese’s origins in Verona, his move to Venice in the 1550s, and ending with his last documented altarpiece, “The Conversion of Saint Pantalon” (1587), from Vicenza. Religious paintings predominate, but there are portraits, too (although Veronese is really no match for Titian in this genre), and mythological works. The most satisfying room in the show, in my opinion, is one of smaller ones, where the National Gallery’s own very mysterious “Four Allegories of Love” are hung under one of the gallery’s cupolas, alongside “Mars and Venus United by Love” from the Metropolitan Museum in New York and, in a nearby vitrine, a quirky variant on the same theme from Turin.

To experience Veronese at his best, there’s really no substitute for a pilgrimage to see his decorations at San Sebastiano in Venice (where he’s also buried) or his frescoes at the Villa Barbaro at Maser. Short of a trip to Italy, though, this show is as good as it gets. Veronese is not an intellectual painter, but when it comes to beguiling the eye, he takes some beating. His handling of color is always superb: ravishing pinks, silvery greys, brilliant blues, set off by deep Venetian reds, ochers, and other contrasting earth tones. By chance, this show will be running at the same time as Tate Modern’s exhibition of Matisse cut-outs, which opens on April 17, 2014; it will be fascinating to compare the work of these two masters of color.