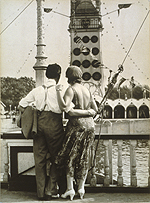 When this Walker Evans retrospective was at The Metropolitan Museum of Art (the organizing institution for the exhibition), attendance records were broken. That’s a testament both to the greatness of this photographer’s work and to its accessibility.

In a delightful essay about the exhibit in The New Yorker issue of March 13, Anthony Lane catalogues (tongue-in-cheek) the areas of expertise one might need to fully appreciate Evans’ life work – everything from the early technology of the Kodak folding camera to Greek Revival architecture to the use of typography in modern painting. But, as Lane wisely concludes, none of that is necessary – just go and see these dazzling pictures. As with all great art, they speak for themselves and communicate both the social documentary aspects of Evans’ work and the artist’s attitude toward what he shows us. And it is consistently achieved with superb composition, the play of light and dark, and all the special elements that a camera can bring to the creation of an image. Those aspects of Evans’ artistry don’t announce themselves from the prints – they were his tools, they’re there in every picture, but technique doesn’t take over the presentation. On the contrary, it seems distinctly subordinated. Still, after you’ve walked through a room or two of this work, there is a cumulative aesthetic impact: you are in the presence of a great master.

The gift of a big retrospective like this one is, of course, to be able to see the broad sweep on an artist’s work over a long career – in Evans’ case half a century from the 1920s into the 1970s, during which he documented what he saw in American society, both urban and rural. An early commission (1933) was to photograph the working people of Havana under a dictatorial regime for Carleton Beals’ book The Crime of Cuba. The content of the pictures is unmistakably political, but Evans doesn’t preach. He lets the images tell the tale. "Coal Dock Workers" captures a world of grinding labor and poverty in the head-on portraits of three grizzled workers with their shovels, a fourth in the background, anonymously decapitated by the frame of the photo. That latter figure is from a modernist aesthetic; at the same time, the overall arrangement of four figures in a diamond-shaped pattern evokes a classical composition.

Later, of course, Evans collaborated with James Agee for Let Us Now Praise Famous Men, producing eloquent photos of the face of poverty in rural Alabama, centered on the Floyd Burroughs family, perhaps Evans’ best known work. But the body of his work spans so much more: people in the New York subways, southern architecture, signage, portraits, interiors, and the later work for Time and Fortune magazines. Evans’ is also distinguished for being the first photographer to have a one-man show at New York’s Museum of Modern Art (American Photographs, 1938); the catalogue from that show is now a classic.

The current exhibit as presented in San Francisco is enhanced by a selection from SFMOMA’s own collections, showing influences on Evans’ work. One learns of the contempt in which Evans held the work of Edward Steichen, which he saw as ostentatious and commercialized. He admired the technique of Steiglitz, "the patriarch of art photography," but where Steiglitz was a romantic, Evans stripped away any trace of the sentimental in his work in a cool, more existential approach – a sort of "anti-Steiglitz." This viewer would prefer to think of it as simply "pro-Evans."