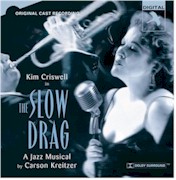 Kim Criswell is an experienced Broadway performer who relocated to London some years ago. Her US appearances included Nine (taking over as Claudia), Baby and eighteen months as LA’s first Grizabella. Her first West End appearance was as Annie Oakley – for which she received an Olivier nomination – and she subsequently appeared in Elegies for Angels, Punks and Raging Queens and Dames at Sea. Criswell has made a number of show recordings for both EMI (including Annie Get Your Gun and Anything Goes) and JAY/TER. Her Adelaide, in their recording of Guys and Dolls, is the equal of any on record.

In the last few years Criswell has appeared to great acclaim in concert and cabaret throughout Europe and the US. The foundation of this success is her extraordinarily versatile voice which ranges from Mermanesque belt to crystal soprano with equal facility. She is also at home in a variety of styles, from popular operetta via Broadway standards to the blues, and seems as comfortable singing with symphony orchestras as she does when accompanied only by the piano of her regular musical partner, Wayne Marshall.

Back to Before features Criswell in a program of mostly familiar numbers from the last thirty years of Broadway and West End musicals. With few exceptions, these songs have been recorded many times before but Criswell is able to find something new in most of her material. Very much an actress as well as a singer, she offers up a distinctly different character for each piece. While many singers succeed – and occasionally fail disastrously – by imposing their particular manner on a song, Criswell is able to adapt her vocal and performing style to suit each one.

She is at her most effective in the more "classic" numbers. Broadway Baby is impressively unaffected and she holds back the power until the very last notes, rendering the climax even more effective. Don’t Rain on My Parade is sung with abandon, her chest notes gorgeously resonant on "I’ll march my band out…" and the final glorious "parade" held to the point where the listener begins to fear for her lungs. The most successful item is also, perhaps, the least known. Irving Berlin’s Mr. Monotony didn’t make it to the Great White Way until Jerome Robbins’ Broadway in 1989 – forty years after it was dropped from Miss Liberty. Criswell’s scorching performance and Don Walker’s thrilling orchestration serve to make this omission seem even more incredible.

Of the more recent material, it is interesting to have Rainbow High as an alternative to some of Evita‘s more frequently recorded numbers. Here the voice takes on a steely edge and the interpretation is appropriately unrelenting. Criswell offers what must be one of the first recordings (apart from the original casts’) of the soaring Back To Before from Ragtime and finds all of Mother’s potent mixture of strength, courage and slightly anxious anticipation as she looks towards an exciting but uncertain future. She closes the disc with a number that frequently acts as her concert encore, a version of Annie’s Tomorrow which thrills like no other and serves the song up afresh.

Some of the material is just a little too familiar. Even a singer of Criswell’s caliber is unable to add much to I Don’t Know How To Love Him or On My Own and her interpretation of Memory, though heartfelt, offers little that we haven’t heard before. Overall, however, the album is a fine representation of one of the most delightfully versatile interpreters of Broadway material working today.

The Slow Drag offers another side of Criswell’s talents. It is the original cast album, with additional tracks, of a 1997 show which premiered at London’s tiny Freedom theater and transferred to the Whitehall later that year. The show was a fictionalized account of the life of jazz musician

Billy Tipton who, upon his death in 1989, was discovered to have been a woman. Criswell starred as the character’s wife, with the splendidly unlikely name of June Wedding, and delivered the bulk of the show’s numbers which included familiar standards such as More Than You Know, Why Don’t You Do Right and Blues In The Night, the latter receiving a particularly intense, down an’ dirty performance as the singer alternately croons, growls and belts her way through the lyric. The added numbers include a touching My Foolish Heart, a thrillingly brash You Came A Long Way From St. Louis and a witty duet with the show’s ‘male’ star, Liza Sadovy, on Baby It’s Cold Outside. As an album, The Slow Drag probably lacks the broad appeal of Back To Before but Criswell is in fine form throughout and, while she can’t challenge the great interpreters of jazz and blues, her versions are highly enjoyable and all the more impressive for being delivered by a white, theatrically trained singer.

Sadly, Criswell’s fine solo debut, The Lorelei, on which she and John McGlinn offer loving recreations of 30’s and 40’s Broadway material in original arrangements, is no longer available. Seek it out in the second-hand stores and also check out the 1993 cast recording of the aforementioned Elegieswhich contains her definitive reading of the show’s finest song, the achingly sad little ballad My Brother Lived In San Francisco. While this number is slowly creeping into the repertoire of a few cabaret singers it remains surprisingly little known and is unlikely to find a finer or more touchingly direct interpretation than this. – Mark Jennett