In Bed With Gore Vidal: Hustlers, Hollywood, and the Private World of an American Master 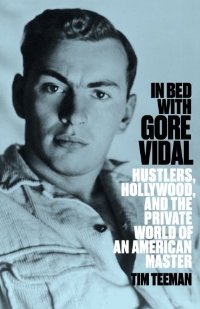 The Times of London correspondent Tim Teeman knew Gore Vidal as the aging literary lion in winter, a brilliant novelist of “Burr” and “The City and the Pillar,” living in semi-exile and harboring lifelong resentments. Teeman’s respect for Vidal emerges in his otherwise steamy exposé, “In Bed With Gore Vidal.”

The book is a seemingly endless speculation about what Gore did sexually, with stories of sex parties, hustler bars and grinding before Grindr.com. What would the author of “Myra Breckinridge” have thought of such a raunchy bio. The eminently mercurial Vidal would not only hate it, he would have been capable of writing it if it was about someone else. Actually, Teeman poses an interesting literary equation, since Vidal reveled in puncturing images of everyone from the hypocritical politicians, Hollywood stars and literary rivals. Indeed, the more sensational aspects of the book are uncorroborated tales of lusty exploits, some of which strike as reliable as anything on Page 6 of the New York Post.

What saves it from complete literary debauchery is that Teeman genuinely tries to piece together, if unconventionally, Vidal’s emotional life and, between hook-ups, gives a believable portrait of his intractable nature.

For the book, Teeman relies on his interviews with Vidal’s half-sister Nina Straight and his nephew Burr Steers, as well as many of Vidal’s celebrated friends from Claire Bloom and Susan Sarandon to just as reliable associates as author John Rechy, a gay hustler whose scandalous book “City of Night” Vidal secretly admired and publicly resented.

Many were intimate friends of Vidal and his partner, Howard Austen (whom Teeman reports Vidal met at the fabled Everhard Baths in Manhattan). The couple had homes in Connecticut and famously, in Ravello, Italy, hosting Caligulesque orgies. Vidal went to great pains to obscure their true relationship, even though for all intents and purposes, they had a 53-year-old marriage. After Austen’s death in 2004, Vidal, by every account, fell apart at the seams. He often joked about them only having sex a few times in the beginning and not at all after that. Friends and intimates disagree about the true nature of their relationship.

Teeman writes incisively about the social shifts about gay life vis-à-vis the era that Vidal grew up in and the unhealthy attitudes for a gay man he retained throughout his life. Vidal’s squirrelly attitudes about everyone being bisexual and that there is no such thing as homosexuals, just homosexual behavior, were part of his steeled closet. Vidal’s relationships with the new generation of out gay writers, who wanted to connect with Vidal but often came away disillusioned, were troubled. Bruce Benderson put it bluntly, “OK, he believed in gay acts, not gay people, but part of the reason he developed that theory was because he was half in the closet himself. He didn’t want to be thought of as a miserable fag with nothing interesting to say.”

Teeman, redundantly, gets everyone in Vidal’s orbit to weigh in on this trope, and it is a lively discourse that reflects the generational arc of gay men before, during and after liberation. Vidal, obviously, played all sides of the street when it suited him. Vidal “handled” knowledge about his personal life as if it was a political press matter, even though he could be quite open in private and even salacious, when drinking, in public.

One of the most moving chapters concerns Hugh Steers, Burr’s brother. Steers, a painter, died of AIDS in 1995. He was gay and had beseeched Vidal to take a public campaigning stand. “He and Gore had been very close, but Gore didn’t do a lot during The AIDS crisis and Hugh called him on it.” Teeman observes the death of Hugh Steer as being profound for Vidal and showing his more guarded personal vulnerabilities. Its impact resonated for the rest of his life and echoed how open and close he was to Howard Austen in later years.

Vidal’s public feuds with Norman Mailer and William F. Buckley are revisited as they were levied against his private life. Vidal called Buckley a crypto-Nazi on national TV and Buckley called him a queer and threatened to sock him. Lawsuits ensued, but they eventually vaporized. Teeman quotes Burr Speers: “I know Buckley had a file on him that Gore feared. ‘The file,’ as he called it, was something he was afraid of. Buckley definitely had something over him. It would make sense if that material was about him having underage sex.” Steers contended that it might be true, because Vidal spent time in Bangkok. Again, it can still be considered a unsubstantiated bombshell.

The most intimate aspect of the book is Teeman’s moving and compassionate account of Vidal’s declining years after the death of Austen. The whole tenor of the work changes, it is done with such care. Those who are looking for a juicy gossip about Vidal will get their money’s worth with “In Bed With Gore Vidal.” But, taking the long way around, Teeman gets to Vidal’s genuine intimacies, and they have nothing to do with what he did in bed.