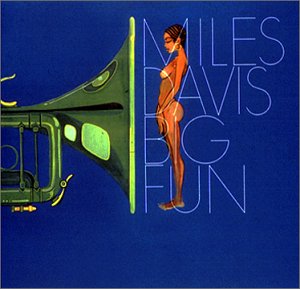 Big Fun is one of the forgotten items in Miles Davis’s discography. Recorded with four different bands (one for each of its album-side-long cuts), it falls somewhere between the expansive soundscapes of Bitches Brew and the chugging, anarchic funk-noise of On The Corner. As Miles’s early-70s works are re-evaluated, and found to be far from the negligible sellout moves they were branded at the time of their initial release, this album’s reappearance is welcome indeed.

All of Davis’s 1970s studio albums were hewn from long jam sessions, held on as little as 24 hours’ notice with anywhere from five to eleven musicians. Three of the sessions which spawned Big Fun&#146;s tracks were recorded in 1969, and one in 1972. (The reissue has been padded with four additional tracks from 1969, amounting to about 45 minutes of material, all of which is also available on the Bitches Brew 4-CD boxed set. Each of these tracks is moderately interesting, but none are as compelling as the original album cuts.)

Disc One begins with "Great Expectations," a funk vamp featuring a thick bassline from Harvey Brooks. Ron Carter also plays bass on the track, but it is Brooks’s Fender electric which sets the tone for the piece. As with almost all of Miles’s material from these years, solos emerge from an overall groove rather than a chord progression; the music does not rise and fall as jazz, nor does it beat the listener over the head with the obtrusive crescendos of rock. Instead, like the early work of George Clinton’s Funkadelic, it ambles along at its own pace, each set of sounds arising organically from, and receding back into, the whole. "Ife," the 22-minute cut which originally formed Side Two of the vinyl release, was recorded in 1972 and shows a marked aggressiveness, compared with the relatively mellow mood of the 1969-vintage "Great Expectations."

But it is not until "Go Ahead John," the first cut on Disc Two, that aggression becomes a prime factor in the music. Though it dates from 1969, this cut, recorded with only a quintet, is the most forward-looking of all the original four Big Fun pieces. It begins with another thick groove, this one played by bassist Dave Holland, over which Steve Grossman plays a pleasant, if not astonishing, saxophone solo. About seven minutes in, though, John McLaughlin takes his solo, and the results are like nothing heard in jazz (or jazz-rock fusion) before or since. Producer Teo Macero drops McLaughlin and drummer Jack DeJohnette in and out of the soundmix repeatedly, creating a disorienting whapping sound in the listener’s ear from the drums, and causing McLaughlin to produce what has to go into the musical history books as one of the ugliest guitar solos ever to see release on a major record label. His guitar, already distorted, begins to vibrate and resonate in the ear like a dentist’s drill switched rapidly on and off. What he’s playing is not revolutionary, but the use (in 1969) of dub-like production techniques most definitely is. After this, even Miles himself (who takes the next solo) seems somehow deficient, not bringing as much innovation or aggression to the table as his producer and his guitarist. Certainly after "Go Ahead John," the original album’s final cut, "Lonely Fire," superb though it is, can only serve as anticlimax.

Big Fun is being released in conjunction with Get Up With It and On The Corner, respectively one of Miles’s more beautiful albums (particularly "He Loved Him Madly," a memorial to Duke Ellington) and probably the most controversial in his entire career. All three of these albums are, along with the other recordings from the 1970s, some of the most probing, insistently creative music Miles Davis ever made, and it is gratifying that they are finally getting the treatment they deserve.