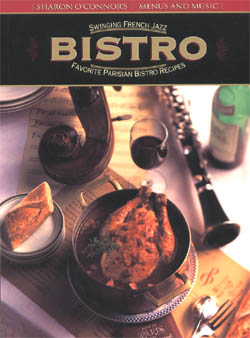 Sharon O&#146;Connor&#146;s Bistro is an ambitious and engaging cookbook that covers all the bases with enthusiasm, charm and an acknowledged passion for French bistro cooking.

O&#146;Connor tells of being &#147;hopelessly smitten&#148; with her subject matter, and proceeds to unfurl it with sixty-eight recipes by the chefs of seventeen Paris bistros and three more in Quebec, New York and the Napa Valley. The two American bistros – the smash-hit Balthazar in Manhattan&#146;s SoHo, and the more recent arrival, Bouchon, in Yountville – are so authentic they seem like transplants from France.

In an unusual innovation, O&#146;Connor provides mood music for the home cook who might need it in the form of a CD that accompanies the book. O&#146;Connor is a musician (founder of the San Francisco String Quartet) as well as a cookbook author, and has turned out eleven previous works in her menu-and-music series.

In addition, the book offers brightly written background material about French bistros. O&#146;Connor traces the bistro from its origin two centuries ago as a cafe-charbon (a place to buy coal or wood and stop for a snack and glass of wine) to its status today as a convivial neighborhood eatery with simple, satisfying home-style cooking, or &#147;cuisine grand-mere,&#148; as it&#146;s most often called. O&#146;Connor even explains the blurry difference between a bistro, brasserie and cafe.

Finally, the book becomes a delightful travel guide, with short but informative essays headed &#147;Neighborhood Walk,&#148; about the area surrounding each of the Paris bistros. There&#146;s a lot of rich history and local color in these essays, thanks to O&#146;Connor’s assiduous and thorough research.

The recipes represent house specialties of the different bistros. These include such venerable establishments as Chez Allard (Duck with New Turnips), Polidor (Lamb with White Beans) and Au Pied de Fouet (Chicken with Chive Cream Sauce). This being bistro cuisine, the dishes are largely uncomplicated and very traditional, such as steak pommes frites, cassoulet, tarte tatin, mousse au chocolat and creme caramel. Most can be made ahead, and some, like braised coq au vin and veal stew, taste better the day after they&#146;re made.

Familiar as these classics are to most cooks, they&#146;re given interesting little twists, as in the tantalizing Poached Salmon with Leek Sauce of the renowned Left Bank bistro, Chez Germaine.

It must be said that bistro food such as this isn&#146;t particularly light or healthy. Because of the high fat content, O&#146;Connor suggests that the amount of butter can be cut by half in many of the recipes without noticeably altering the flavor or texture. I&#146;m not so sure, though it would certainly help lower your cholesterol.

This appetizer from Bistro Chez Diane is served with strips of toast for dipping into the eggs. A Cabernet such as Bourgueil or a Beaujolais such as Brouilly is good alongside.

In a small saucepan, melt the butter over medium heat and saute the shallot for 2 minutes, or until translucent. Pour in the wine and bring to a boil.

Stir in the morels, tomato paste, salt and pepper. Reduce heat to low and simmer for about 30 minutes, stirring occasionally. Set aside and keep warm.

Bring a medium saucepan of water to a boil, add the eggs and immediately lower the heat so the water is barely simmering. Cook the eggs for 3 minutes. Using a slotted spoon, remove the eggs and run under cold water.

Using a sharp knife, neatly slice off the tops of the eggs and reserve the tops intact. Place each egg in an egg cup, top with a spoonful of the morel mixture, and cover with an egg top set on a slant. Place 2 egg cups on each of 4 plates and serve wit the strips of toast.