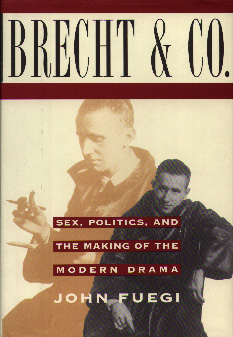 John Fuegi’s 1994 biography of Bertolt Brecht (1898-1956) is an exhaustive monument to academic scholarship gone awry. At over 700 pages (including nearly 100 pages of endnotes), Brecht and Company is the longest full-scale Brecht biography in print. It is also the most controversial. Assailed by scholars and critics who either question or dismiss its conclusions, the book frustrates even general readers with its sledgehammer abrasiveness. Fuegi’s revisionist assessment of this enormously influential 20th century poet and playwright amounts to nothing less than character assassination.

The central contention of Brecht and Company is that Brecht had neither the talent nor the inclination to write the works that bear his name and include such cornerstones of modern drama as The Threepenny Opera, Mother Courage and Her Children, and Galileo. Fuegi claims to offer documented evidence that these and many other plays, stories, and poems were largely written by three Brecht collaborators who worked with him at different periods in his life: Elisabeth Hauptmann, Margarete Steffin, and Ruth Berlau. The biography portrays Brecht as a Svengali who exploited these women in a "sex for text" arrangement, using "the sexual magnetism he could exert at will" to seduce them in bed and at the typewriter.

Fuegi’s ultimate aim is purely conjectural: he wants to prove that Brecht’s literary crimes are symptomatic of deep psychosexual character flaws. We’re informed, for instance, that Brecht’s behavior is "eerily similar" to case studies of psychopathic personalities. Fuegi paints Brecht’s middle-class upbringing in Augsburg, Germany as reflecting an environment of "sociopathic male violence" in which "the denigration of women is deemed wholly natural." Thus is the stage quite literally set for the young poet’s future abuse of his female lovers and playwriting cohorts. The book’s logic runs like this: Because Brecht was at heart a callous woman-hater, it is inconceivable that he could write plays with strong or sympathetic female protagonists, such as Saint Joan of the Stockyards, The Good Woman of Setzuan, Mother Courage and Her Children, and The Caucasian Chalk Circle. Fuegi insists that these plays are about women because – isn’t it obvious? – they were written by women.

Vilifying Brecht as a plagiarist is by no means new. All Brecht biographers touch on the well-known accusations, such as uncredited passages from the poetry of Verlaine and Rimbaud that show up in the 1927 play, Jungle of Cities. Fuegi compounds the old charges by adding scores of new ones and expanding Brecht’s misdeeds to previously unimagined dimensions. We’re told that manuscripts in Elisabeth Hauptmann’s handwriting (or her "strike pattern" on typewritten texts) prove that she was responsible for 80 to 90% of the script for The Threepenny Opera. Brecht’s sole contribution to the play, according to Fuegi, was writing the lyrics for "Mack the Knife" and incorporating a few "nips and tucks" to the overall design of the script and production.

When the evidence suggests more than one interpretation, Brecht and Company without fail chooses whatever is most damning. For example, Fuegi toys with the not unreasonable possibility that Brecht might have dictated much of The Threepenny Opera with Hauptmann seated at the typewriter. But, no, he assures us that he has carefully examined dates and itineraries to discover when Brecht and Hauptmann were in the same room together, and he is convinced that Hauptmann worked on the script alone. So tangled and absurd does this kind of reasoning become that Brecht and Company ends up poisoning its overcooked research.

Brecht’s artistic motives are depicted as self-serving and compromised at every turn. His theoretical writings on "epic theater" that have been so instrumental in the development of modern drama are recast by Fuegi as gibberish concocted by Brecht when a financial backer tells him it will sell more tickets: "Invent a theory, my dear Brecht! When one presents Germans with a theory, they are willing to swallow anything." Other biographers have stressed the diligence with which Brecht studied Marxism in developing the themes of his plays, as well as his sophisticated concepts of theatrical presentation and performance. Not Fuegi. He tells us that Brecht never understood the serious political ideas that his collaborators – not Brecht – poured into the plays. Here’s what passes as evidence: "The surviving copy of Das Kapital from Brecht’s library is almost completely lacking in marginalia and other typical signs of use."

Germany’s Communists and leftists were in disarray when Hitler was appointed chancellor in 1933. Brecht left the country for exile in Denmark and later the United States. The Nazis revoked his German citizenship in 1935. By far the most odious passages in Brecht and Company involve Fuegi’s determination to equate Brecht with Hitler and Stalin. Somehow we’re supposed to accept the notion that Brecht’s exploitation of women and colleagues was fascistic and that he gathered around him followers who were blindly attracted to his dangerous charisma:

[To] understand this century, it is essential to recognize the wholly irrational power these figures – whether Hitler, Stalin, or Brecht – exerted when they were encountered in person. Brecht is very much a part of this century of the charismatic, irrational yet effective Pied Piper powers that could, in the case of both Hitler and Stalin, lure tens of millions of supposedly intelligent beings to embrace their butchers.

Brecht may well have been manipulative and selfish as a human being, but comparing this man to Adolf Hitler and Joseph Stalin is so ludicrous that it defies common sense. It would be laughable if it weren’t so tasteless.

Hauptmann, Steffin, and Berlau were intriguing and talented personalities. Their importance to Brecht&#146;s work has never been ignored or gone unacknowledged by biographers and scholars. They were each clearly in love with Brecht the man for periods of time, and even when romantic passions cooled, they remained dedicated to assisting Brecht the artist. Fuegi&#146;s wish to bring these women to life in the pages of Brecht and Company is in many respects born of good intentions. Their stories are often fascinating. When Brecht went into exile in 1933, Elisabeth Hauptmann risked her life to remain behind in Berlin. Under the increasingly suspicious eye of the Gestapo, she managed to smuggle all of Brecht&#146;s papers and manuscripts out of Germany. Margarete Steffin&#146;s story is especially tragic, as she suffered from tuberculosis and died painfully in 1941 at the age of 33. Ruth Berlau was a dynamic actress and theater director who met Brecht during his Denmark exile. Her pluck and energy are vividly conveyed in Brecht and Company. Unfortunately, Fuegi&#146;s insistence on casting each of these women in the role of victim seriously undercuts his stated intent to give them their due as individuals. Ironically, it is Fuegi himself who seems to be exploiting Hauptmann, Steffin, and Berlau in his sinister efforts to malign Brecht.

John Fuegi was at one time a respected Brechtian authority. He founded the International Brecht Society in 1970 and edited its annual journal up until 1989, when he left the Society, presumably to work on his book. The publication of Brecht and Company in 1994 created a firestorm of controversy in both the mainstream press and academic circles. Four Brecht scholars jointly issued a 100-page chapter by chapter refutation titled "A Brechtbuster Goes Bust: Scholarly Mistakes, Misquotes, and Malpractices in John Fuegi’s Brecht and Company." It was published in the Brecht Yearbook series that John Fuegi formerly edited. One of the scholars, John Willett (whom Fuegi used as an important — and misquoted — source in his book), wrote the following:

In over 30 years in the profession I have not read an allegedly scholarly book on any subject I knew well that fell so short of minimum standards of serious scholarship. The evidence it presents is, for the most part, so flawed or unsustainable and the presentation of that evidence violates basic standards of accuracy and responsibility so egregiously that the book cannot stand up to careful scrutiny.

Bertolt Brecht’s position in the pantheon of 20th century literary giants appears secure as the millennium approaches. His stature is such that no single biography, whether hagiographic or insulting, is going to be the last word on his life and art. John Fuegi’s Brecht and Company is worth no one’s time. Virtually any other Brecht biography is preferable. Highly recommended is Frederic Ewen’s Bertolt Brecht, published in 1967, and reissued by Citadel Press in 1992.