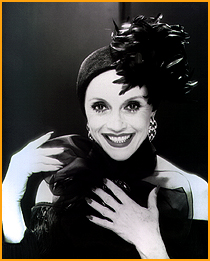 Discovering Great Singers of Classic Pop: A New Listener’s Guide to the Sounds

and Lives of the Top Performers and Their Recordings, Movies, and Videos

It is gratifying to see how the cabaret scene has expanded in the last decade. In the seventies and early eighties it seemed to be under threat even in its New York heartland and had virtually disappeared elsewhere. Nowadays, Time Out New York has a section devoted to cabaret while, here in London, Pizza on The Park continues to thrive with regular visits from such luminaries as Amanda McBroom, Steve Ross, and Mary Cleere Haran (also see: Mary Cleere Haran). In the heart of the West End, the tiny Jermyn Street Theatre has played host to Donna McKechnie and Liliane Montevecchi and featured British artists such as Linzi Hately and Rosemary Ashe.

The increase in cabaret venues and performances over the last few years has seen a corresponding increase in recordings by both established and new performers. Enterprising labels such as DRG and Varese Sarabande are regularly releasing recordings and young writers such as John Bucchino and David Friedman are writing specifically for the genre. Listed below are just a few of the disks CV recommends, some by relatively unknown singers, and which you may like to explore.

Amanda McBroom is one artist with whom most people are familiar, if only for her song The Rose which gave its title to Bette Midler&#146;s 1979 movie. She remains unusual amongst cabaret performers in writing the bulk of her own material and her work is frequently championed by other singers, notably Barbara Cook. Her particular gift is for bittersweet songs about love and relationships which are well suited to the intimacy of a cabaret setting. She has a gift for examining the pain of unresolved relationships in which too much is left unsaid. ThePortrait and Errol Flynn are as perceptive and affecting as any reflections on the parent/child bond you will ever hear. Ship In A Bottle is a wonderfully simple study of the need many feel to be defined by a relationship. The three recordings on her own Gecko label, Dreaming, Midnight Matinee, and A Waiting Heart, are all fine collections of both her own work and her perceptive interpretations of songs by other writers. Also check out DRG’s Live from Rainbow and Stars where her poignant material is set off by the charm and earthy humour she brings to her live performances.

Maureen McGovern&#146;s is an even more familiar name. She has beenparticularly well served in terms of recordings over the years – perhaps in part because of her ability to switch, apparently seamlessly, from cabaret and concert diva to jazz singer, not to mention doyenne of the70s movie theme. Her two latest recordings, both on the Sterling label, showcase her many talents beautifully. The Music Never Ends is a collection of songs with lyrics by Alan and Marilyn Bergman in lush orchestral arrangements by Mike Renzi. The Pleasure of His Company sees McGovern accompanied again by Renzi, this time just at the piano, as she glides through a selection of standards ranging in style from My Ship and Spring Can Really Hang You Up The Most to The Boy Next Door and Call Me Irresponsible. Her voice is simply beautiful and her work remains among the finest examples of faultless vocal technique aligned with perceptive lyric interpretation and clarity of emotionalexpression, all to quite stunning effect. Very few have made it sound soeffortless.

Ann Hampton Callaway is a similarly versatile performer. A number of recordings, on the DRG and other labels, potently display her lush contralto and gentle jazz style. On Sibling Revelry she can be heard in performance with her equally talented sister, Liz Callaway. The show was recorded at New York&#146;s Rainbow and Stars, sadly now closed, in 1995 and they have since performed it in a variety of venues, appearing at London&#146;s Donmar Warehouse theatre with great success in 1998. Liz, who has a soaring, limpid soprano, has starred on Broadway in Cats, Miss Saigon, and Baby and the sisters use their contrasting styles to great effect on a variety of, mostly, musical theatre standards. One of the album’s highlights is a Huge Medley of just about every single duet ever written for two female performers, all delivered with tremendous style and wit. Solo, Ann gets to demonstrate her jazz chops on Rhythm In My Nursery Rhymes and Liz excels in an impassioned My Heart Is So Full Of You from The Most Happy Fella. This last number also features on Liz&#146;s gorgeous solo recording, Anywhere I Wander, a collectionof Frank Loesser songs which runs the gamut from the drama of Never Will I Marry to the charming simplicity of the title track.

Since cabaret venues, particularly outside the US, remain concentrated in a few large cities, live recordings are often the closest many of us will get to seeing certain performers in concert. A number of artists have released excellent in-performance recordings in recent months.

On the Boulevard is a recording of the successful club act that Liliane Montevecchi has intermittently toured over the last few years. The seemingly ageless singer and dancer starred for many years at the Folies Bergere, danced in some of the last great movie musicals and, more recently, appeared in Nine and Grand Hotel on Broadway. A delightfully effusive performer, she applies her classic chanteuse delivery to avariety of material sung in both French and English. She is sexy on I Never Do Anything Twice, intense on I Don&#146;t Want To Know and charming on You Don’t Know Paree. She sprinkles anecdotes about her long career in between the numbers and the recording captures much of the flirtatious charm which makes her live appearances such a delight.

Carol Woods and Karen Saunders both are possessed of big voices and personalities to match. On Bosom Buddies (LBTV Music), these two divas sing blues-inflected versions of pop and theatre standards with passion and great good humour. Familiar tunes ranging from Not A Day Goes By to Orange-Colored Sky appear in a different light and the album concludes with a fabulous Blues Medley including No One Ever Tells You, Mean To Me, and Stormy Weather.

Those who like their singing intense and heart rending should try Judi Connelli&#146;s Live in London. This Australian artist, something of a musical theatre institution in her native country, is possessed of a powerful and dramatic voice and offers deeply emotional interpretations of Sondheim, Herman, Loesser and others. Her version of I Don&#146;t Want To Know is amongst the most dramatic and affecting that even that show stopper has ever received.

In complete contrast is Mary Cleere Haran. On This Funny World, accompanied by Richard Rodney Bennett and a small band, she offers impeccably restrained interpretations of well known and less familiar lyrics by Lorenz Hart. Possessed of the warmth and simplicityof a modern Doris Day, she carries the torch for a kind of singing many thought had died out.

Similarly delightful, in utterly different material, is Deborah Boily on her debut CD, The Song Remembers When (Dress Circle). She selects relatively unfamiliar numbers from a variety of sources – musical theatre, art songs, even country and western – and presents them in charmingly straightforward settings that allow both music and lyrics to breathe and which grow in potency with repeated listening. ..