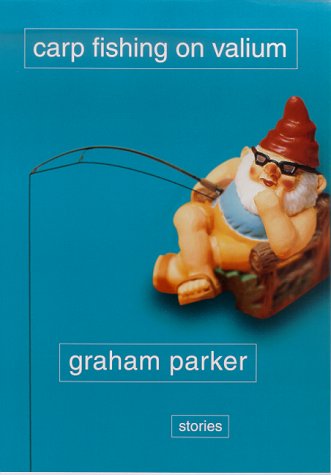 In 1976, twenty-six-year-old Graham Parker and his band, the Rumour, emerged from the British pub-rock scene and released two extraordinary record albums, Howlin&#146; Wind and Heat Treatment. Fueled by working-class rancor and rhythm &#146;n&#146; blues, Parker&#146;s style reflected the white R&B of Van Morrison as well as something of the anarchic punk music gaining notoriety at the time. But the stardom that was predicted for him never materialized, even with the release in 1979 of Squeezing Out Sparks, a blistering record that&#146;s frequently cited as one of the all-time great rock albums. Since then, Parker has spent the last twenty years moving from record label to record label, releasing a slew of moderate-selling albums — good, bad, and indifferent — and devoting some of his energies to literary pursuits. Carp Fishing on Valium is his first collection of short stories. The good news is: This fifty-year-old rock &#146;n&#146; roll dinosaur can really write.

The ten stories in Carp Fishing on Valium are narrated in the first-person by the semi-autobiographical Brian Porker (note the riotously lewd moniker Parker creates for his surrogate by simply altering one letter of his surname). The protagonist&#146;s name is silly perhaps, but the stories — even at their most comical — are never frivolous. These are full-bodied tales with the classic amenities of rising action and conflict and well-defined characters. Parker&#146;s descriptive and storytelling talents are impressive. Take this passage from the opening story, "The Sheld-Duck of the Basingstoke Canal," with Brian Porker recalling a summer&#146;s day as a thirteen-year-old in Kernley, a village thirty miles south of London:

As I bounced down the stony slope, casting fitful glances at the green horse pastures on either side, my mind sizzled with the choices that lay before me: I could keep going straight, over the sandy track at the bottom of the pastures and onward to the edge of the army married quarters in search of lizards on the heath. I could swing right at the track, head down to the back of the church, cross the road by the army museum, drop onto the tail end of Blackdown Road, and arrive at the canal under Kernley Bridge to hunt newts, leeches, frogs, and snakes, keeping a sharp lookout for pike in the weedbeds…

The story continues with a vivid account of Porker&#146;s childhood fascination with collecting birds&#146; eggs. It&#146;s ironic that when Graham Parker tries for this kind of sweetness and light in his music — such as the song "The Boy with the Butterfly Net" from his 1991 album, Struck by Lightning — the result is cloying and uninteresting, whereas his short story is a marvel of what Wordsworth called "emotion recollected in tranquility."

Brian Porker is seen at various stages between the ages of thirteen and fifty-one. The chronological arrangement of the stories provides a unifying structure for the book and offers a variety of cultural snapshots along the way. In the story "Aub," Porker is a 16-year-old Moddy Boy in the London suburbs of the 1960s. It’s a marvelous evocation of brawls and ska in the dance halls and the fury of disaffected teenage gangs. The story&#146;s mod landscape is similar to Quadrophenia, the 1973 rock opera by Peter Townshend and the Who. Parker brings his own perspective to the material by zeroing in on a poignant small-scale narrative about Brian Porker&#146;s unusual friendship with a local tough named Aubrey. In the annals of this peculiar literary subgenre of aging rock stars as fiction writers, it&#146;s worth mentioning that Peter Townshend published a collection of short stories in 1985 titled Horse&#146;s Neck. It received a good deal of recognition, although Townshend&#146;s stories are rather abstract and more akin to brooding sketches. Parker&#146;s book is superior on every level.

Not unexpectedly, Brian Porker grows up to become a rock &#146;n&#146; roll musician. The two stories dealing with the rock world — "Me and the Stones" and "Tinseltown, Morocco," — are gems. Given the frustrating ups and downs of Parker&#146;s recording career, it&#146;s hardly surprising that his take on the music business is mordant and cynical, but he also imparts a passion for songwriting and performing in spite of the corporate realities of the marketplace. While we laugh at the premise of "Me and the Stones" — Mick Jagger is run over and killed by a bus, and Porker is asked to audition as Jagger&#146;s replacement in the Rolling Stones — the strength of the story lies in the holographic realism with which the boozy and distracted Keith Richards is affectionately brought to life on the page. The story&#146;s payoff strikes the perfect note of sly sarcasm: Porker loses the gig not because of poor musicianship, but because the onstage bulge in his crotch isn&#146;t up to the standard of excellence set by Jagger.

Flowing through the book like a freshwater stream are memories of Porker&#146;s English childhood and his love of nature and birds. In "The Birdman of Cleveland," Porker has taken on a new guise as a stand-up comic traveling a circuit of dingy nightclubs across the United States. On a stopover in Cleveland, he nurses a wounded woodcock back to health in his hotel room with the help of a local ornithologist. The incident causes Porker to recall his idyllic youth in Kernley and to mourn the vagaries of his adult life:

I wish I&#146;d taken my wit and intelligence seriously as a kid and fought my way through the English class-structured education system to become something… How many fucking hotel rooms do you need to become depressed in before you hang yourself from a lighting fixture?

No excuses or dispensations are necessary when praising Graham Parker&#146;s alternate career as a musician-turned-litterateur. Nor is he a neophyte author. His first novel, The Great Trouser Mystery, appeared in 1980, and a second novel, The Thylacine&#146;s Nest, is currently being considered for publication. Carp Fishing on Valium is a first-rate collection of short stories, thoroughly deserving of an appreciative audience.