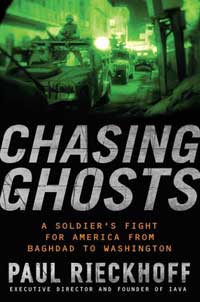 Chasing Ghosts Failures and Facades in Iraq: A Soldier’s Perspective

Among the throngs of books on the Iraq fiasco, Chasing Ghosts must have the best opening sentence: “George Bush had better be fucking right.” Hell, that may the best opening sentence of any book this year, and that sense of jilted hope is precisely what makes Reickhoff’s memoir of hisbloody year in Baghdad so uniquely compelling: Bush may fail his public, Bush may fail his country, but at the end of the day, the Commander-in-Chief has failed a soldier. And one hell of a soldier at that. A graduate of Amherst who turned down a Wall Street job to enlist in the National Guard, Reickhoff is fiercely intelligent, prolifically curious, and deeply well-versed in the history and culture of Iraq. Yet he was treated as no more than a common grunt, asked to send his men—mostly teenage boys who’d never left their hometowns prior to deployment—into lethally ill-planned missions without sufficient information, armor, or drinking water. As the first year of the occupation wore on, Reickhoff watched the tentative hope of the Iraqis turn to disappointment, anger, and finally bloody vengeance. Chasing Ghosts is the first criticism of the Iraqi occupation written by a soldier who fought in Iraq, and Reickhoff’s you-are-there accounts of street battles and massive corruption slice clean through the hogwash that passes for war coverage in the mainstream media. Embedded? Reickhoff flips the mattress upside-down to show you where the roaches live.

On returning to the U.S., Reickhoff founded the IAVA—the Iraq and Afghanistan Veterans of American—the first and largest organization dedicated to the troops and veterans of the current war. Read Chasing Ghosts. Support the IAVA. Help this uncommon patriot expose and heal the long, long wound Bush has carved in Iraq.