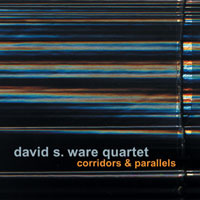 Tenor saxophonist David Ware&#146;s albums have never been boring. His deep sense of spirituality, and the sheer force of his playing, imbues his music with an intensity which has brought him a reputation as the closest thing the current jazz scene has to John Coltrane.

In the past three or four years, though, it seems as though Ware has outgrown the space allotted him by jazz, and by the world. He has launched his group, and himself, forward at top speed, attempting to break the bounds of the &#147;avant-garde&#148; and truly free his music, once and for all. The quartet&#146;s last album, Surrendered, was a tour de force, displaying all the band&#146;s strengths in a uniquely (for them) melodic context. All self-indulgence was pared away, and Surrendered delivered a powerful, cohesive set of songs, opening up their music to an entire world of potential listeners.

On this new disc, Ware has altered his music once again, and he comes closer than ever to a final abandonment of &#147;jazz.&#148; Corridors & Parallels features Ware&#146;s longtime pianist (and a brilliant composer in his own right) Matthew Shipp on synthesizer. Ware has also abandoned composition on this disc; all the tracks were improvised in the studio, then edited and remixed after-the-fact. Rather than use the electronic instrument (and the studio technology) to give the music a modish groove, though, the quartet seems to be heading in the direction of science fiction. Shipp&#146;s keyboard figures (particularly on &#147;Jazz Fi-Sci&#148;) squiggle around in the background of the music, sounding sometimes like short-wave radio transmissions bouncing back from the far side of the universe and other times like distortion, or a recording error.

On other pieces, like &#147;Superimposed,&#148; the keyboard&#146;s programmed-rhythm functions are employed to give the music a wholly synthetic sound, which is only disrupted by the unruly, organic skronk and bellow of Ware&#146;s saxophone. Not all the album&#146;s tracks are jarring, or aggressive, though. Some, like &#147;Sound-A-Bye,&#148; find Ware issuing long, droning tones from his horn while the rhythm section (bassist William Parker and drummer Guillermo Brown) constructs a delicate forest of shimmering chimes, softly tapped percussion and booming bass throbs. The self-explanatory &#147;Mother May You Rest In Bliss&#148; (Ware&#146;s mother died this year) is probably the track closest in sound to his previous work; he works at the melody like a dog on a bone, digging into it until nothing remains but scraps. Ware&#146;s ballads have always been stoic and dignified, while still seeming suffused with a deep agony, and this one (as befits its title) is no exception.

This is a fascinating record. It flies in the face of what anyone might have expected from David Ware, who&#146;s been one of the largest figures on the New York free jazz scene for years. It also goes against an unspoken tradition within Ware&#146;s chosen subgenre of jazz; while other avant-garde players (Sun Ra most notably) have employed electronic keyboards in their music, it&#146;s unheard-of for a musician of Ware&#146;s stature to take such a sharp left turn, at this point in his career. For these reasons, whatever anyone thinks of the music on Corridors & Parallels, it must be seen as one of the David S. Ware Quartet&#146;s most important recordings. It&#146;s a good thing, then, that the music is beautiful, powerful and in a few cases unforgettable. &#147;Jazz Fi-Sci&#148; is a track that breaks open the boundaries of jazz, avant-garde or otherwise, and &#147;Mother May You Rest In Bliss&#148; and the album&#146;s title track are among Ware&#146;s finest recorded moments.

In literature, science fiction often casts a clear eye on the present, through the prism of an imagined future. Corridors & Parallels does that for jazz&#151;through consciously futurist gestures, it illuminates where &#147;traditional&#148; free jazz is. While it&#146;s not a manifesto (Ware certainly doesn&#146;t seem to imply that his newly-chosen path is the only possible one), this record certainly indicates that this quartet can remain a vital, creative force for decades to come, if they so choose.

(16313)
$11.50 (as of January 25, 2021 - More infoProduct prices and availability are accurate as of the date/time indicated and are subject to change. Any price and availability information displayed on [relevant Amazon Site(s), as applicable] at the time of purchase will apply to the purchase of this product.)

$2.71 (as of January 25, 2021 - More infoProduct prices and availability are accurate as of the date/time indicated and are subject to change. Any price and availability information displayed on [relevant Amazon Site(s), as applicable] at the time of purchase will apply to the purchase of this product.)
related posts