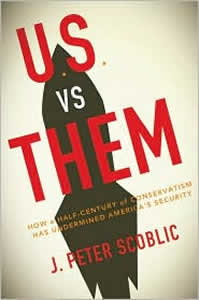 U.S. vs. Them: How a Half Century of Conservatism Has Undermined America’s Security

Of the recent books dealing with right-wing foreign policy, J. Peter Scoblic’s U.S. vs. Them may be the most ambitious. The executive editor of the New Republic, Scoblic traces the conservative perspective on world affairs from Buckley and Goldwater to Bush and Cheney. The book is a richly detailed study of a simple-minded worldview. The author emphasizes conservatives’ recklessness regarding nuclear weapons, an attitude with dangerous new implications.

Scoblic traces the Bush administration’s ideology to the early days after World War II. “Conservative anticommunists rejected the bipartisan policy of containment, dismissed negotiation with the Soviet Union as appeasement, and even insisted that a nuclear war was winnable,” he writes. The early chapters of the book offer a thorough tour of the Cold War, focusing on rightists’ attempts to sabotage arms-control agreements. But whether the subject is communism or Islamic fundamentalism, Scoblic argues that conservatives see foreign policy in terms of a heroic myth, in which America is always “a righteous protagonist facing a monolithic enemy.”

The most persistent variation of that myth is the claim that President Reagan won the Cold War. As that story goes, Reagan’s military buildup prompted the Kremlin to try to keep pace, thereby ruining the Soviet economy. Mikhail Gorbachev was then forced to introduce reforms that ultimately ended communism. Scoblic shatters that version of history by pointing out that the economy of the U.S.S.R. had already collapsed by the late 1970s and that the Soviet defense budget “remained essentially static during the 1980s.” “The Soviet Union suffered no economic distress as a result of the Reagan buildup,” he explains.

The author illustrates that Reagan’s few foreign policy successes, such as the 1987 Intermediate-Range Nuclear Forces (INF) Treaty, were the result of departures from conservative ideology, specifically regarding the value of negotiations. By the late ’80s, in fact, many of the president’s earliest supporters believed that he had sold out to Gorbachev. (National Review called the INF Treaty “Reagan’s Suicide Pact.”) Their disapproval did not stop rightists from later constructing a “Reagan doctrine” based on confrontation rather than diplomacy. The doctrine became the model for Bush-Cheney foreign policy.

Scoblic blames that approach not only for the Iraq War, but for Bush’s weak response to the possibility of nuclear terrorism. He takes issue with the term “weapons of mass destruction,” because it implies that biological and chemical weapons pose a threat similar to that presented by nuclear devices. “Chemical weapons are extremely difficult to use,” he writes, adding that they are far less lethal than nuclear weapons. The author calculates that the detonation of a (relatively small) 10-kiloton nuclear device in Washington, D.C. would kill approximately 200,000 people, while a chemical attack would most likely kill 6,000-18,000. Biological weapons are more dangerous than chemical ones, but are also far more difficult to make. Osama bin Laden has said that it is a “religious duty” for Muslim extremists to obtain nuclear weapons, so preventing that occurrence would appear to be the first duty of a War-on-Terror president.

However, President Bush’s 9/11 Commission gave his administration a “D” for its non-proliferation policy, and the evidence in U.S. vs. Them makes that grade look generous. In January 2001, a bipartisan task force issued an alarming report on haphazard security at nuclear sites in the former U.S.S.R. The panel advised that the U.S. government triple its annual $1 billion budget for securing atomic material in that region.

Bush and the GOP Congress declined to follow the recommendation, leaving funding for that program the same as before. Even after 9/11, when Congress passed $20 billion in emergency funding for homeland security, there was no money for non-proliferation efforts at old Soviet facilities. “Cooperative threat reduction, as the name suggests, hardly suits the conservative us-versus-them framework,” Scoblic states.

As a result of Bush’s indifferent stance, unsecured nuclear material at Russian sites totaled 600 tons in 2004, and Scoblic points out that “less material had been secured in the two years after the 9/11 attacks than in the two years before.” U.S. authorities still do not know how many Soviet-era tactical nuclear devices remain, and the smaller size of those weapons makes them prime candidates for theft and detonation in other regions.

The former U.S.S.R. is not the only scene of failure for conservative atomic policy. North Korea withdrew from the Non-Proliferation Treaty in 2003 and, though that country already had a nuclear reactor, Bush and his advisers chose to concentrate instead on Iraq. Scoblic notes that Bush refused to negotiate with the Pyongyang government and also declined to set a “red line” for military action, as Bill Clinton had. The president’s policy thus consisted of little more than publicly stating how evil Kim was.

Apparently unabashed by Bush’s rebukes, Kim pressed ahead with his nuclear program. In 2007, the administration switched course and negotiated a deal under which Pyongyang agreed to shut down its nuclear facilities. In return, the U.S. will provide 950,000 metric tons of non-nuclear fuel or economic aid of equal value. While the threat appears to have abated, the Bush team’s dithering and its Iraq distractions may have serious long-term consequences. North Korea now holds “significantly more plutonium for which we have to account,” Scoblic writes, adding that, “should the deal fall through, [North Korea] will be in a much stronger position than in 2002.”

U.S. vs. Them fully exposes the nuclear risks America faces as a result of Republican policies. However, the main flaw of the book is that Scoblic often treats foreign affairs as simply a realm of ideas. He misses opportunities to connect the conservative agenda to the material interests of its wealthy backers. For instance, the author highlights the contradiction between the Bush administration’s careless attitude toward non-proliferation and its extravagant funding of anti-ballistic missile systems. That disparity is absurd: Al Qaida isn’t going to launch an intercontinental missile at the U.S., and missile-defense tests have consistently proven far less successful than the program’s advocates claim. Scoblic explains Bush’s emphasis on missile defense by stating that the new weapon systems fit conservatives’ confrontational approach better than international arms-control accords.

That argument works up to a point, but it can’t fully account for Republican politicians’ obsession with anti-missile programs. However, if we expand our focus to include corporate and partisan connections, the picture sharpens. To take one example, a leading recipient of contracts for missile-defense technology is Lockheed Martin, a company with a history of close ties to the GOP. Lynne Cheney was a member of that corporation’s board of directors from 1994-2001. Likewise, one of Lockheed Martin’s vice presidents from 1993-2002 was Bruce P. Jackson, who helped draft the foreign-policy plank of the 2000 Republican platform. Jackson later served on the boards of two right-wing think tanks with close ties to the current administration. It is therefore not surprising that Lockheed boasted U.S. missile-defense contracts worth more than $1.6 billion in 2007 alone. Crony capitalism is the hallmark of right-wing governance, in foreign policy as well as domestic.

Though he at times disregards the impact of corporate profit, Scoblic deftly reveals the American Right’s malign influence on international politics. His warnings about nuclear security may well prove horrifyingly prescient.