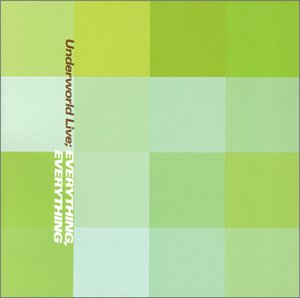 Even after almost thirty years (possibly less depending on whether you want to count the ascendance of disco, or the emergence of Kraftwerk, as the beginnings of electronic music&#146;s pop presence), it&#146;s still difficult for many listeners to imagine a &#145;live&#146; show that doesn&#146;t involve guitars, grimacing, and histrionic poses atop stage-monitors. Indeed, most live electronic music shows suck. This is well-known and well-documented, which makes it all the more shocking that Underworld would have the stones to release a live album, and a &#147;real&#148; one at that. Everything, Everything is a live album in the tradition of Frampton Comes Alive! or Double Live Gonzo; the beats throb, the crowd screams, and vocalist Karl Hyde rants over the music as compellingly as anyone in rock. It&#146;s mostly Karl Hyde&#146;s presence and contribution that have lifted Underworld out of the ranks of faceless, willfully obscure electronic acts and into the rock arena. Hyde is a great frontman and bizarre lyricist, comparable to the Fall&#146;s Mark E. Smith both in his vocal timbre and the fragmented, seemingly disconnected phrases which make up the songs. The lyric most Underworld listeners remember, from &#147;Born Slippy&#148; (their contribution to the Trainspotting soundtrack), is &#147;Lager, lager, lager, lager, shouting,&#148; which encapsulates a raucous, drunken evening better than anyone since Tom Waits.

&#147;Born Slippy&#148; appears here, its always pounding rhythm made even more forceful in the live context, and extended to nearly double its original length. Indeed, one of the great things about Everything, Everything is its adherence to live-album tradition in that respect. The 75-minute disc only has eight tracks, some of which reach nearly 15-minute running times, but which never grow tedious. The album works as a whole, though it was certainly cobbled together from an entire tour&#146;s worth of performances; particular highlights, though, include &#147;Pearls Girl&#148; (the single which first brought Underworld to some alternative-scene prominence), &#147;Shudder/King Of Snake&#148; (a trancelike, epic-length track based around a Giorgio Moroder/Donna Summer sample) and the terrific opener &#147;Juanita/Kiteless.&#148; The relentless, driving beats and Hyde&#146;s infectious vocal energy keep the listener riveted throughout. Not only a live electronic music album, but an electronic music album suited for home listening as a thematic, self-contained work rather than a collection of singles best heard in a club: Underworld&#146;s achievement is double here. This is a record not only suited to electronic music fans, but to anyone who wants pure, convulsive pleasure from music.