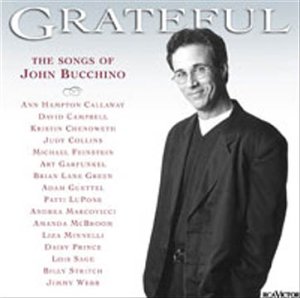 John Bucchino has been the saviour of many a cabaret singer. His lush melodies and clever, psychologically astute lyrics remain relatively unknown and can be counted on to grace any set and impress even the most jaded audience. Bucchino is not only a fine interpreter of his own work but also a talented accompanist as he proves here, where he sits in as pianist for a number of the great and good of the cabaret world who offer their takes on 16 of his songs.

The album gets off to a slightly shaky start with a somewhat lugubrious interpretation of Bucchino’s signature number, "Grateful," which fails to eclipse numerous earlier attempts including those of Barbara Cook, Amanda McBroom and David Campbell. Judy Collins’ "Sweet Dreams" is beautifully sung but misses some of the worldly pathos of Cook’s version. A husky but zestful Liza Minnelli has fun with Billy Stritch on "That Smile" but things really get under way with Daisy Prince’s "It Feels Like Home." Bucchino’s accompaniment is an object lesson in the art and Prince’s delicately sincere and pitch-perfect interpretation comes close to the incomparable Nancy LaMott’s.

Bucchino’s range as a writer astonishes. "Temporary" (sung by Lois Page), is an attempt to explain to a child the pain – and comfort – of life’s impermanence. It is followed by Patti LuPone’s utterly uncomplicated paean to "Dancing" (‘…with the wind in my hair’). Amanda McBroom is

shrewdly understated on "The Song With Violins" as a woman who just can’t give up on a man who must surely be a no-hoper. Ann Hampton Callaway glides elegantly through "In A Restaurant By The Sea" as she ruminates on the way a whole relationship can be contained within a single glance. The most unusual song on the album is "Sepia Life." Consummate storyteller Andrea Marcovicci beautifully enunciates the first (of many?) act(s?) of marital infidelity.

Performed as well as they are here, Bucchino’s melodies offer considerable rewards to listener and performer alike. Literate, compassionate, astute and intelligent, his lyrics reveal more of

themselves with repeated listenings. Any fan of that increasingly rare animal, the well-crafted song, should invest in this collection of dexterously constructed little gems.