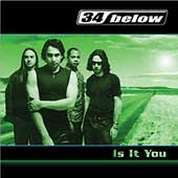 This band has a sound that modern pop purists would advise is &#145;old-fashioned&#146;. That is to miss the point of 34 Below. What this band do is to take the traditions of American rock music &#150; straightforward guitars, bass and drums, and story-telling lyrics, and use them in a manner that has served generations of bands and fans, and, on the basis of this collection, will continue so to do.

The opening song, "Jackie," sets out the style and intention of this band from the start. If you like this song, you&#146;ll carry on and enjoy the rest. This is a series of songs you can play when you&#146;ve got a long journey, either in your car or in your mind, or both. They tell basic &#145;boy-meets-girl&#146; and &#145;boy-loses-girl&#146; tales, but the skill with which they are executed overcomes the basic nature of the format. Vocals from Steve Ybarra are pitched just right on "Empty Sunday," not too macho, not too sensitive, the sort of guy male listeners would like to be, and female listeners would like to know.

"Learn To Fly" comes dangerously close to maudlin sentimentality, but it could be 34 Below&#146;s passport to radio play, and that could see this band take off in other markets larger than college radio.

The difficulty facing any band trying to make an impact in a crowded marketplace is setting out the band&#146;s style, walking the line between hitting the strengths in successive songs, without letting listeners feel they know what&#146;s coming. Pacing and track order are vital ingredients in any album. Just when this collection was starting to flag a little, in comes "Take Time" which re-states the strength of the sound &#150; the economical guitar solos and the rock solid back beat. It will make fans of live shows keen to see 34 Below when they tour again.

Success is a slippery concept. Maybe 34 Below will be content with a solid touring career, which is assured on the basis of this album. They can play the college and club circuit and be assured of a following for as long as they want it. Maybe they want hit singles, and there are several contenders on this album, not least of which is "River," the final track that really does save the best until last. Or perhaps this band want to be stadium stars. Whatever their goal, the potential is contained in this album. They have all the ingredients, all they really need are the breaks that make careers happen. They need to be championed by a major band who hear how good they are and take them out on tour to meet a wider audience. Or they need someone to see how radio-friendly their music is and get some serious syndication going. Failing that, maybe their own combination of solid touring and word-of-mouth will get them to where they deserve to be.

One thing is certain, if 34 Below continue to tour around their native San Diego without progressing any further, then there really is no justice in the world of rock and roll. Of course, if they do succeed and make the market they aim for and deserve, remember you read about them here first.