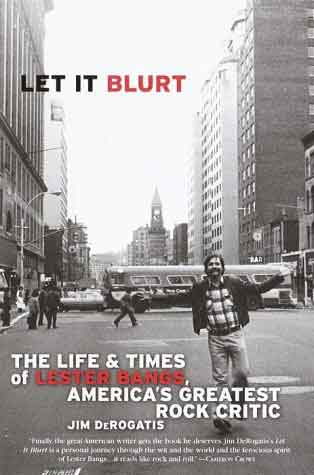 If writing about music is like dancing about architecture – a sentiment attributed to various disgruntled musicians and smartasses – then rock critic Lester Bangs was James Brown doing Frank Lloyd Wright. While even the brightest lights of his profession were awkwardly grafting intellectual, sociopolitical and stylistic frames onto rock ‘n’ roll, sometimes brilliantly if never wholly convincingly, Bangs’ pieces burned with a palpable obsession to delve beneath the surface noise and dredge up something both primal and exalted in the music he loved.

The standard line amongst Bangs obsessives is that he wrote more like a rock star than a rock critic, which is not strictly true; if anything, his pharmaceutically-fueled run-on sentences and long, winding cadences owed much more to jazz (and the jazz-crazed writings of the Beats, particularly Jack Kerouac). If anything, he wrote like the ultimate fan, every piece of sound-bearing plastic a potential epiphany, every scrap of squalling teenage trash a possible work of art in disguise. As he said in an atypically succinct statement of purpose, "the best music is strong and guides and cleanses and is life itself."

Bangs wrote his most influential work in the early ’70s, a fallow, listless era for rock ‘n’ roll. In the pages of various rock rags (especially Creem), he reacted violently against rock’s dull post-Woodstock complacency, trashing the counterculture icons of the moment as gleefully as John Belushi smashed Stephen Bishop’s acoustic guitar in Animal House. (Not for nothing is one of his most celebrated pieces entitled "James Taylor Marked For Death.") He plumped instead for the likes of the Count Five, the Stooges, the Troggs and the Godz – bands that were summarily drubbed by the press and largely dismissed by the public, but in whose bone-simple (and sometimes utterly inept) way kept the grubby pulse of rock ‘n’ roll from flatlining entirely.

It’s an aesthetic that, like the innovations of his beloved Velvet Underground, has been so thoroughly assimilated into the mainstream that it’s hard to impart just how radical, even seismic, it must have seemed at the time. Punk rock would be unimaginable without him. Now that the novelty’s worn off and many of his subjects have been relegated to the remainder bin of history, it’s become possible to see Bangs’ writing for what it is – a highly personal story, meted out a few hundred words at a time, about one man’s attempt to reconcile his lonely obsessions and compulsions with a desire to break down barriers, to connect with others, a quest that was both aided and choked off by those self-same obsessions.

He never quite made it out of the rock-mag ghetto to become the author he dearly wanted to be. The closest he got was a couple of twisted variations on the standard rock band fan bio, at least one of which (Blondie) was sufficient to estrange him from the same New York punk/new wave scene he helped will into existence. Had he made it past April 30, 1982, it’s hard to say whether he would have wound up a respected and mature cultural commentator or a pathetic, burned-out Hunter Thompson-esque shadow of his former brilliance.

All that remains is a messy, scattered legacy – millions of words, both puerile and sublime, left behind for his survivors and heirs to sort out. Two of them have attempted to do just that. Greil Marcus, his first editor at Rolling Stone, upheld a promise made years before and collated a mere fraction of Bangs’ writings both published and unpublished into the 1987 anthology Psychotic Reactions and Carburetor Dung. It’s one of the few essential rock tomes, even if it inevitably reveals as much about its editor’s prejudices and proclivities as its author’s. (Put simply: lots of Elvis, no Sabbath.) Now, Jim DeRogatis, a Bangs disciple of uncommon credentials – he conducted the last interview with the writer a mere two weeks before his death and, like Bangs (and Marcus, for that matter), was banished from Rolling Stone for writing one too many negative reviews – has leapt into the breach, giving Bangs the straight biography treatment with Let It Blurt.

And "straight" is the operative word. He repeatedly claims Bangs as his spiritual forefather, but really he’s closer in spirit to his fellow Chicago Sun-Times scribe Roger Ebert – a decent, journeyman writer with a fair wit who won’t likely be inciting any cultural revolutions. Nothing intrinsically wrong with that, certainly, but DeRogatis’ cautious take on his subject manages to squeeze much of the vitality out of Bangs’ short, turbulent life. To be fair, it’s a journalistically sound job, condensing over 300 interviews and sundry other source materials into a fast-moving narrative that gets the job done in a little over 250 pages. But on the whole, Let It Blurt‘s potential seems stymied by one of criticism’s biggest enemies, undue reverence. Careful not to get too preachy when it comes to some of Bangs’ darker traits nor engage in gushy hagiography, the author winds up occupying a rather flat, arid patch of middle ground.

This actually works to his advantage when contending with Bangs’ marathon drug and booze binges, which are lurid enough without embellishment (the image of a fan coerced into shooting a filthy and sweaty Bangs up with speed in an Austin bathroom won’t soon fade from memory), but the occasional authorial intrusion – say, a critical analysis of the writing itself – wouldn’t have hurt. As it stands, the objectivity can get maddening, especially considering the subject – whether it was music or booze or drugs or women or the act of writing itself, Bangs seemed never to have an impassive thought about anything (even his ambivalence was passionate), and that passion, while clearly visible at all times, never leaves its airtight display case.

One leafs through Let It Blurt wondering what another, more inspired rock writer could have made of this story. (Bangs’ upbringing alone – born to a fanatical Jehovah’s Witness mother and an ex-con father who died an early, horrific death – seems tailor-made for his old drinking buddy Nick Tosches.) But since this is the only Lester Bangs biography we’re ever likely to see, take your pleasures where you can find them, whether it’s the often-hilarious evocations of the bad attitudes and worse behavior of Bangs and his colleagues at their early-seventies peak, the deluded (and perhaps inevitable) attempts of the critic to cross over into rock stardom himself, and several priceless images like the "rock ‘n’ roll" AA meetings with both Bangs and his hero-cum-sparring partner Lou Reed in attendance. And DeRogatis concludes the book on a high note with a semi-obscure piece from the man himself, the uproariously funny (and rather accurate) "How To Be A Rock Critic." Of course, after all the descriptions of the freelancer’s life that precede it, the vicious editors, uncooperative interviewees, pitiful paychecks and squalid living conditions (this book is a rarity amongst biographies: the rags-to-more-rags story), one might well wonder why anyone would want to be one in the first place.

To answer that, well, since DeRogatis was wise enough to let Lester Bangs have the last word, it seems highly appropriate that I do the same here:

Don’t ask me why I obsessively look to rock ‘n’ roll bands for some kind of model for a better society… I guess it’s just that I glimpsed something beautiful in a flashbulb moment once, and perhaps mistaking it for a prophecy have been seeking its fulfillment ever since. And perhaps that nothing else in the world ever seemed to hold even this much promise.