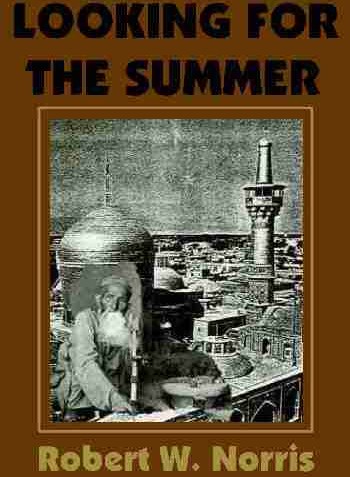 Robert W. Norris&#146;s Looking for the Summer is a graceful autobiographical novel that breathes fresh life into a perennial genre: the spiritual bildungsroman. The theme of a questing expatriate who renounces Western materialism in favor of an exotic pilgrimage to the East will be familiar to anyone who has fallen under the spell of W. Somerset Maugham&#146;s The Razor&#146;s Edge or Jack Kerouac&#146;s The Dharma Bums. Norris&#146;s protagonist and narrator is David Thompson, an aspiring novelist and self-proclaimed &#147;romantic anarchist.&#148; Bitterly disillusioned while serving in the Air Force during the Vietnam War, David chooses to become a conscientious objector. It&#146;s a decision that lands him a year in military prison charged with &#147;willful disobedience.&#148; After the war, he seeks solace and literary inspiration in Paris. A chance encounter with two businessmen, one from Iran and the other from Afghanistan, results in David joining them on a trek across Europe and the Far East.

Lacking the brash self-confidence of a radical firebrand, David is something of a holy fool slouching toward wisdom via the Keatsian mode of negative capability. He sees himself as &#147;representative of a new, lost, paranoid generation.&#148; As his travels immerse him further in Third World geopolitical tensions and complex ideological struggles, he begins to question his own motivations for the choices he&#146;s made. When an underground cell of Iranian dissidents embraces David for his perceived anti-Americanism, he confesses to them: &#147;I can honestly tell you that fear and cowardice played a much larger role than courage in taking my stand."

The author is savvy in recognizing that self-discovery today is as much a psychoanalytical process as a religious experience. The sight of an elderly shopkeeper in Delhi, for example, triggers an extended reverie about David&#146;s idyllic childhood in northern California. &#147;I realized suddenly,&#148; he tells us, &#147;that what I had seen in the face of the old shopkeeper was the gentle, compassionate, loving visage of my father before all the trouble began.&#148; Moreover, as David gazes upon the poverty and wretchedness of India, he sees &#147;a manifestation of the pain, shame, and frustration that I had caused my father.&#148; Such a solipsistic epiphany may strike some readers as the apex of American narcissism. But it functions as a wholly believable moment of transformation for the novel&#146;s callow protagonist.

For a narrative that revels in sometimes long-winded philosophical and political discussions, Looking for the Summer contains surprising elements of suspense. Because the story takes place during the 1970s Cold War era, David&#146;s road trip in a BMW across Soviet-dominated Eastern Europe is as perilous and foreboding as anything out of a vintage John Le Carre espionage novel:

We continued into the night toward Bulgaria, the BMW rushing past Soviet military trucks on a winding, rocky road. We arrived at the Yugoslav-Bulgarian border early in the morning. A Bulgarian military guard detained us for two hours before granting our visas at dawn. An eerie feeling possessed me as we passed behind the Iron Curtain. The word that came to my mind most as we passed that day traveling through the despair of Bulgaria was &#147;grey.&#148; Everything we passed was synonymous with gloom, depression, suspicion. Everything was grey: the hills, the earth, the buildings, the sky.

Behind the wheel of the car is David&#146;s newfound Iranian friend, Hasan, whose reckless driving and blustery epithets (&#147;You never see a Turk give way to another driver… They are donkeys&#146; asses!&#148;) provide a welcome touch of comic relief. Hasan will later prove his mettle in a tense standoff with Kurdish bandits on a treacherous mountain road along the border between Turkey and Iran.

Although published prior to the events of 9/11, it is impossible to pick up Norris&#146;s novel without a heightened interest in its vividly depicted locales in a part of the world where our attentions are now so intensely focused. Several fascinating chapters are devoted to David&#146;s stay in Afghanistan. Written with a novelist&#146;s eye for characterization and a reporter&#146;s skill for observation, Looking for the Summer is the kind of small press gem that is often overlooked but is well worth seeking out.