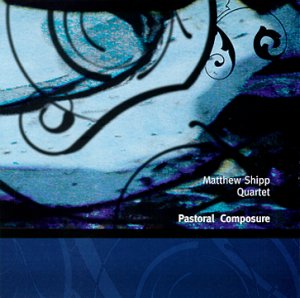 Matthew Shipp has risen over the past eight years to become the preeminent pianist in the New York "free" or "avant" jazz scene. He has proved occasionally controversial, nearly reaching the point of physical confrontation with arch conservative critic Stanley Crouch over Crouch’s public snubbing of him at a jazz critics’ award show. But just as his enthusiasm for professional wrestling adds a dimension to the traditionally academic profile of jazz musicians, his latest CD demands hearing on a level significantly divergent from all that has come before in his career.

Pastoral Composure inaugurates the Blue Series, a collection of releases curated by Shipp for the Thirsty Ear indie-rock label. The series is intended to challenge listeners’ preconceptions, and this release does that, and more.

Shipp’s early reputation was built on perceived Cecil Taylor-like blocks of sound, more rooted in critical shorthand than musical actuality (he acknowledges Taylor as a vital precursor, but prefers to cite Bud Powell, Monk and Andrew Hill as truly central influences). His first few records, Circular Temple and Prism in particular, were brilliant but sometimes off-putting. Forceful, insistent, they presumed a familiarity with the free-music idiom and seemed impenetrable to unschooled ears. His duo collaborations (particularly Zo, with bassist/musical soulmate William Parker) were almost unremittingly abstract, offering moments of gemlike beauty but within a package which often deterred, seeming to verge on the combative. Shipp was breaking with tradition at full sprint, and if the "jazz audience" wasn’t following, he wasn’t looking back to see.

Surprisingly, due in large part to the patronage of alternative-culture figurehead Henry Rollins, Shipp’s audience began to grow not from within jazz circles, but from punk-rock crowds who seemed to find the energy in free jazz that was so lacking in the enervated "indie" rock scene of the early-to-mid-90s. (This rock-to-jazz audience has now become quite sizable, and stable, even

as indie rock has collapsed entirely in on itself.) Shipp and Parker were able to embark on successful tours of colleges and small rock venues; in 1999, the David S. Ware Quartet opened a New York concert by Sonic Youth.

The acceptance of free jazz among rock audiences, on the one hand, makes Pastoral Composure a surprising move, and on the other hand sets the stage for Shipp’s final vault to a significant, indisputable aboveground profile as a pianist and composer.

The disc is perhaps the most straightahead item in all of Shipp’s recorded catalog (it’s of a pair with the upcoming David Ware album, a subject for discussion in May when that record is released), an astonishing record which in its embrace of simple (though never simplistic) composition and Modernist concepts of beauty and melody creates a soundworld even the most tentative listener can fearlessly enter. The stage is set for transformation immediately, with the disc’s opening cut, "Gesture." A throbbing Latin-tinged piece, it is immediately and almost shockingly referential of "Solea," the triumphant finale to the Miles Davis/Gil Evans album Sketches Of Spain. Flugelhornist Roy Campbell (of New York improv quartet Other Dimensions In Music, among other groups) plays long, discursive lines of heartbreaking clarity here, over Shipp’s (and Parker’s, and drummer Gerald Cleaver’s) repetitive, pulsing foundation. The third cut is a version of Duke Ellington’s "Prelude To A Kiss," rendered in significantly more respectful and traditionally beautiful manner than Shipp’s demolition of Gershwin’s "Summertime" on Zo (or his and Parker’s dissection of "Take The A Train," a common part of their duo performances). Between these two pieces, though, lies probably the greatest shock in all of Shipp’s recorded catalog. "Visions" is a shimmering bop trio cut which dispenses with all of his avant garde or "out" touches and plays itself out like something from Blue Note, 1958. It’s not a betrayal of his aesthetic; it’s an expansion of it, filtered through a complete acknowledgement of tradition and history. And this is emblematic of every aspect of Pastoral Composure. By appearing to go backward, Matthew Shipp has in fact catapulted himself forward, past all his contemporaries to the vanguard of current jazz composition.

Jazz has, over time, bounded itself into what can seem like armed camps, hurling vituperation back and forth in gossipy interviews. Shipp has remained largely aloof from this, and without seeming to accept any challenge to rein himself in, has delivered a masterwork. Pastoral Composure has the potential to shatter jazz’s boundaries by force of its artistry alone, and prove to whoever still needs evidence that Shipp can deliver lush and brilliant music in any of jazz’s subgenres.

(18723)
$4.89 (as of January 23, 2021 - More infoProduct prices and availability are accurate as of the date/time indicated and are subject to change. Any price and availability information displayed on [relevant Amazon Site(s), as applicable] at the time of purchase will apply to the purchase of this product.)

(18132)
$2.85 (as of January 23, 2021 - More infoProduct prices and availability are accurate as of the date/time indicated and are subject to change. Any price and availability information displayed on [relevant Amazon Site(s), as applicable] at the time of purchase will apply to the purchase of this product.)
related posts