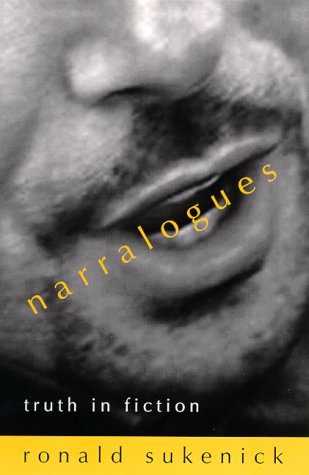 Ronald Sukenick is one of the leading lights of postmodern literature in the United States. He was a founding member of the Fiction Collective, a famed alternative press started in 1974 and still thriving. His first novel was published in 1968. Since then, in over a dozen works, he&#146;s written short story collections, literary criticism, cultural history, and several more novels. Narralogues, published this year by the State University of New York (SUNY) Press, is a slim 133-page volume, but it has the wide-ranging scope of a major work. For anyone whose eyes glaze over when confronted with innovative writing, Sukenick&#146;s book is surprisingly accessible and enormously fun to read. "I&#146;ve got the hots for you," he informs us in the introduction. After all, storytelling is "an erotic adventure." True to his word, Narralogues is a palpably seductive blend of autobiography, fiction, satire and politics.

Sukenick&#146;s view is that literary fiction has been thoroughly usurped by the entertainment industry. We&#146;re drowning in novels and stories designed to narcotize us with "mind-numbing make-believe" and "intellectual passivity." Too often, the most interesting writers are marginalized and ignored. Valiant small presses are fighting "an uneven battle" against "publishing conglomerates and the electronic media." Sukenick wants his work to stand as a rebuke to the avalanche of mainstream literature that "robotically reflects the status quo with no illuminating angle of its own." If this sounds as if he&#146;s written little more than a harangue aimed at our media-saturated age, that would be a misconception. "Literature," he says, "should not try to mirror our experience, it should intervene in it." Sukenick&#146;s goal in Narralogues is to intervene in our lives as readers, to liberate our confining notions of what fiction is and what it is capable of expressing.

With influences as diverse as Plato&#146;s Dialogues and Laurence Sterne&#146;s Tristram Shandy, and with nods to the American Beats and the French Situationists, the ten "narralogues" that make up Sukenick&#146;s book mesh disparate styles and forms. At times, he abandons words altogether for pictograms that resemble cave drawings. A recurring character named Waldo — an underpaid teaching assistant and part-time pornographer — exclaims at one point: "I&#146;m simply saying that the forms of culture we have to work with don&#146;t work and that the only kind of form worth talking about today is form that&#146;s completely eccentric." There&#146;s no shortage of eccentricity in Narralogues. Categories and genres collapse into one another and redefine themselves. How can words validate our lives when "even autobiography has become a commodity"? Sukenick believes that we need a subversive literature that isn&#146;t afraid to question our cultural assumptions. He delights in turning his stories upside down and inside out, such as when a seemingly fictional moment is reinterpreted for us in a postscript titled "Feedback Fed Back":

The Norwegian freighter episode, speaking of human interest, was actually a trip I took with my ex-wife, with whom I remained deeply if ambivalently attached. She died recently of breast cancer. She always used to complain that I didn&#146;t put her into my stories. So here she is, now that it&#146;s too late.

Like a circus ringmaster or a loquacious talk show host, Sukenick flits in and out of his narralogues, sometimes appearing in the first person, sometimes in the third. Characters argue with him, or talk about him behind his back. He becomes a Henry Milleresque sexual braggart proclaiming that a character&#146;s lewd exploits are actually based on Sukenick&#146;s "explosive sexuality" following a reading at the University of Iowa Fiction Workshop. In another guise, he&#146;s a sour expatriate drawing a startling parallel between the looted ruins of Rome and his dying mother robbed of her medical insurance in Reagan&#146;s supply-side America. He can also be found in the Colorado Mountains (Sukenick is an English professor at the University of Colorado, Boulder) contemplating the apocalyptic symbolism of a raging snow storm while fretting about the C.I.A.&#146;s interest in one of his novels.

What is the net effect of this hyperactive authorial gamesmanship? Without personally knowing Sukenick, for instance, can we be certain that the postscript about his ex-wife&#146;s death is any more "true" than the assumed fiction that precedes it? The subtitle of his book is "Truth in Fiction," and it seems clear that literary truth for Sukenick isn&#146;t about documentary mimesis. Rather, it&#146;s being faithful to our innate sense of creativity and artistic vision: "the moment of truth in fiction is the moment of composition." Sukenick still has at least one foot in the 1960s counterculture revolution. He fervently believes that writing should be a radical life-affirming enterprise, or what his teaching assistant Waldo refers to as "Sukenick&#146;s yahoo ideas about art and social wellbeing, his corny conviction that art in the long run could only justify itself by helping to create a culture that abetted the richness of common experience and encouraged social justice."

Waldo is a wonderfully sly creation. Appearing in four of the book&#146;s narralogues, he has a love/hate relationship with Sukenick, who is Waldo&#146;s professor, mentor and literary guru. Waldo is the sort of disingenuous campus leftist that Sukenick can&#146;t resist satirizing:

[Waldo&#146;s] favorite thing was to methodically seduce as many of the coeds in his classes as possible, the better to politicize them. It was one of the advantages of being a low paid, no-benefit academic temp. Besides, he could double dip by using the seduction adventures in writing pornography to supplement his income. He also liked to get drunk and drive fast.

In the book&#146;s introduction, Sukenick admits to having been stung by left-wing critics who felt his work "didn&#146;t come to grips with political reality." Waldo&#146;s character seems in part a response to what Sukenick perceives as leftist hypocrisy and tone deafness toward the arts. Throughout the book, leftists and neoconservatives alike are skewered as narrow-minded ideologues. Waldo is more than a poseur, however. He&#146;s able to take to heart what Sukenick teaches him. In a delicious twist of poetic injustice, Waldo eventually becomes a famous novelist by aping his teacher&#146;s writing style. Sukenick, meanwhile, remains at the university, languishing as "an author of the kind of literary fiction nobody was much interested in any more."

It&#146;s hard not to see Waldo as representative of hot young writers like David Foster Wallace and Dave Eggers, both of whom have brought a domesticated form of postmodernism to the bestseller list. Sukenick might be inclined to shake his fist at the heavens and wonder why his own work — which would surely appeal to the Wallace and Eggers crowd — hasn&#146;t met with similar success over the years. Certainly Narralogues and his extraordinary 1999 novel, Mosaic Man, prove that Ronald Sukenick is writing today with the kind of lucidness and artistry that few authors attain in the course of their careers.

$2.71 (as of January 26, 2021 - More infoProduct prices and availability are accurate as of the date/time indicated and are subject to change. Any price and availability information displayed on [relevant Amazon Site(s), as applicable] at the time of purchase will apply to the purchase of this product.)

(6664)
$2.06 (as of January 26, 2021 - More infoProduct prices and availability are accurate as of the date/time indicated and are subject to change. Any price and availability information displayed on [relevant Amazon Site(s), as applicable] at the time of purchase will apply to the purchase of this product.)

(22448)
$17.70 (as of January 26, 2021 - More infoProduct prices and availability are accurate as of the date/time indicated and are subject to change. Any price and availability information displayed on [relevant Amazon Site(s), as applicable] at the time of purchase will apply to the purchase of this product.)
related posts