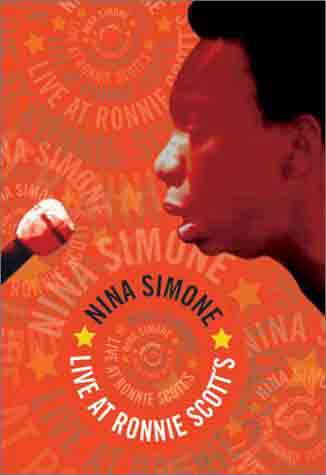 On her very first LP, on the Bethlehem label in 1957, there was, in the singing and piano playing of Nina Simone (1933-2003) an authority, an artistic confidence unusual in a novice performer of 24. She had been trained for a classical piano career, including studies at the Julliard School. But she learned early on that there were discriminatory obstacles to a black artist on the classical circuit and she shifted gears into jazz. (She named John Coltrane, Miles Davis, Duke Ellington, and Oscar Peterson as her idols.) And, as she stated with more than a little bitterness on more than one occasion, she performed folk and pop music as well, because jazz alone wouldn’t pay the bills.

That first Bethlehem album included her interpretation of Gershwin’s "I Loves You Porgy." It was a hit and nobody has sung it better since, not even Nina Simone. She sings it on a newly released concert DVD, Nina Simone Live at Ronnie Scott’s, which was taped in 1985 at the popular London club. The delivery clearly suffered after a quarter of century of constant audience demand for the song; she seems just to be going through the motions.

Indeed, this resuscitated material will be of more interest to Simone fans as a curious, somewhat off-guard look at the personality of the singer, rather than as prime examples of a fine artist at her best. She wears a strapless gown, but the lights and the room were hot–she interrupts her songs more than once to mop her dripping face with a towel. The sound quality is variable as well and the cutting between songs and interview segments often seems designed to cover problems in the tapes.

Still, there are moments here when Simone creates the magic that made her the star she was. "If You Knew," her own composition, is a gentle, yearning love song, enhanced by her virtuoso piano playing. (She’s given brilliant support throughout by timpanist Paul Robinson.) For "Fodder in her Wings," she starts playing on a harpsichord and then switches to one hand on the harpsichord and one on the piano as she delivers this poetic lament, also her own song. It builds to a throbbing intensity and she is clearly pleased with her performance at the conclusion of the song.

Simone wrote "Mississippi Goddam" when the civil rights movement was in high gear and the anger it expressed came from deep inside. It was mesmerizing when she sang it in the 60’s. At Ronnie Scott’s, she flies through it as if obligated, no longer connecting with the roots of her own song. After her early success, Simone was an angry woman; on the positive side, that anger energized some of her songs, but she was also well known for turning her anger on club and concert audiences.

By the 80’s, her concerns seem to be more personal than political. She sings a sad and moving "For a While" (Bob Gaudio/Jake Holmes), a declaration of love after the love affair is over. (Jake Holmes has been quoted about this song: "For five minutes the sun is shining and everything is beautiful. Then all of a sudden you realize that the person you cared about is gone, and it all comes back…one of those little holes in grief when it becomes even more painful.")

And, of course, Simone wraps with "My Baby Just Cares for Me," a song that was on the original Bethlehem disk. As a result of a television commercial, it became a smash hit for her thirty years later in 1987 and reinvigorated her career.

"I was born a child prodigy," she says, matter-of-factly in part of the interview, "My music is a gift from God." It was a gift variously molded by her race, her anger, and her personal life. Like Josephine Baker, Dexter Gordon, and James Baldwin, Nina Simone was an expatriate who sought in Europe a cultural environment free of the racial discrimination prevalent in American society. She died at her home in France on April 21, 2003.