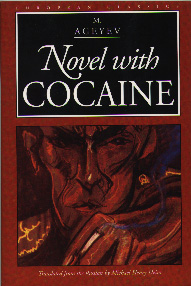 Novel with Cocaine is narrated by a young Russian hedonist living in Moscow during the tumultuous years of 1916 to 1919. As the country plunges deeper into the First World War, Vadim Maslennikov plunges instead into prostitutes. When the Communist Revolution begins to unfold, Vadim prefers to unfold packets of cocaine and narcotize himself into oblivion.

This is a cold-eyed and unsettling novel, told with sardonic humor and voluptuous imagery. As we follow Vadim&#146;s downward spiral into addiction, we&#146;re confronted with the classic opposition between grim social reality and the insatiable human desire for bodily pleasure. Surprisingly, the novel&#146;s concerns are not overtly political. The Revolution is nothing but distant thunder to Vadim&#146;s glazed perceptions. He is disdainful both of bourgeois privilege and smug Communist ideology. But the harshest judgments are reserved for his own self-loathing and the contradiction he perceives within his psyche: "sensuality and spirituality were for some reason completely separate in me."

The publishing history of Novel with Cocaine is as startling as the book itself. The author&#146;s name, M. Ageyev, is a pseudonym for a writer whose identity is no longer known. (At least one scholar is convinced that the writer was Vladimir Nabokov, but this theory is almost universally dismissed.) The manuscript was originally published in the early 1930s in a Paris-based Russian-language literary journal, and shortly thereafter in book form. The author was presumed to be an emigre living in Istanbul. Apparently, his plans to settle in Paris never materialized. Novel with Cocaine was largely forgotten until rediscovered in the 1980s and translated into French, then into English. As to the fate of the author, it is all too easy to suspect the worst. Translator Michael Henry Heim, in his introduction to the 1998 Northwestern University Press edition of the novel, suggests that the most likely scenario is that sometime in the 1930s Ageyev "returned to the Soviet Union, and any emigre returning at the time of Stalin&#146;s purges faced almost certain arrest and deportation to the death camps."

The intriguing question as to what extent Novel with Cocaine is autobiographical must remain a mystery. One&#146;s suspicions are that much of the book derives from an intimate familiarity with cocaine addiction. The passages detailing the furtive procurement of the drug and the elaborate rituals surrounding its use are remarkable for their documentary vividness. Especially convincing are descriptions of the "quietly pulsating core of exaltation" that define the drug&#146;s intensity and allure. Drinking a cup of coffee while high, or smoking a cigarette, becomes merely "a vent for unbearable, surplus euphoria." Of an equal extreme are the "unbounded disgust" and sickness that engulf Vadim when the effects of the drug wear off.

Cocaine doesn&#146;t, in fact, enter the narrative until the final third of the novel. The earlier portions of the book are taken up with a somewhat more traditional coming-of-age story. Vadim is seventeen years old, bright in school but disinterested. He is being treated by a doctor for syphilis, but even before the symptoms have receded he is debating whether to sleep with another woman, knowing full well that he risks passing the disease on to her.

Vadim&#146;s home life is miserable and money is scarce. We learn that his father died a year or so ago – probably in the war – and that his mother remains deeply mournful. She is mistreated or ignored by Vadim at virtually every turn. When she comes to the school in shabby clothes to pay her son&#146;s overdue semester fees, students ridicule the disheveled woman. Vadim pretends not to recognize her. In a later chapter, he will beat her and steal from her to help fuel his cocaine habit. Only when he is dosed on the drug does Vadim feel "the sweet shudder of love" for his mother.

If Novel with Cocaine can be said to have a moral conscience – at least early on – it is perhaps the character of Vasily Burkewitz, the brilliant classmate whom Vadim idolizes. Burkewitz delivers a dazzling classroom oration on the historical roots of economic disparity. Later, he lectures a fellow student during recess on the evils of anti-Semitism, and in a remarkable scene, he takes a priest to task for not speaking out against the war with Germany, a war which Burkewitz labels "fratricide" because so many students have lost their fathers on the battlefield. Yet – in one of the novel&#146;s crowning ironies – the intellectual exuberance of Burkewitz seems to mirror Vadim&#146;s overwrought sensuality, one route leading to Communist ideology, the other to cocaine addiction. When Burkewitz grows into a hardline revolutionary, it is a transformation that Vadim cannot tolerate:

I had tried several times to renew my acquaintance with Burkewitz, but stopped seeing him altogether when it proved impossible for the two of us to find a common language. Burkewitz had become a revolutionary, and the only way to talk to him was to wax indignant over the civic sins of others or confess one&#146;s own sins against the commonweal. I found this attitude odious and humiliating. While I was accustomed to hiding my feelings behind a veil of cynicism or, at best, making a joke of them, Burkewitz used his highflown ideals to condemn both humor and cynicism…

The real achievement of this mysterious and evocative novel is its refusal to dissolve into a simplistic allegory or palliative. Its ironies are sophisticated and its pessimism is tough-minded. A fascinating section titled "Reflections" combines Vadim&#146;s horrific drug hallucinations with a meditation on the psychology of inertia. If Vadim&#146;s despair is ultimately incurable, he nevertheless comes to understand that an addict&#146;s compulsion is born of the same desire that compels a Communist or a capitalist, a businessman or a humanitarian: "The reason behind human activity, as diverse as that activity may be, is always one: man&#146;s need to bring about events in the external world which, when reflected in his consciousness, will make him feel happiness."

For Vadim, cocaine is simply a shortcut to happiness – "instantaneous happiness on a scale I had never dreamed of before." The drug removes any need for action in the world beyond his own self-absorption. This is, of course, the kind of perverse logic that goes hand in hand with addiction. But the accomplished – and sadly unknown – writer who crafted this insidiously artful novel makes perverse logic seem right as rain. "Our souls," Vadim concludes in Novel with Cocaine, "work like swings: the stronger the push towards the nobility of the soul, the stronger the swoop down towards the fury of the beast."