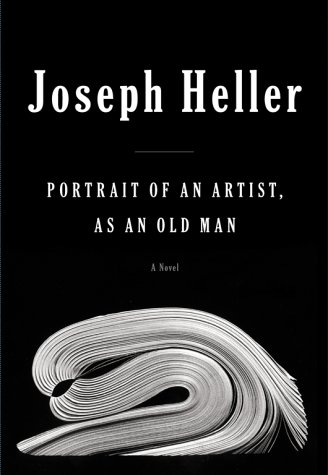 Joseph Heller reportedly finished writing Portrait of an Artist, as an Old Man just before his death last December at the age of 76. The novel has been posthumously published with little fanfare. One can only surmise that Simon and Schuster knew the book wasn&#146;t much of a capstone to Heller&#146;s celebrated literary career. The stark black-and-white cover is so unappealing that it seems intended to dissuade readers from even bothering to look inside. Regrettably, there is ample cause to be forewarned. While there are passages as caustic and funny as anything Heller wrote in his lifetime, the narrative is disjointed and gives the unfortunate impression of being an incomplete draft rather than a polished work.

At first, this inchoate quality almost works to the book&#146;s advantage, since it is literally the story of an aging author, Eugene Pota, who has run out of ideas for his next novel. We&#146;re presented with Pota&#146;s discarded plot outlines and excerpts from abandoned stories, along with his dyspeptic rants about writing, growing old, marriage, sex, and adultery. But Heller fails in weaving these elements into a larger overarching coherence. Conversely, if his intent was to write a postmodern anti-novel, Portrait of an Artist, as an Old Man isn&#146;t unconventional enough to warrant its ragged formlessness. There are listless stabs at a kind of metafictional playfulness and experimentation, but the results are unfocused. The curious revelation that "Pota" is an acronym (it&#146;s no brain teaser) is more likely to be greeted with a baffled shrug than an appreciative smile.

The best satirical piece in the book is prime Heller: a mordant 20-page story titled "Tom Sawyer, Novelist." The fictional Sawyer steps out from the pages of Mark Twain and declares that he, too, wishes to be a writer. But Sawyer&#146;s creator is unable to offer advice or inspiration. Twain is deeply depressed over mounting debts, a failed publishing company, the death of a son and daughter, and a fickle public that isn&#146;t much interested in his cynical late works like Pudd&#146;nhead Wilson. Undaunted, Tom Sawyer sets off across America in search of a mentor. What he finds instead is a litany of awfulness: the alcoholic Jack London is dead at forty; Herman Melville is toiling in obscurity; Stephen Crane succumbs to tuberculosis at twenty-eight. To Sawyer&#146;s dismay, the American literary scene is nothing but a "mortuary of a museum." At the end of his travels, his resolve is clear: "Tom Sawyer would no sooner think of a career writing fiction for a living than placing himself in front of an oncoming locomotive or diving headlong from the highest cliff he could find into the Mississippi River."

Heller&#146;s subjects have varied over the years, but his trademark blend of fatalism and absurdity has remained a constant since Catch-22, his seminal World War II satire published in 1961. His style proved remarkably adaptable, whether skewering middle-class marriage and the corporate workplace in Something Happened (1974), Washington politics in Good as Gold (1979), or the Old Testament in God Knows (1984). Portrait of an Artist, as an Old Man, however, never locates much of a target for Heller&#146;s gifts. Eugene Pota, like Heller, is a successful writer with a comfortable lifestyle. As we read his cornball sketches — slangy scatological updates of Greek myths, Biblical pastiches, a modern slapstick retelling of Kafka&#146;s "The Metamorphosis" — we&#146;re left puzzled as to the point of it all. (It&#146;s hard not to suspect that Heller pulled most of this hit-and-miss material from his own reject files.) Nothing appears to be at stake, either artistically or psychologically. The novel&#146;s many self-referential asides are less ironic than merely banal: "This is a book about a well-known, aging author trying to close out his career with a crowning achievement, with a laudable bang that would embellish his reputation rather than with a fainthearted whimper that would bring him only condescension and insult." In the case of Joseph Heller&#146;s final work, the lion&#146;s share of "condescension and insult" deserves to be directed at Simon and Schuster. It&#146;s inconceivable that Heller meant the book to be published as it stands.

But even if this is the book he wanted us to see, it clearly hasn&#146;t received the attention of a copy editor. There&#146;s a clever moment when we&#146;re told that one of the characters is facing a Catch-22, but when the identical thing is said about another character ten pages later it&#146;s a pretty good bet that Heller — or a decent editor — would have preferred to excise one or the other of these in-joke references. The first one makes us laugh, and the second one makes us sorry we laughed the first time. There are inexcusable typos, such as the misspelling of writer Jerzy Kosinski&#146;s name. Several of the later chapters seem inexplicably underwritten and dashed-off, suggesting Heller didn&#146;t have the opportunity to sharpen or rewrite portions of the book before he died. In his best work, Heller&#146;s punch lines are like vaudeville spotlights illuminating our crushing fears and petty behaviors. If not in the same league as Samuel Beckett, he certainly shares a similar banana-peel nihilism. At one point, Eugene Pota quotes the famous line "I can&#146;t go on, I&#146;ll go on" from Beckett&#146;s The Unnamable. Although Portrait of an Artist, as an Old Man has the jokes and the despair, they seem to cancel one another out instead of combusting into a sublime portrait of human futility. The multiple story lines immerse us in wretchedness without exploring its heartbreak, and the one-liners dissipate our empathy.

There are a few brief moments in which we glimpse the plaintive eloquence that too often eludes Heller throughout the novel. Pota visits two of his former lovers, both of whom suffer from crippling ailments, one woman has severe burns from a boating accident, and the other has contracted Lou Gehrig&#146;s disease. Amid jokes about blow jobs and the fervent sexuality of years long gone, Pota&#146;s sorrow finds its core of emotional truth. Adele, the ex-lover with ALS, asks Pota to sit beside her:

He rose stiffly and crossed the room to join her on the sofa. She extended an outstretched arm to steady him as he turned to seat himself, and he came to rest with his hand inside her thigh. He squeezed gently, rubbing a bit, and left it there. She stared down at his hand for moment. Then, turning in toward him, she reached her arms around his shoulders, and as they settled together against the backrest, she began weeping noiselessly, making not one sound, spilling tears against his neck that felt ice cold.