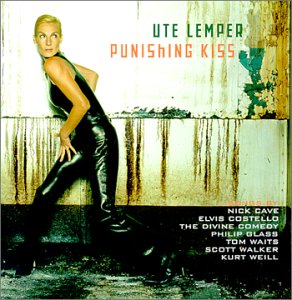 . Ute Lemper’s is, sometimes, not an easy talent to love. Ever intense, she makes considerable demands on both herself and her audience and her performances often seem short on humour. Punishing Kiss takes the singer away from her accustomed recorded milieu of Weill and Berlin cabaret songs into new territory; most of the numbers are by contemporary writers like Tom Waits, Evil Costello and Nick Cave.

The results are mixed. Cave’s "Little Water Song" is an extraordinary narrative of a woman being drowned by her lover. Lemper’s passionate take on the lyric holds the listener spellbound until the final chilling line: "I glow with the greatness of my hate for you." She also does well with the contributions of The Divine Comedy’s Neil Hannon and Joby Talbot. A trio of songs include "The Case Continues," a woman’s complaint at being dumped by her lover over the phone. Joby Talbot’s swirling string arrangement is thrilling although Lemper’s unremittingly serious approach lets her down somewhat when she fails to make the most of rueful lines like "If sex were an Olympic sport we’d have won the gold."

Hannon joins her on the excellent "Split" as a man driven to maudlin self pity by the lover who has betrayed him. They also duet effectively on a resolutely updated version of Weill’s "Tango Ballad." Ironically, Lemper is more effective here than on some of her "authentic" Weill recordings. She exhibits a nice sense of irony on this sordid but strangely romantic tale of a whore and her pimp remembering their association with a degree of affection which seems to surprise even themselves.

While Lemper lightens up a little for Elvis Costello’s "Passionate Fight," a surprisingly pretty pop tune which might or might not be about an S&M relationship, she remains resolutely dour on the same writer’s "Punishing Kiss." Consequently she misses the humour – and with it the pathos – of a woman who spends her empty days watching soap operas. She also fails to add much to a pair of Tom Waits numbers and the final track – Scott Walker’s "Scope J" – begins promisingly but soon becomes almost unlistenable as it succumbs to both the writer’s and the performer’s worst excesses.

Punishing Kiss will undoubtedly appeal to Lemper’s established fans and it may even attract a few put off by her misguided assaults on Sondheim and the repertoires of Dietrich and Piaf. The bulk of the songs are excellent, with strong melodies and intriguing lyrics which reward repeated listening. Lemper uses her dark, brooding voice to great effect throughout but one still cannot help wishing she would take herself a little less seriously and enjoy her talent a little more. She seems unable to resist letting her audience know how demanding performing is. Her unwillingness to shield us from her efforts is ultimately slightly alienating and detracts from her undoubted skill and commitment to some fascinating material.