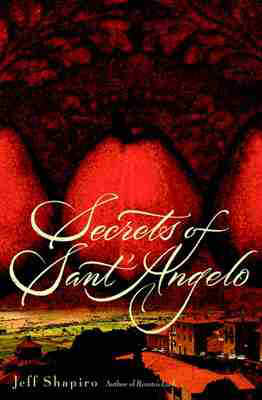 Set in a storybook vision of rural Tuscany, Jeff Shapiro&#146;s second novel, Secrets of Sant-Angelo, weaves its narrative way gracefully, partaking of operatic drama, rustic idyll, children&#146;s story, psychological thriller and philosophical meditation. Nestled in the mountains on a secondary rail line, Sant&#146;Angelo is inhabited by not so simple townsfolk, a lively cast of memorable characters who each actively struggle with the larger questions of good and evil, appearance and reality. Their passions and Shapiro&#146;s plotting of treacheries echo distantly Puccini&#146;s opera, Tosca (Tosca threw herself off the castle of Sant&#146;Angelo in Rome), evoking the heights and banalities of the Italian operatic tradition.

As the novel opens, the townsfolk&#146;s collective mood and luck mirror the weather–never-ending rains give way to a portentously cold and snowy winter. Ttownsfolk suffer all sorts of private misfortunes; some believe they have been cursed. The pious in particular seem convinced sfortuna (bad luck) has taken up residence in their lives. Into the scene of a domestic spat between single mother Petula (whose father is the title subject of Shapiro&#146;s first novel Renato’s Luck) and her partner, Daniele, the resentful and volatile owner of the train station bar, come two outsiders: sunny, busty Rosa Spina (&#147;thorny rose&#148;) and her disquietingly somber, charismatic, faith-healer son Emanuele Mose.

The pair quickly get to work, mesmerizing many of the townsfolk and offering fresh fodder for the gossip mill. Soon illusions are spun and the certitude of reality no longer seems what it once was. The pair are really only catalysts for the magic transformations of real life. Capelli, the simple laborer soon falls in love with Rosa Spina. The village priest is at war with Emanuele Mose. Na�ve widows are conned, people are mysteriously hurt or killed, gossip and bad luck spread deeper. Danger lurks everywhere. As Il Piccino, the Jewish dwarf newspaper seller observes about Rosa Spina&#146;s son, &#147;’Crazy is the sheep who confesses to the wolf.’ You understand?&#148;

Miracles occur as well. Rosa and Son&#146;s cozy arrangement is upset almost from the start when a heretofore unmentioned twin brother, named l&#146;Altro (&#147;the other&#148;) turns up, freshly released from prison. True to the classic Romantic tradition, l&#146;Altro is everything his brother is not&#151;a free spirit, voluptuous, dangerous with his ideas, his desires, his murky criminal past. He is indeed, in some way, each villager&#146;s dark shadow other side. As he comes between his mother and brother, between Petula and Daniele, and between others, he embodies the philosophical contradiction which this novel explores — the &#147;Law of the Excluded Middle.&#148;

The unshakable foundational Western belief in binary vision will have everything as &#147;either/or,&#148; &#147;&#146;A or not-A,&#146;&#148; as l&#146;Altro explains. (In this, he points out, Jews and Christians are one.) Something is right or wrong, good or bad, true or false. Legerdemain, every sort of conjuring succeeds to the degree that people see in either/or terms, even when the truth is plainly in front of them.

As Shapiro spins out one excluded middle after another, the enchantment of reality arises in the pages of Secrets of Sant&#146;Angelo. In his second novel, Shapiro more than fulfills his promise as novelist. As the story closes, with some secrets revealed, Shapiro casts another spell upon his readers. What new secrets await these angel messengers half way up the mountain, in the excluded middle, between heaven and earth, between reality and imagination?