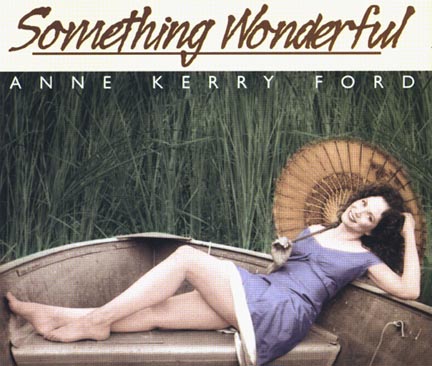 Anne Kerry Ford is a relative newcomer to the cabaret scene, having made her debut as recently as 1996. A graduate of The Juilliard School of Drama, she has worked extensively as an actress and appeared on Broadway in Annie (as Grace Farrell) and The Threepenny Opera. Her second CD is based on a show she first performed in August, 1997 and pays tribute to the work of Stephen Sondheim and his mentor, Oscar Hammerstein.

Ford has a fresh, pure soprano voice which she uses intelligently to present her material in a warm and straightforward manner. She clearly has a great affection for these songs and presents them with little embellishment in subtly clever arrangements by John Boswell. With material as familiar as this, there is a temptation for singers to feel they must always be looking for a different slant or a clever new setting for every number. In fact there probably aren’t too many different ways to sing The Miller’s Son or Edelweiss. Ford recognizes this and has the wisdom simply to find the right character for each piece and then let the melody and lyrics speak for themselves.

One of the album’s highlights is a delightfully wistful reading of All Through The Day. Ford’s delivery of the bittersweet yet essentially optimistic Hammerstein lyric is set, in Boswell&#146;s accompaniment, against the instantly recognizable melody of Sondheim’s Losing My Mind. The effect is to create magical new layers of meaning as the listener recognizes what the singer, perhaps, does not – that the simple pleasure she takes in waiting for her lover to return can only last as long as her absolute certainty that he will.

Ford colors her voice effectively to suit the mood of each song – youthful and eager on Something’s Coming, it takes on altogether darker tones for a tender Something Wonderful. Her Being Alive is unusually restrained and, while she misses some of the bleakness of the lyric (but alone is alone not alive…), it’s note of patient, self-contained sadness is certainly effective.

A few of the interpretations fall a little short of the mark – her Bill is pleasantly self-mocking but misses the underlying note of real tenderness – but these songs are old friends and Ford’s gently perceptive readings make for highly pleasurable listening.