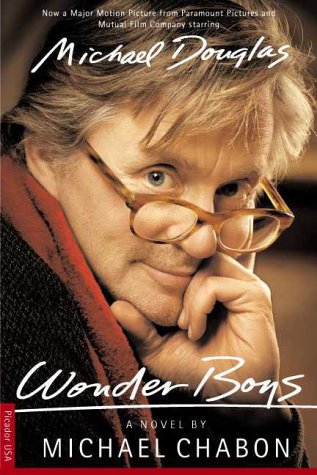 Michael Chabon&#146;s luminous 1988 coming-of-agenovel, The Mysteries of Pittsburgh, was one of the auspicious literary debuts of the last dozen or so years. Written in an assured and full-throated lyrical voice, the book began life as an MFA thesis and was published to critical acclaim and bestsellerdom when Chabon was only 24 years old. He then spent the next five years assiduously working on an epic second novel titled Fountain City. After completing some 1,500 pages, he came to the realization that the book was going nowhere at all, and he regretfully abandoned it. As devastating as the loss of five years&#146; work must have been for Chabon, we can be thankful that the experience led him to write – in a mere matter of months – the enchanting book that became his "official" second novel, Wonder Boys, published in 1995.

Perhaps it&#146;s no small coincidence that Grady Tripp, the narrator and protagonist of Wonder Boys, is a novelist with a chaotic unfinished manuscript of 2,611 pages. Tripp, however, is a generation older than Chabon (who was 31 when Wonder Boys was published) and still has one foot in the 1960s and one hand on an ever-present "fatty" of marijuana. He teaches fiction writing at a Pittsburgh college. Seven years ago, Grady Tripp wrote a successful novel that won a PEN award. Since that time, his life and art have somehow managed to spiral beyond his perceived control. Tripp describes his appearance glimpsed in a barroom mirror: "an overweight, hobbled, bespectacled, aging, lank-haired, stoop-shouldered Sasquatch, his furry eye sockets dim, his gait unsteady…"

The narrative that Tripp relates for us is a series of steadily mounting crises that force him for the first time in years to confront the dissipation that has overtaken his mind and body. On the eve of a college-sponsored writers and publishers weekend known as WordFest, Tripp&#146;s wife walks out on him, and he learns that his mistress, Sara Gaskell – who also happens to be the chancellor of the college – is pregnant with his child. Adding comic insult to injury, Tripp finds himself partnered in crime with one of his students, a macabre and suicidal young man named James Leer, who has shot and killed the chancellor&#146;s dog and stolen her husband&#146;s prized Marilyn Monroe collectible, a jacket worn by the starlet on her wedding day to Joe DiMaggio.

Marilyn Monroe&#146;s jacket ends up in Leer&#146;s knapsack, and the dog&#146;s corpse ends up in Tripp&#146;s automobile trunk, along with a tuba belonging to a transvestite who has arrived in town with Tripp&#146;s eccentric friend and editor, Terry Crabtree. Still later, Tripp will accidentally drive over a nine-foot boa constrictor belonging to his in-laws. The boa&#146;s carcass, too, will be added to the trunk. In a climactic moment, Tripp will deploy the dead boa like Indiana Jones&#146;s bullwhip and disarm a pistol-packing gangster.

The foregoing inelegant synopsis highlights the fact that Michael Chabon is not afraid of rude and outsized slapstick comedy. What the synopsis doesn&#146;t convey is Chabon&#146;s poetic voice, his literary gift that transforms Wonder Boys into an intoxicating love affair with the English language. Here, for example, is Tripp&#146;s description of the greenhouse behind Sara Gaskell&#146;s home:

I smelled potting soil and freesias, basil and rainwater, rotten wood, rubber hoses, moss, and a faint chlorine tang like an indoor pool. A thousand plants stretched out into all four arms of the greenhouse, spread across low benches, in orderly rows, sporting all manner of fronds, tendrils, and bracts, from cacti and miniature roses in pots to boxes full of tiny seedlings to a big round gardenia in a Mexican urn. The back part of the greenhouse was hung with fluorescent lights that cast their wide spectra over planters filled with zinnia, alyssum, phlox, and over a box of sweet pea vines that Sara had trained to climb through the empty mullions of a salvaged French door. In the central atrium, in a terra-cotta pot the size of a Volkswagen Beetle, stood a six-foot date palm, and beside it a worn purple davenport crowned with a bunch of carved grapes.

This hothouse teeming with vegetation thrives in the midst of a Pittsburgh winter. Similarly, a prospective newborn life blossoms in the warmth of Sara Gaskell&#146;s womb. Chabon doesn&#146;t overplay this thematic metaphor, yet as Grady Tripp extravagantly renders for us the sights and smells of Sara&#146;s greenhouse, we can sense the salvation that Sara represents for him. At the same time, we are made aware that language is itself a rejuvenating force for Grady Tripp in his journey toward rebirth as a novelist.

Chabon is the most reverent of irreverent comic writers. Even casual readers should recognize the biblical allusions to the sensuous "Song of Solomon" in the greenhouse description. On a more overt note, Chabon&#146;s novel includes a long set-piece – nearly 30 pages – that depicts a lovingly detailed Passover Seder dinner at the home of Grady Tripp&#146;s Jewish in-laws. Never mind that Tripp is a lapsed Protestant, or that his marriage is in the process of going to hell, the ancient traditions are for the moment observed and a semblance of spiritual grace seems to touch these precarious lives, including the lost soul of young James Leer.

Wonder Boys is eloquent on the subject of writers losing their way, of the creative process turning sour and self-destructive. Tripp has come to think of writing as the "midnight disease," a kind of ghostly insomnia that afflicts authors too long immersed in the solitude necessary for their work. Several characters in Chabon&#146;s novel share a fascination with a mythical author named August Van Zorn, a writer of pulp horror stories who eventually put a bullet through his head when the market for his lurid stories began to dry up. (Chabon has gone as far as to pen a sly and creepy horror story under Van Zorn&#146;s name, which is included in Chabon&#146;s 1999 short story collection, Werewolves in Their Youth.) Then there is a young writer like James Leer, who is so determined to court darkness that he can find it anywhere, even in the films of Frank Capra, whose name Leer has carved into the flesh of his hand with a needle. Leer will discover a measure of redemption in a book contract and a homosexual fling, both proffered by Tripp&#146;s lascivious editor, Terry Crabtree.

If Wonder Boys lacks the lean precision of Philip Roth&#146;s The Ghost Writer, or the intellectual pedigree of Saul Bellow&#146;s Humbolt&#146;s Gift, it is certainly the equal of John Irving&#146;s antic and brilliant The World According to Garp. Like Garp, Chabon&#146;s novel risks both silliness and sentimentality, and succeeds as a manic celebration of the American literary spirit.