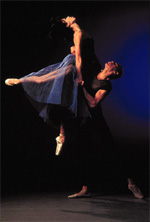 If ballet were handwriting on a wall, Balanchine&#146;s choreography would look like that of an industrious A student, and the choreography of Alonzo King that of a madman. While Balanchine was thought to be contemporary in his day–abstract, revolutionary–Alonzo King and his San Francisco-based troupe, Lines Ballet create a body of work that is so strikingly modern and original, it&#146;s hard to call it ballet.

In this program. King demonstrated his genius for creating a highly idiosyncratic departure from the classical idiom. King&#146;s use of music and phrasing are the main changes, but even the way his dancers approach movement is unique&#151;never for a moment is there the classical sense of illusion, weightlessness, air. With Lines, the dance is about speed, danger, dynamics and endurance. Romanticism is replaced with something that represents the world today, rapid-fire motion and violence.

In Koto, a 5-part ballet choreographed in 2002, Maurya Kerr opens the piece by dancing with a stick. In typical King fashion, the stick is more weapon than partner and the sight of her breaking out of disjointed phrases of movement to swing the crooked stick with all her might were a masterful way to introduce the viewer to the kind of intensity to expect. The entire company, Kerr, Tanya Wideman-Davis, Lauren Porter, Chiharu Shibata, Corinne Larsen Haas, Brett Conway, Prince Credell, Gregory Dawson and Xavier Ferla is muscular and virtuosic. Every one of them is a soloist in the work; intentionally, even unisons are designed at such break-neck speed as to be irrelevant. The pointe-work is uniformly masterful by the women, and overall, the attack, confidence and commitment by these dancers to this work sets them apart from almost any other ballet company. Like Balanchine&#146;s home company, these dancers have the rare opportunty to work with one master in depth.

Alonzo King has been invited to set works on many of the major companies of the world, including Frankfurt Ballet, Alvin Ailey American Dance Theater, and Joffrey Ballet. Only the swiftest, strongest, most fearless dancers would be even remotely capable of pulling off one of his ballets. In terms of programming, however, the impact of one King Ballet on a program of other works has got to be stunning. The problem on an all-King program, such as that on the Lines company&#146;s fall season, is that there’s nothing to compare it with, so, after a while, all the wildness begins to look like status quo.

There are challenges to this work. Like many modern dance choreographers, King apparently choreographs phrases independently of music. You can&#146;t imagine that there could ever be counts or even beats, which is why unison dancing becomes so challenging. Neither the dancers nor the audience have any musical structure to rest in. And occasionally, rest is good. A typical King movement phrase involves a dancer (or dancers) walking onto stage then launching themselves into a furious series of amazing moves. For women, there is always an interesting use of the pointe shoes; for men, the most exciting leaps and quadruple pirouettes, ending in, say, a parallel contraction or one legged contortion or some other non-"graceful" moment.

Within the phrases there are changes in dynamics, turns that slow down, gentle journeys to the floor and back, moving combinations that get faster and faster and faster, then studdenly stop. Another layer of complexity to this choreography is the detailing–quick flicks of a foot, an arm that reaches diagonally across the body, a head that tilts or attack that looks suddenly triumphant, or submissive or taunting.

The musical selections for King&#146;s works are alternative, non-linear or metric in many cases, like the dancing. Koto featured an original score for that instrument (played live by the composer) by the distinguished experimental composer Miya Masaoka, who was visible as a ghostly, floating presence somehow suspended at the upstage boundary of the playing space. Her piece offered its own mood and dynamics, but the choreography didn&#146;t seem to reflect any Asian influence, it was more a sense of the intricacy and speed, the plucking quality of the traditional Japanese instrument related somehow to pointe shoes and the quirky disjointedness of the dance pharases.

Splash (2002) featured a sound score of excerpted music by Nino Rota, Francis Poulenc and Leslie Stuck. This duet, for Jacoby and Credell, was more whimsical, with partnering that seemed to imply a splash of color rather than water, swimming, ocean.

Stealing Light (1986) seemed almost romantic. Barber&#146;s Piano Concerto Opus 38 offered the lushness of strings and orchestra. Lighting here, by Michael Mazzola, created striking pictures, as Laurel Keen emerged from the passionate partnering of Brett Conway to dance into a sidelight that looked like her future, alone. Rarely does theatrical lighting play as big a part as for the dancing in a ballet, but this piece would be unimaginable without the movement from shadow to starkness that Mazzola created for the piece.

Finally, Szymanski&#146;s Vibraphone Quartet, a world premiere, featured a commissioned score by Pawel Szymanski: "Compartment 2, Car 7," played by musicians from the San Francisco Chamber Orchestra. Here was music that was academic and bleak, modern in the "difficult" sense. King&#146;s choreography offered five parts for soloists and the full company; there were moments of excitement, virtuosity and much of the same interesting kinds of phrases that had been seen earlier. Nothing new seemed to come out of the collaboration here, the music offered little possibility for catharsis or even connection, either to the dancers or the audience. Movement this good and dancers this great can get away with 20 minutes of pure dance, but the point of the new piece, and the reason for this music, was frustratingly enigmatic.