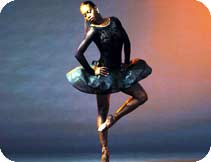 With four world premieres making up his spring season, choreographer Alonzo King was up-to-speed in some ways, creating some strikingly fluid, original-looking movement for his LINES Ballet. On the whole, however, it looked like he had run out of rehearsal time and bitten off more than he could chew, creating neither a particularly effective Rite of Spring or much more than sketchy entertainment in his tributes to Coleman Hawkins&#146; music and to Josephine Baker. Only The Patience of Aridity, Waiting for Petrichor, a group piece with music by two composers, Miguel Frasconi and Edgar Meyer, made much of an artistic impact.

Rite of Spring, with the powerful music composed by Igor Stravinsky in 1913 for Diaghilev&#146;s Ballet Russe, employed an expanded cast (the extras looked like strong student dancers) and filled up the stage with wild, weighty choreography and more than the usual attention to narrative, The dance traditionally depicts, shall we say, primal urges, including the ritual sacrifice of a young woman to insure a good harvest. For all his famous collaborations with musicians, King has never been one to believe in placing steps squarely on countable beats. Here, for some reason, he decided to move in that direction.

In fact, however, his loosey-goosey, every-dancer-for-himself phrasing and strictly disobedient musicality has always set him apart from other ballet choreographers. Here, an urge to hit musical cues and create unison dancing seemed inspired by the gut-wrenching power of the Stravinsky score, but the resulting choreography mostly looked sloppy. King&#146;s dancers are well-re-trained to go off on wild tangents in typically super-complex phrases, but the unisons needed to be either simplified or drilled. Stravinsky may have been too strong a competitor for King&#146;s talents, which come from playing with form. It was kinetically exciting to have 25 dancers filling the stage with a flailing ardor, but the dance itself resembled old-fashioned modern more than anything cutting edge.

Coleman Hawkins Love Song from Apache and Baker Fix (includes "Haiti," "Toc Toc Partout," and "J&#146;attends votre retour") were also departures for the LINES company. A pair of pas de deux, they were, for some reason, combined into one continuous dance. Coleman Hawkins&#146; delicious sax created potential for some slinky dancing, and, indeed, this dark, smoky world looked just right for two (Chiharu Shibata and Prince Credell). Instead of developing some kind of relationship however, the dance had Shibata as the object of desire and Credell, nearly invisible with black skin and black costume on a black stage, merely the assistant, not a lover.

The Josephine Baker tribute included recordings of Baker herself, and costuming to represent her stage personae and Parisian chicness. But the dance itself, three solos for Maurya Kerr, Lauren Porter Worth and Kerr again, was as short and insignificant as were the songs. Costuming was more interesting than choreography. When Kerr danced with physio balls it seemed as if King had simply run out of ideas. It was a show bizzy, fashion-show dance, ballet in the worst sense, and it didn&#146;t seem to shed any light or love on its subject, the exotic pioneer of early-20th Century dance.

The Patience of Aridity, Waiting for Petrichor, like the inexplicable title, was really two dances. The first, a series of solos and duets to a cello score by Miguel Frasconi, was filled with sleek, interesting King movement. The gem of the entire evening was the second dance, however, a pas de deux to a romantic violin concerto by Edgar Meyer. Here was dancing with a delicate and beautifully realized completeness to it, a perfect ending after a spate of cooler, bleaker choreography to the Frasconi. John Michael Schert, the newest company member, arriving in San Francisco via New York and a couple of years with American Ballet Theatre, was paired here with Laurel Keen, and the two created a moving depiction of tender union, while never giving up their expressive individuality. If only the rest of the evening could have risen to this level.