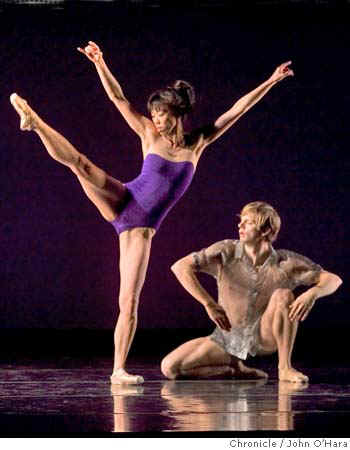 Alonzo King offered a world premiere and a bit of fluff at his spring season opener in San Francisco, but the strongest effect was made by a 1997 piece, Three Stops on the Way Home. Satoh, the premiere, featured the austere music of Japanese composer Somei Satoh, whose compositions are influenced by Shintoism and Zen Buddhism. The musical/spiritual essences of the Satoh piece– a feeling of simplicity, purity, the infinite and the timelessly static (to paraphrase the program notes) are clearly picked up on by King. That is part of the problem. King&#146;s brand of brainy and austere choreography can get monotonous without musical texture upon which to hang one&#146;s emotions. Here, the lovely sounds created for violin and harp (played beautifully by David Abel and Lynn Taffin) are tone-oriented, long sequences of single notes, with a lack of any rhythmic underpinning. The dancing, a series of phrases for two couples and a transitionary female soloist, are all beautiful and esoteric. As in meditation, you become absorbed in self-absorption. But you don&#146;t walk away remembering any of it.

John Michael Schert, a former ABT dancer who has been with the LINES company for a couple of seasons now, illustrates the kind of dancing that makes watching them fascinating. Schert has a soloist&#146;s phrasing, he fills out movements slightly longer than called for, makes them slightly fuller and more interesting for it. During the few moments when King offers his dancers in unison, something which is nearly impossible because of the density and weirdness of the phrases, Schert is the one who most refuses to blend in, to hurry to join the shorter dancers, who are typically faster to the finish. This may have been the bane of Shert&#146;s existence at ABT, but here, he is in his element. Alonzo King is all about self-expression, not some perfection in homogeneity typically associated with the ballet.

Three Stops on the Way Home was a brilliant success because of the dance, but also because King found a perfect soul-mate in majestic jazz of Pharaoh Sanders. A recorded masterpiece for tabla, synthesizer, sax, gongs, harp, cello and French Horn (to name a few of the instruments), the music washes over the stage in waves of sound that make all the abstraction on stage look simpler, almost inevitable. What other kind of dance could go with music like this? Chiharu Shibata gets manipulated by Brett Conway, Schert and Gregory Dawson (who adds muscle to the movement of King in a distinctive and winning way), Drew Jacoby and Laurel Keen have an extended section in choreographic cannon, which makes you appreciate the angles and design of the choreography, and when the whole company comes on for the last movement, a strange kind of bliss, chaos under control, takes over the stage, creating moments that are, finally, unforgettable.

A curtain-opener, Odd Fellow was a strange attempt at humor by King. Dancer Brett Conway played a sort-of Jerry Lewis doofus, as a chorus of others proceeded to dance a more typical King piece. The "serious" moments for the group were interesting, and Conway&#146;s fooling-around was interesting as a satirical take on the choreographer&#146;s tendencies. Still, it wasn&#146;t funny.