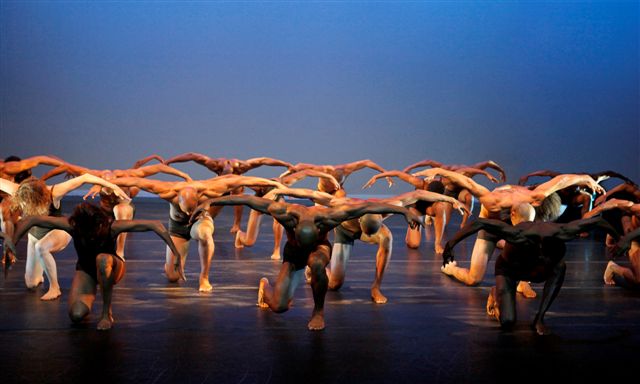 Want your soul rocked? Well, a night with the Alvin Ailey American Dance Theater will do the job just fine.

It was intended to be a celebration of Judith Jamison, in her 20th and final year as company director but Program C of the annual week-long Berkeley residency of the troupe essentially was an extended homage to the late founder. The spirit of Ailey infused every piece, although two of them were choreographed by his hand-picked successor and protégé. Jamison’s choreography picks up where her mentor’s ended. It is high-kicking, sinuous and athletic and the talented members of the troupe perform it with brio.

The first piece, made in 2004 with Robert Battle and Rennie Harris, was inexplicably entitled “Love Stories,” although the only love story in evidence was Ailey’s devotion to his company and the dance. His taped voice punctuated a recorded high-energy percussive score by Clarence Paul-Henry Cosby. The piece opened, however, with a terrific male solo, performed by Kirven James Boyd to a Stevie Wonder song. The dance was dynamite; the song didn’t seem to go with it. Following that, the company drifts in, dressed in rehearsal clothes, the members seeming to warm up before a class. There is a long samba, first for a female trio, then various combinations, before the final “Clap Your Hands.” The whole thing shows off the athletic, sassy and attitude-laden abilities of this talented troupe, even if one is left wondering what it all was about.

“Hymn,” a dance with recorded narration by the famed actress/writer Anna Deveare Smith, is an adaptation of Jamison’s 1999 Emmy Award-winning “A Hymn for Alvin Ailey.” Smith interviewed various members of the company about dance, Ailey, Jamison and their own lives and some of the dancing simply is accompanied by her voice, relating their responses. Other segments are set to the music of Robert Ruggieri and great lighting effects by Timothy Hunter set each scene. This is a piece that involves the entire company, with participation by veterans Clifton Brown, Renee Robinson and Matthew Rushing, as well as striking solo and ensemble work by newer members of the troupe.

Early on, we see the dancers mourning at the founder’s funeral, which is likened to that of “A Head of State,” the actual title of the segment. A solo by Glenn Allen Sims accompanies Jamison’s own confession of unspoken love for her mentor. Guillermo Asca leads a powerful “Survivor,” a tale of a bomb scare in the theater which is about fear and terror but ultimately about the courage to go on. This is followed by “Cathedral,” a gorgeous pas de deux for Rosalyn Deshauteurs and Brown. “Black Dress,” wittily danced by Linda Celeste Sims, expresses admiration and awe on the part of a novice upon first meeting, then working with Jamison. Yusha-Marie Sorzano dances the story of a girl from Senegal who, when she goes back to Africa to visit her family, must learn to remove the protective “Mask” she wears in New York. At the end, Boyd delivers a powerful “Message” about the beauty to be found in ugliness. It is a fascinating theater piece.

What is to say about “Revelations,” Ailey’s 40-year-old masterpiece, that hasn’t already been said a hundred times (at least ten of them by this writer)? It is the omnipresent signature, both of the company and its founder and long may its banners, fans and fluffy parasols wave. The miracle is that the dancers, who must be as sick of it as I am, manage to keep it fresh and infused with energy night after night. It might be time to give the venerable gospel piece a rest – except for the fact that the audiences love it and, even a jaded critic found herself soul-clapping along with the inevitable reprise of “Rocka My Soul in the Bosom of Abraham.” Some things never change. Maybe they shouldn’t.