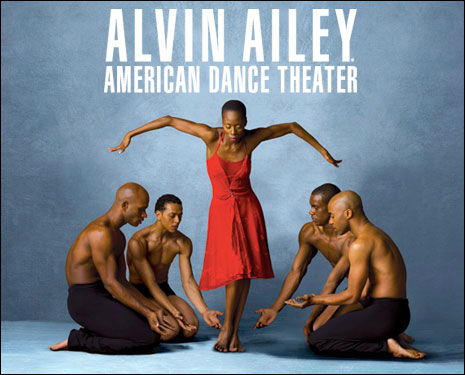 There ain&#146;t much ailing the Alvin Ailey American Dance Theater these days. In fact, the venerable troupe, directed by former lead dancer Judith Jamison since the founder&#146;s death in 1989, is looking better than ever. The opening program of a week-long residency at Cal Performances&#146; Zellerbach Hall in Berkeley mixed in some new work with company standards to show off the technical virtuosity of these remarkable dancers.

A revival of &#147;Night Creature,&#148; an excerpt from the 1974 &#147;Ailey Celebrates Ellington,&#148; looked freshly minted &#150; sexy, jazzy and more Broadway than ballet, especially in the opening section. In the words of the Duke, himself: &#147;Night creatures, unlike stars, do not come OUT at night &#150; they come ON, each thinking that before the night is out he or she will be the star.&#148; And each one of these very cool cats, led by Dwana Adisha Smallwood and Vernard J. Gilmore, could be a star. In the glitzy beginning, the stage fairly oozes with attitude. The second section is more balletic, beginning with a group dance characterized by sinuous moves that make it look as though these people don&#146;t have a bone in their bodies. The finale is something more primal; a frenetic dance of diagonal arms and legs and jutting hips, ending in a minor key.

A hard act to follow? Don&#146;t even think about it. Hans van Manen&#146;s &#147;Solo,&#148; commissioned by the Ailey troupe in 1997, is an athletic, often hilarious, study in machismo or upmanship or &#147;Anything you can do, I can do better.&#148; With a lift of an eyebrow or a shrug of a shoulder, a dancer will dismiss another&#146;s work or put down his own and it&#146;s pretty funny as well as exciting to watch. Set to an intricate Bach violin piece, &#147;Solo&#148; pits three men (Clifton Brown, Glenn Allen Sims and Matthew Rushing) against each other, first in solo and then in groupings. Van Manen, who is the artistic director of the prestigious Nederlands Dans Theater, precisely translates the music into motion, much as American choreographer Mark Morris does. His choreography in this piece is quirky and demanding, with pyrotechnical displays of leaps and gyrations. As the music picks up speed, so do the dancers until it ends with them all whirling in unison. And all friends again, after all. The only winner is the audience.

Ronald K. Brown&#146;s &#147;Ife/My Heart&#148; is an even newer work, created on the Ailey company just last year and having its West Coast premiere at these performances. The title, taken from the Yoruba language, means &#147;my heart, the way God loves me&#148; and has a loose program of seeking and finding spiritual redemption. It may begin with a group prayer and a feeling of fearful questioning but it soon moves into sheer exuberance, with white clad dancers strutting their stuff against a red background. The feeling and the look is rather like Ailey&#146;s &#147;Revelations&#148; and it is possible that we are watching an homage. Drums, a powerhouse poem by Nikki Giovanni and various African rhythms and melodies bring the dancers through push-and-pull confrontations, disjointed movement contrasted with stillness, into a ritual frenzy set to Ursula Rucker&#146;s story-song &#147;Release.&#148; It was mesmerizing.

More old-time religion to close the night: &#147;Revelations,&#148; what else? Ailey&#146;s 1960 masterpiece has become the signature of this troupe, so much so that it ranks right up there with &#147;Swan Lake&#148; in a dance reviewer&#146;s &#147;most often seen hits&#148; list. This time around it may have new lighting and redesigned costumes but it isn&#146;t all that different from when Jamison herself went &#147;Wadin&#146; in the Water,&#148; that white parasol held high in her hand. It is a wonderful piece, an obvious crowd-pleaser and suffers from only one flaw &#150; overexposure. With so much fine work in the repertoire, perhaps they could give it a rest for a while.