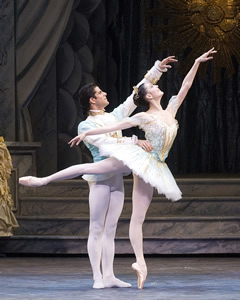 ABT’s spring Metropolitan Opera House Season affirmed once more that the company is abundant with talent, if hungry for solid new repertory. The new production of The Sleeping Beauty (by Kevin McKenzie, Gelsey Kirkland, and Michael Chernov) showcased the ballet’s incredibly challenging title role. Veronika Part handled it well in the production’s premiere (after a prior shaky gala excerpt) with weightless developpes and solid balances in the devilish adagio; Marcelo Gomes played her prince — gallant, devoted, perfect as usual. Diana Vishneva, a more coquettish Aurora, was paired with David Hallberg, though they didn’t seem to mesh. Gillian Murphy, subbing for Julie Kent, was of course technically reliable, but she is an increasingly lustrous and relaxed stage presence. She danced with her real-life prince, Ethan Stiefel, whose return to full form was truly welcome after injuries and rehab. But the cartoonish design and garish palette (sets by Tony Walton; costumes by Willa Kim) undermined a true sense of elegance, and an emphasis on the fairies grew tedious through the final scene. As the Lilac Fairy, Michele Wiles gave a forceful performance, although her flight in a harness robbed her of well-earned dignity. And while it is a substantial role, it underscored the difficulty the statuesque Wiles is having being incorporated into the rotation of lead roles, and not simply Amazon roles.

The company revived Lar Lubovitch’s Othello, not particularly well received when it premiered in 1997. But since then, ABT has little to show in successful full-length commissions. In light of that, Othello has much to offer now– a passionate, tragic Shakespeare underpinning, fierce male roles to suit this company’s great men, and Lubovitch’s lyrical choreography, particularly skillful in duets and crowds. While the role wasn’t built on Gomes, he inhabits it. Kent (the only company member to have performed this ballet previously) danced Desdemona with a blend of sang-froid and fragility. Hallberg’s innate nobility endows him with an hauteur suitable to Othello; playing Desdemona across from him was Murphy — a bit strong, but satisfying in the role. The neat sets by George Tsypin are in part composed of what appears to be slabs of glass, representative of strength and fragility; plus projections by Wendall Harrington. A double bill blended the academic and romantic: Balanchine’s Symphonie Concertante seemed to be included as proof of the company’s technical chops, and Ashton’s The Dream offered whimsy to balance it out. Vishneva and Angel Corella made a playful pair, with Craig Salstein and Julio Bragado-Young adding levity and verve.

The balance of the season comprised classic full-length fare. Kenneth MacMillan’s Manon was a welcome inclusion because it is less familiar to New York audiences, and the lead role is a refreshing variant on the pitiable princess variety so prevalent. Julie Kent was surprisingly moving in the role; her porcelain façade working particularly well in a hypnotic scene in which she is passed from man to man, her feet rarely touching the floor. Alessandra Ferri danced it with guest artist Roberto Bolle, whose physical ideal can only be improved with a bit more depth of acting and less visible strain to perfect technique. Ferri’s heart-on-the-sleeve approach emphasized the impetuosity of Manon, who wants what she wants. Sadly, Ferri retired at the end of the season. Those legs and feet will be sorely missed, although there’s always Hallberg and Herrera.

Even though they’re not exactly news, what would an ABT season be without Swan Lake and Romeo and Juliet? They epitomize romanticism and passion and all that’s great about ballet; the scores alone are worth it. The dual role of Odette/Odile is one of a ballerina’s great challenges. Diana Vishneva, this season’s “it girl,” looked technically overwhelmed, but veteran Nina Ananiashvili handled it with brio and command, and her rippling arms are simply a wonder. Angel Corella toned down his exuberance to suit the Prince; Gomes filled the role physically and emotionally, as he perpetually does. After Herman Cornejo and Xiomara Reyes performed Romeo and Juliet’s balcony pas at the season opening gala, I’d hoped they’d be cast in the full-length ballet; sadly, they were not. Corella and Vishneva made for a passionate pair, and Hallberg and Murphy, who worked together frequently all season, offered poeticism alongside their physical ideals.

They also paired in Cinderella, which closed the season, giving a zesty performance that showcased Murphy’s astoundingly centered turns and Hallberg’s perfect grand jetes. (Actually, it’s a treat just watching Hallberg walk, leading with his insteps, which need to be encrusted with jewels.) The season’s toll was visible not so much in the lead performances, but in some seriously ragged secondary male roles, atypically for ABT. Gomes and Kent offered a more mature rendering, although Kent’s translucency worked the wrong way here, diminishing her presence rather than enabling her to transcend a physicality as she did in Manon. Kudelka’s ballet, which despite a general flatness of staging and uninspired ballet vocabulary, has a number of entertaining scenes, in particular when the prince and his entourage search the world for Cinderella. The dance is set free as the stage is unencumbered by the flotilla of furniture often onstage, and simple projections set the mood of each scene. Unfortunately, in the party scene, the dark background renders the black-clad company difficult to see. The stepsister roles gave the normally elegant Maria Riccetto and Marian Butler the chance to really ham it up, alongside vampy Carmen Corella and the lyrical and flexible Kristi Boone, who was promoted to soloist.

Another new soloist is Jared Matthews, who made a convincing case for his promotion. He seemed to be in every performance I saw in secondary roles, and received extra notice when he portrayed Von Rothbart (Swan Lake) with an impressive wicked panache. Misty Copeland is his female counterpart in both ubiquity and new rank; her striking curvaceous lines and crisp technique are evidence why. Craig Salstein was a joy to watch all season as he commits every ounce of energy he has to each role. Sascha Radetsky handled his many evil roles skillfully. Stella Abrera continues to evolve — her arms a bit softer, her attitude somewhere between her earlier neon smiles and in following seasons, perhaps in reaction, an overt somberness. This couple performed a charming piece d’occasion at the gala, a ballroom duet by Brian Reeder. Muscular Isaac Stappas, designated bench presser of Manon, made a case for promotion in several demi-roles; perhaps next season it will happen, hopefully along with the sublime Cornejo as Romeo. And keep an eye on Blaine Hoven with his keen technical polish and humble yet luminous presence.