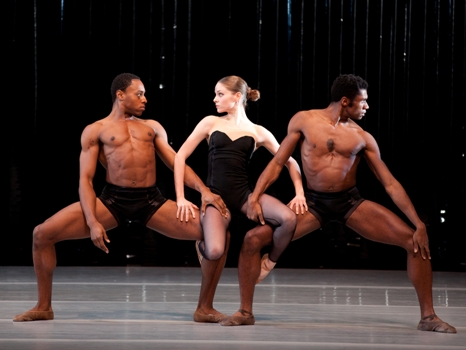 Cayetano Soto’s uplifting company premiere, “Kiss Me Goodnight,” presented July 8 and 9, brought things to the point that if the audience had been allowed to flick on cigarette lighters and wave their arms in time with the music, it would have. It’s a bring-down-the house kind of ballet that ASFB should keep in its repertoire for a long time.

The dance is set to a medley of tunes by the band, Beirut, started by Santa Fe, N.M., native, Zach Condon. Beirut straddles the world music and indie rock genres and is influenced by the traditional sounds of Eastern Europe. Soto, a Spanish choreographer, is a product of European dance companies, where the term “ballet” simply means “dance,” and the opaque and meandering Pina Bausch-style “Dance Theatre” is alive and well.

Soto seems inspired, in “Kiss Me Goodnight,” to express sweet memories. The light that breaks through this artist’s usual darkness is a magical one—the colorful glow of living room Christmas trees, fireworks and Disney animation. There is not a whiff of cynicism. Clearly, the Aspen Santa Fe dancers found much joy within this visual wonderland.

While the outstanding lighting design by Berry Claassen may have created some of the magic, the dance itself, with its egalitarian use of lines, swinging limbs, and nose-flutes played by the dancers (including a version of “Mr. Sandman” coming in from the wings) works to build an ambience of love—the universal rather than romantic kind.

If only a similar sense of wonder could have bubbled up during the premiere of a new piece by Jorma Elo. The Finnish choreographer, who created his new work, “Over Glow,” on the company, uses gorgeous orchestral music by Mendelssohn and Beethoven, but seemed caught in a rut, choreographically, with the dance working against the music, each phrase littered with nervous tics.

Elo danced for the Nederlands Dans Theater’s Jiří Kylián, who is the father of much of the disjointed ballet choreography seen today in Europe (and less so in the United States). In the right context, with the right music, this can seem fresh and exciting. However, jokey movement choices have their limit. When these frequently blunted endings stop looking playful and begin to become annoying, it matters not that the Aspen Santa Fe dancers are wonderfully adept at off-center movement and quirky gestures. Here, Elo’s choices chop up the lovely melodies from Mendelssohn’s Italian Symphony. At least in the adagio movement, set to Beethoven’s Violin Concerto in D, there is an exploration on the part of the choreographer of the flow and finesse of the music, not as much a choreographic “dis.”

If anything is worth treasuring in this new dance, it is that central section, where Samantha Klanac offered some of the most elegant dancing she has done in Santa Fe, Katherine Bolaños and Katie Dehler were equally sumptuous, and the partnering offered by Sam Chittenden, Seth DelGrasso and Nolan DeMarco McGahan was seamless.

In a repeat of Kylián’s “Stamping Ground,” Emily Proctor, William Cannon and Joseph Watson made an unlikely trio but suffused the lightness of the dance with a physical commitment that turned it into something powerful and fine.