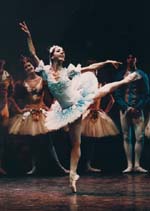 For a long time the embargo on Cuban goods deprived people on this side of the water of more than cigars. From 1979 to 1998, some of the finest dancers in the world were not allowed to perform in the U.S. But sanctions come and sanctions go and recent visits by the famed Ballet Nacional de Cuba are one of the great benefits of the changing times.

Ballet has long been a part of Cuban culture. Pavlova danced Giselle in Havana as far back as 1917. And, in 1948 when the legendary ballerina Alicia Alonso left the American Ballet Theater to return to the land of her birth, dance history was made. As founder and principal dancer of a new company, Alonso &#150; now in her 80s and nearly sightless but still active in the troupe&#146;s operation &#150; re-choreographed some of the great classics and commissioned new works. An annual international ballet festival has been hosted in Havana for the past 41 years.

In 1999 the Cubans returned to Berkeley after an absence of 20 years. The vehicle was Giselle, one of Alonso&#146;s signature roles in her performing years. Ballet Nacional de Cuba is back in Berkeley this weekend with another full-length classical ballet. Not the betrayal-and-death scenario of Giselle or Swan Lake, but the ebullient comedy of Coppelia, choreographed by Alonso after the Petipa original.

This sunny tale by E.T.A. Hoffman (a version appears in the &#147;Olympia&#148; segment of Offenbach&#146;s opera, Tales of Hoffman) deals with the archetypal theme of toys coming to life. Coppelius, a crotchety old toymaker, has made a doll so lifelike that all the boys of the town &#150; including young Franz, who is betrothed to the mischievous and resourceful Swanhilda &#150; fall in love with her. Swanhilda filches Coppelius&#146; key and invades the toyshop with several of her friends. After setting all the mechanical dolls in motion in a scene reminiscent of Act I of The Nutcracker, Swanhilda dons her inanimate rival&#146;s clothes. Franz enters through a window to more closely see the object of his desire just as old Coppelius returns. Pretending to be friendly, the old man gives the suitor a drugged drink, hoping to capture his soul to put into the body of his beloved daughter-doll. Enter Swanhilda, dressed as the doll. She wreaks havoc in the shop, pretends to become alive and distracts the toymaker in order to waken Franz and allow them both to escape. The third act celebrates the wedding of the two live lovers with much rejoicing and the usual divertissements.

The setting is Galicia (which a companion informs the reviewer is synonymous with Poland) and composer Leo Delibes took the occasion to insert numerous folk dances into his score. Unfortunately the mazurkas, czardas, polonaises and the rest were performed on tape, the one disappointment of the night. Live is better when it comes to music for dance.

But ballet is largely about sight and, if the sound was disappointing, the visuals were dazzling. With a Ukrainian fantasy of a backdrop and lavish costumes whose cost might keep a family of campesinos for several years, Coppelia was a feast for the eyes. Not to mention the dancing. Trained in the school Alonso founded in 1950, the Cuban dancers are long in technique. Wonderfully expressive, with a perfect line, Lorna Feijoo can act as well as dance. She went from petulant and mischievous in Act I to utterly adorable in Act II where she was first a marvelous mechanical doll, then a sultry Spanish siren and a high-stepping Scottish lassie, all in the service of confusing the old man and saving her swain. In the Act III pas de deux, she was positively ethereal, seeming to float upon the air.

Joel Carreno was pleasingly boyish as Franz. He has an impressive elevation but he stumbled through a few steps, marring his performance a bit. Felix Rodriguez took the character role of Doctor Coppelius, requiring a good deal of palsied shaking and waving of his walking stick. Two standouts in solo turns were Laura Hormigon in the Act I Czardas and Ivis Diaz, brandishing a lily in Act III.