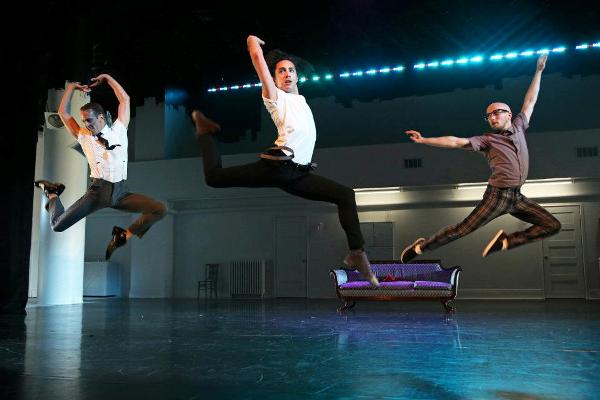 From left: Adam Hundt, Will Laury and Colby Damon in “MashUP,” choreographed by Adam Hougland
Photo courtesy of Ballet X

The summer program of Ballet X had the feel of a happening, with the buzz in the Wilma Theater lobby as hot as the July breezes outside. The troupe is on a roll with new grants and a very loyal fan base, and just as generous in spirit, letting a bagpipe musician and flamenco dancers take the stage during the intermissions. Company directors Christine Cox and Matthew Neenan usually trade off choreographing, but they sat this one out, inviting three guest choreographers.

Each choreographer used the set of the Wilma’s current production of “Angels in America” and took full advantage, in different ways. Tobin Del Coure’s “Beside Myself” plays on the theme of inner turmoil and relationship communication. Allison Walsh and Anitra N. Keegan are in different corners of a very cold room in shadowy distress— they mimic each others’ movements, full of fragments of steps and jerky physicality. The crashing industrial soundtrack by Ben Frost scores the dancers meltdowns. Enter Colby Damon and Jesse Sani, smoothly creeping in like thieves, but also a bit movement psycho. Eventually Damon and Walsh dance a lovers’ duet, beautifully, to plush New Age sounds of Sigur Ros. Keegan and Sani, embodiments of inner doubt, remain in the shadows.

Coure hedges his bets and scrambles the front half with crowded choreography, and even though it plays to the theme, it is frustrating and static, even with a lot of dancing amok. But, past that, this quartet danced this piece with conviction and clarity.

“Mash UP” by Adam Hougland is Pink Flamingo-y camp set to a medley of songs by Big Daddy of hits interpreted through an early 1950s pastiche. Bruce’s “Dancing in the Dark” is rockabilly, with the guys and gals crowded on a couch and pairing up except for dorky Damon, in his Coke-bottle glasses and madras pants hiked up. In fact, he is a “Super Freak” and gets to dance with Jaime Lennon with a rose in his teeth, in a tangled tango that runs out of steam fast. Later, Lennon wiggles through her good-girl persona during “Like a Virgin,” leaving the guys, like Gypsy, panting for more.

The guys do a literal dance to “Money for Nothing” (reworked to the beat of “16 Tons”) with Willy Laury ending up being the rich F—-t, of Dire Straight’s offensive lyric, who is the envy of everyone. Laury, a very gay gigolo preening, is also very droll; otherwise this was all pratfalls and mugging. Later the men are whipped into shape by Tara Keating, who puts the “dom” in matrix, floating in mile-high boots and a Dita bang bob. Tara, as always, got the moves, but Hougland doesn’t move her much. Who cares though; by the time they get to the syrupy version (even more than Babs and Neil) of “You Don’t Bring Me Flowers,” the gang is in oscillating bloom with those roses again, a la Busby Berkeley. Hougland’s comedy is raffish, even inspired, but he needs to inject more dance.

“Differences in Sections” by Darrell Grand Moultrie was the most ambitious work. The company floods the stage with classical and modern phrases bouncing around each other. Chunks of Moultrie’s “Sections” boast cohesive groupings and meaty breakaway solos. Moultrie’s mixing disparate styles is interesting, but not without risks, and there are chaotic moments that read as aimless. An arresting solo, with Walsh coming through a door with a blast of light, clawing at the wall and repeatedly flinging herself to the floor, is mesmerizing and too overwrought. The men’s dance that followed, with fine unison work, hit one choreographic note and stayed there. Then the women dance in a more driving section, but Moultrie kept building the momentum with anemic resolutions. The finale though, brought the full company on in a lush unison, if incongruent, end piece.

So, a mixed bag from Ballet X. But any deficiencies or dicey material were swept away by the lusty applause of this audience for this program. What do I know?

Anitra N. Keegan is retiring from the company after five distinguished years dancing with gorgeous artistry and countless moments of thrilling craft.