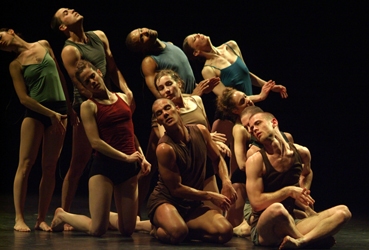 Many in the audience for Batsheva’s “Max” were displeased by the company’s new production at the Novellus Theater. Because this is the third time Batsheva has appeared in San Francisco, some expected the athletic, Israeli-themed material choreographer Ohad Naharin had done before or perhaps modern dance in the style of Martha Graham. Instead, “Max” brought long moments of stillness, abrupt changes in facing and posture and the well-publicized moves called Gaga (not to be confused with the lady using the same name).

Gaga, as used by Naharin and this company (and it’s catching on in the larger dance community) involves “work more from the sensation of it (the move), or the drive of it, or the energy of the movement.” This, for many of the dancers, is an extreme change from the “replication of a precise image,” which is the standard. Thus, “Max” presented undulating torsos, extreme runs and jumps and movement unique to each dancer in solos, duets and ensemble.

Thematically, the piece seems to be about time and context, albeit listening, counting or responding to gibberish language. The dancers wear earbuds, through they hear counts and vocals. We, the audience, hear these language shuffles sporadically, wondering what is said and why. A dominant section repeats over and over, counting to ten in a variety of distorted words, recognized by the repetition more than the enunciation. The dancers repeat action moves.

The company is extraordinary in its ability to sustain physical stamina, produce a range of movement and provide a sense of humor and intense performance focus. The women appear to be stronger in their variety of torso undulations and general physical power. The men leap and turn in traditional ballet vocabulary but join in all explosive action. As an ensemble, Batsheva is a fine-tuned instrument.

The dancers, who come from many countries, are: Shahar Biniamini, Iyar Elezra, Doug Letheren, Shamel Pitts, Matan David, Shani Garfinkel, Rachel Osborne, Ian Robinson, Bobbi Smith, and Adi Zlatin.
They all demonstrate great skill and in various program notes, give credit to Naharin’s inspiration and his innovative and challenging choreography.