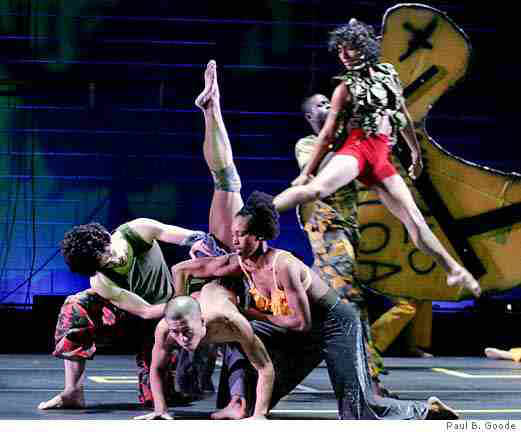 Bill T. Jones has been running his dance company for 24 years. Arnie Zane has been dead for 18. The journey that began as a youthful art exploration with a lover has become something of a dance-world anomaly. How has this well-meaning, intelligent and outspoken man managed to go so far as a dancemaker with a facility for choreography that is, unfortunately, so limited?

This is an era when actual modern dance technique and choreographic innovation is being subsumed by video, by theatrical effects, by narrative and hip hop and by, believe it or not, ballet. The original revolution that was modern dance is now a century old and what remains to be said is, perhaps, unsayable: that the unique and original possibilities of movement are still as vast and uncharted as those of the human body, as those of the beholder, of movement and the eye.

Perhaps what this new century will bring is the end of the modern dance cliche, the primacy of the "auteur," that the dance company should be a choreographic wonderland for one person. In this age of web-logs, it is no longer the singular voices we seek, the expert, authoritative, even the genius&#151;nowadays we want lots of different opionions. Perhaps in this century there will be no second Martha Graham, Merce Cunninghan, Mark Morris or an artist like Bill T. Jones, who knows how to seize the attention of the media, who commandeers art and politics, and who is an excellent spokesperson for himself. Is there any need for real genius in dance anymore?

A case in point was Jones&#146; production of the relatively new work, Blind Date. Using enigmatic bits of text offered with a poltical bent in a personal, self-referential context, the full-company work Jones created was about as moving as an op-ed piece in the New York Times. All the bells and whistles were there, video screens and theatrical effects galore&#151;the flats and set-pieces of old-school ballet have been replaced by software-generated presentation that allows for a 7-ring circus of images. But all the stagecraft also takes the hook off Jones the choreographer. You don&#146;t even need to look at the dance if you don&#146;t want to. But when even his textural statements begin to repeat themselves unimaginatively after an intermission and 40 minutes, rather than build, or change or combust, the question becomes: so what?

The company looks extremely young, except for Jones, the chisel-chested Adonis of modern dance who has been naked or at least topless in every piece for decades. The choreographer, now in his 50&#146;s, has apparently passed the point of no return. He no longer offers skin (at least in this piece), the way he moves is brittle (he had knee surgery recently) and the short-cropped Afro he now sports is silver. He is not in denial, like Martha Graham, who was still playing love objects and heroines in her 80&#146;s, but the generation-gap between him and his dancers seems jarring, especially since this dance is about stories and feelings and the world. He clearly comes from a different era than those whom he has charged to present his ideas.

There are attempts to present biographical bits about some of them&#151;naturally the more multi-culturally interesting dancers (a Taiwanese man and a Turkish woman), but these segments seem, at best, stabs at political correctness.

Jones, in the past, would never have given a damn about political correctness.