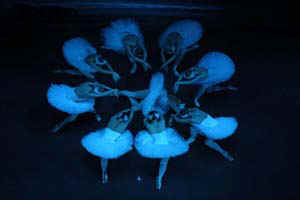 The United States of America and the Bolshoi Ballet were founded in the same year, 1776. Since its Revolutionary beginnings, this country has weathered civil &#150; and several other &#150; wars, Reconstruction, and the Great Depression to emerge as the preeminent power on the world stage. The Bolshoi has survived the Russian revolution, plus tsars, commissars, glasnost and the economic and political chaos that accompanied freedom. Through it all it has remained a cultural icon, the greatest classical dance troupe on the world&#146;s stages.

Icon to icon: for many, Swan Lake is the very definition of classical ballet. This work has a rather venerable history of its own. First choreographed in 1877 by the great Marius Petipa for the Bolshoi, it has been tweaked by almost every choreographer to get hold of it down through the years, beginning with Petipa&#146;s assistant, Lev Ivanov. In our own day we have had an all-male version out of Great Britain and a Swedish gender-bender in which everybody wears tutus and everybody is bald, among other incarnations.

The one the Bolshoi brought to Berkeley on Cal Performances’ series at UC&#146;s Zellerbach Hall this week is a more traditional reading of the tale of the doomed love of a fickle prince and an enchanted swan/maiden. Created by former Bolshoi artistic director Yuri Grigorovich in 1969, it became an instant cause celebre after the Soviet regime nixed the suicidal climax as being politically incorrect. The subsequent revision leaves Prince Siegfried to mourn his lost love center stage, not unlike that other dancing philanderer, Albrecht of Giselle.

Almost as controversial at the time was Grigorovich&#146;s attempt to add a psychological dimension to the proceedings, the evil sorcerer cast as the dark twin of the hero-prince. But, in this performance it was less about psychology and more about dancing. And what dancing! From the Prince&#146;s first entrance in a series of heart-stopping leaps to the final fluttering of the swans, the Bolshoi fully lived up to its name, which translates from the Russian as &#147;Big.&#148;

The corps, some 100 strong, didn&#146;t make a false step. There were more gorgeous girls on the stage than at a Miss America audition. The guys were pretty cute, too. The soloists did exquisite work, especially the five pretty princesses that vied (unsuccessfully) for the Prince&#146;s affections. The Four Little Swans brought the house down with their precision and form. Another nice Grigorovich touch was mixing up the white swans with the black in the final scene.

You want to talk character dancing? The Court Jester, a most welcome Grigorovich addition to the two ballroom scenes, was nothing short of wonderful. Morihiro Ivata filled his shoes on opening night but those shoes were rarely on the ground as he jumped with astonishing elevation right into the audience&#146;s heart. Dmitry Belogolovtsev was the menacing Evil Genius, the one who enchants the swans, keeps the lovers apart, tries to pawn his own daughter off on the Prince and generally mucks things up. He danced well but, as for acting, there&#146;s only so much you can do with a guy like that &#150; most of it melodramatic.

And now to the main event. Her name is Odette when she is wearing a white tutu and Odile in black. Danced exquisitely by Nadezhda Gracheva, she was ethereal and mournful in the first incarnation and all confidence and mastery in the second, everything you would expect a Bolshoi prima ballerina to be and perhaps a little more. The famed Second Act Adagio was an elegiac poem in motion (Gracheva, the saddest Swan Queen I&#146;ve ever seen, never broke character once, even when taking her bows). As the Black Swan, she knocked &#145;em dead with the equally famous 32 fouettes.

Andrey Uvarov was her Prince and, aside from a couple of uncertain landings during his solo turn in the entr&#146;acte between Scenes One and Two, acquitted himself in a princely manner.

The costumes were sumptuous, as was the set, although the latter was a little misguided in the use of tattered-looking veiling that looked like it came from a resale shop or Miss Havisham&#146;s decayed wedding feast inGreat Expectations. And someone might have a talk with the wigmaker about those Prince Valiant dos for the vassals and a redheaded Queen who could only pass for normal in Berkeley. Members of the Berkeley Symphony did justice to Tchaikovsky&#146;s lovely score, under the baton of the Bolshoi&#146;s own Alexander Sotnikov, with special kudos to first violinist Stuart Canin. He had a lot to do and did it beautifully.