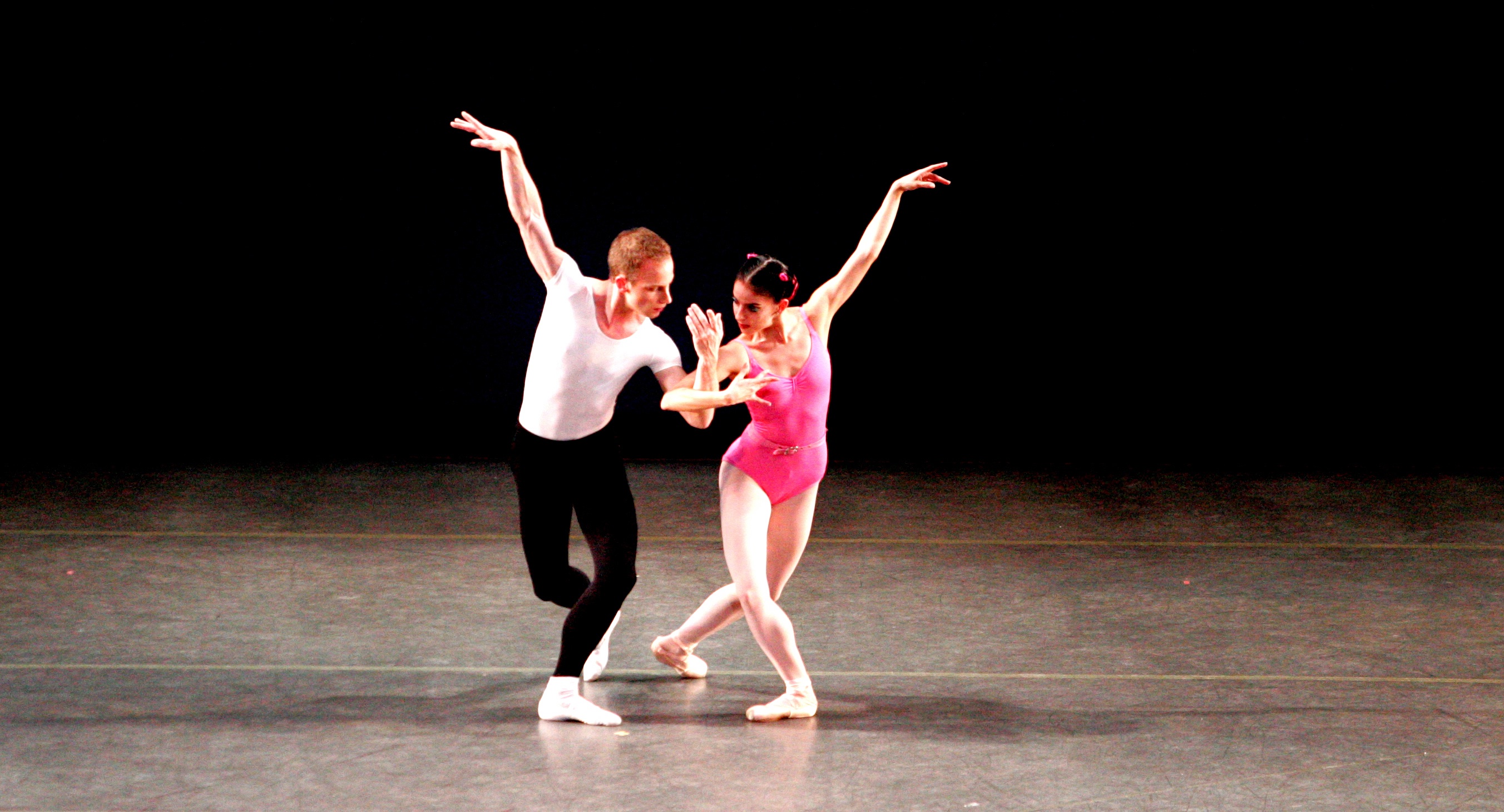 The only thing missing at the Miami City Ballet’s Auditorium Theatre performance was a gunshot. To start the race, that is.
From the program order to the featured choreography, the evening ran like an invigorating 10K.

The company started their race as a pack in Balanchine’s Symphony in Three Movements.  The rising curtain unveiled a diagonal stretch of 16 corps de ballet dancers dressed in pure white leotards.  These women provided a stable structural framework for the ever-changing action at center stage.  A movement vocabulary of high steps and prances likened the corps to a military drill team of sorts; a soloist clad in pink performed a series of piqué turns in a circle, avoiding the corps as they rotated in an x formation.

The same soloist was showcased in the second movement, a pas de deux with Balinese influence.  Quickly flexed feet and hand isolations gave emphasis to moments of musical flourish while providing contrast to the otherwise traditional balletic movement.  While some lifts evoked marionette-like imagery, moments of hip gyration and romantic embrace between the dancers displaced any case for sterility as a major theme.

The third movement saw the return of the entire cast. Balanchine’s choreography explored sensory overload, at times creating a sea of barely distinguishable moving bodies.  Stillness was utilized for resolution and contrast, either in isolated groups of dancers or spanning the width of the stage.  A facially aggressive male trio also provided unexpected contrast within the upbeat, pleasant atmosphere of the overall piece.  Such aggression returned in the menacing final pose; the men skulked low to the ground as if ready to pounce on the audience.

Valse Fantasie packed awe inspiring moments for each member of its dancing quartet.  Soloist Daniel Sarabia showcased the height, split and loft of his leaps while another dancer impressed with a grande battement sequence en pointe.  Bursts of applause from cheerleaders in the crowd kept the momentum going for the stretch of the piece.
Principal dancer Mary Carmen Catoya gave a flawless performance in Petipa’s Black Swan Pas de Deux.  Multiple series of pirouettes executed with ease flowed into endlessly radial side extensions and arabesques.  Catoya fully embodied the allure and mystery of Odile (the black swan), effectively seducing partner Rolando Sarabia.  Sarabia’s solos late in the piece proved his virtuosity, a worthy match for that of the brilliant Catoya.

Twyla Tharp’s In the Upper Room reunited the pack for the evening’s final lap.  Over the course of its nine movements Upper Room created a harmonious division in the ensemble.  Weighted patterns in an upstage quartet mirrored the cyclical string underbelly of the musical composition while downstage lifts rode the upper arc of the woodwinds.  A female duet in red pointe shoes punctuated the piece with quick passes of petit and grand allegro.  Adept precision made these moments of quick footwork, turns and leg extensions a marvel to view.  As the piece progressed, dancers became increasingly gendered; articles of clothing were shed offstage, introducing red fabric and naked flesh into the smoky atmosphere. The final movement reunited the full cast in a community release, in an indulgent celebration of the group’s cumulative energy.
With Twyla’s final push (and some help from Balanchine and Petipa along the way), the Miami City Ballet broke the tape in high spirits.

(236)
$7.49 (as of January 25, 2021 - More infoProduct prices and availability are accurate as of the date/time indicated and are subject to change. Any price and availability information displayed on [relevant Amazon Site(s), as applicable] at the time of purchase will apply to the purchase of this product.)