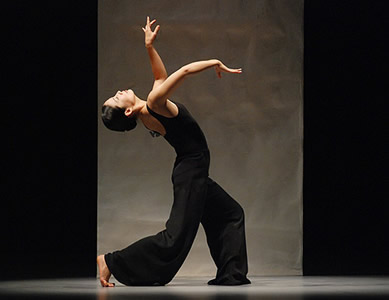 Calligraphy and choreography share a canvas in Cloud Gate Dance Theatre’s final chapter of Cursive: A Trilogy, with choreography by Lin Hwau-min, presented as part of BAM’s 25th Next Wave Festival. Dancing is a kind of mark making, with the ink visible for only as long as we can perceive the movement; as soon as it’s made, it’s unmade by the next move. Having missed the first two sections, I am coming in a late in the story with chapter three, known simply as Wild Cursive.

The piece is based on Kung Chao type of "wild calligraphy,” which according to the program, “frees characters from any set form and exposes the spiritual state of the writer in its expressive abstraction.” The structure of Wild Cursive follows the laws of nature, ebbing and flowing, with groups collecting and scattering. Dances appear and disappear much likes ocean waves, with no hard boundaries.

The dancing remains the reason to see Cloud Gate. Trained in traditional forms of dance and martial arts, the performers possess a fluid control that allows them to take and surrender shape in the most startling ways. In one passage a dancer imitates a wave lapping against a shore. In another instance, a dancer folds like a leaf in mid-Autumn. Limbs don’t begin in the usual places as the body here forms a more organic entity. It’s astonishing to watch the quality of movement in these sequences.

Translucent rice scrolls with fresh dripping ink come and go dividing, containing, and concealing the performance space. Certainly the movement of ink and body have a collective unity as the dance borrows its structure from the path of meandering ink.

The body as brushwork in space is a rich idea. Still, as elegant as Cloud Gate movers are, I wonder if something got lost in the translation as wild they are not. The overall tone exudes such a calculating sense of control, which, in the end, remains too constrained to be in the wild zone.