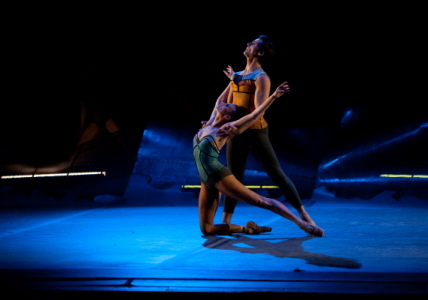 The Corella Ballet may not yet be a household name. It was founded two years ago by veteran ABT principal dancer Angel Corella. For 20 years Spain had lacked a classical ballet company; in 2001, Corella took it into his own hands to remedy the situation, creating a foundation to promote classical ballet for his home country. The company emerged out of the foundation.

The highlight of the evening was the breathtaking pas de deux, “Soleá,” performed by Corella himself and his sister, Carmen Corella. Choreographed expressly for the two Corellas by María Pagés, “Soleá” is a marriage between classical ballet and flamenco. That is the official description; it is much too dry to capture the playful but competitive connection displayed by the two dancers. Rather than coming across like a signature piece, it appears spontaneous and fresh. Both dancers bring a high level of expressiveness in addition to near perfect technique. It is bewitching to watch, leaving one with the feeling, “Couldn’t they do it again… just this one time … for me?”

Carmen Corella stands out as a beautiful and powerful dancer in her own right. As a principal she performed in all but one selection on the program and demonstrated her considerable strength, stamina, and versatility. Her performance is modern, but her technique is classical. In “Clear,” a piece set by Stanton Welch in response to the events of 9/11, she is as powerful as the male dancers for whom it is a showcase. Perhaps the most exciting moments come when she dances with the male trio, Yevgen Uzlenkov, Fernando Bufala, and Toby Mallit. Though a certain angularity communicates the anger all of America was feeling, the lifts the trio executes are only possible with near perfect classical technique. While whirling arms are at times excessive, the rest of “Clear” does clearly convey the national rage, albeit not the connection to 9/11.

The demanding program covers a range: it opens with Clark Tippet’s choreography to “Bruch Violin Concerto No. 1,” all in tutu. It closes with Christopher Wheeldon’s 2006 work, “DGV.” Michael Nyman’s score for “DGV” had been commissioned by the French national railway company to commemorate the renowned 1993 debut of France’s high-speed train, the TGV. It was entitled “MGV: Musique a Grande Vitesse.”

The corps in “Bruch” is exceptionally strong in classical technique. Composed in 1868 and choreographed in 1987, the work is punctuated by strange arm positions apparently to bring in a modern tone. The four couples that are showcased have varying levels of success with the slight mixture of style. It is a particular challenge for Kazuko Omori, who stands out as being uncomfortable with the positions and is consequently inflexible, particularly in the lifts. On the other hand, Natalia Tapia and her partner Aaron Robison effortlessly combine the classical and the contemporary.

Tapia and Robison again partner in “DGV,” the closing number. Rather than being an updated tutu exhibition, it is a modern piece, both as to choreography and score that happens to be performed (very successfully) on point. This is a direction the company might be wise to pursue. Whereas “Clear” was not such a clear reference to 9/11, anyone watching “DGV” without a program would have no doubt that a train was an important part of “DGV.” Lest this sound corny, it is not. The only bone I have to pick with “DGV” is: could you possibly dial down the volume a bit for those of us whose hearing has not been damaged by rock concerts?

All in all, the Corella Ballet is a very polished company for being but two years old. It is a company to watch. Would it be nice to have seen more of Angel Corella? Absolutely, but sometimes you have to take what you can get and “Soleá” is sublime.