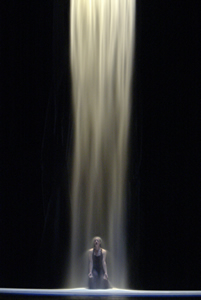 Nacho Duato is both Artistic Director and Choreographer for Compañía Nacional de Danza, and judging from one evening’s exposure to his work, his dances can be mercifully old-fashioned. In current European styles, such elements as musicality and narrative structure are strictly passé. This, however, is Modern Dance with a Martha in its past, and like Martha Graham’s work, the bodies are strong and grounded. This is not ballet in bare feet.

Dancers in this dance and throughout were stunning, both in their attack on the rather idiosyncratic movement, and in their virtuosic, completely abandoned-looking release into it.

Theme-driven dances can exhaust instead of inspire, especially if there is more than one such piece on a program. Duato flaunts this rule with ease in light of the way he approaches his themes. Castration is handled as an unstated narrative tension, a young boy’s initiation to some unstated fate (albeit with a few melodramatic minutes at the end). Duato seems clearly more inspired by male bodies and music (Vivaldi here)than castration. The drama is eclipsed by all the sweat and athleticism.

“White Darkness”, an anti-drug piece, also avoids Boishoi-style kitsch by concentrating on flawless group unisons, even if a female dancer is stuck in a white powder (or sand) shower immediately after a gut-wrenching, exhausting bit of thrashing virtuosity. “Rassemblement”, a 1990 piece with a Haitian, voodoo theme, manages to please with solid group dancing, especially because the music, by Toto Bissainthe, adds new flavors to the traditional rhythms of the Haitian sound and the choreography manages not to look derivitive, like some kind of vaudevillian cultural imitation.